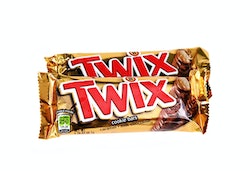 Deliciously indulgent spreads are nothing new — Nutella might be passed off as breakfast when spread on toast but it definitely feels like a treat. Meanwhile, Lotus Biscoff butter brings everything good about one of the best biscuits around to bread. And now there's another excuse to treat yourself first thing in the morning — yes, Twix Spread exists and here's where to get it in the UK.

Recently, Canada-based sweets and chocolate retailer, Candy Funhouse announced that they’d be stocking a Twix, Bounty, and Milky Way spread. Promising to be the spreadable version of some of the best-loved chocolate bars out there, the announcement understandably caused quite a stir among Instagram-users. The Twix spread has a caramel and chocolate base with crunchy biscuit bites. Whether you’d eat it alongside your breakfast or just with a spoon it sounds seriously good. On their website Candy Funhouse are selling the spread for $8.99. However, if you’re from the UK and have a sweet tooth you don’t need to fret.

This isn’t the first time that a Twix spread has been released. In 2016 the Mirror reported that Milky Way, Malteaser, Twix, and Bounty spreads would be available in UK supermarkets. At the time the publication said they’d be available at Asda. However, they no longer seem to be available online.

While it appears to no longer be in UK supermarkets, you might still be able to get your hands on the Twix spread. Alongside Bounty, Crunchie, and M&M spread you can buy the Twix spread on Amazon. It costs £6.75 and one person left a five star review, writing “bought this for my fiancé for his birthday, he had it on his porridge every day and said it was divine! Had to take his word for it...he wouldn't share!” Like you need any more persuading.