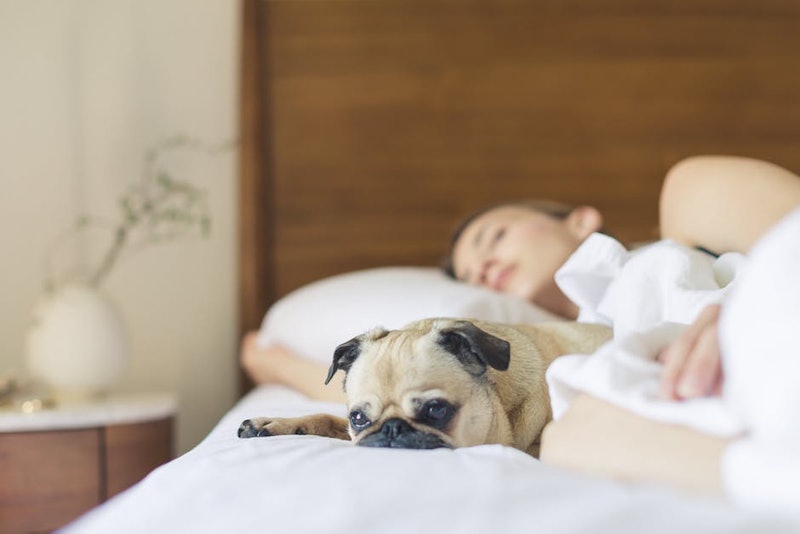 If you're like most people, you likely have a pretty intimate relationship with your pillow. Not only do you sleep on it every single night, but it's there to cradle your face as you cry, sneeze, and pass out with all your makeup on. That thin sheet of fabric sees the best of times and the worst of times, and as a result some pretty gross things can happen when you don't wash your pillowcase at least once a week.

If you're not swapping that baby out for a clean version on the regular, you're likely exposing yourself to a whole host of nasties that can make your skin break out and your allergies worse — among other things. It's so easy to forget, but it really is important to wash your bedding more regularly, all in the name of better health.

"Most dermatologists recommend changing your pillowcase no less than once a week," Dr. Josh Axe, DNM, CNS, DC, a certified doctor of natural medicine, tells Bustle. "If you're prone to acne then more often is better. You can change it every day if you find it helpful, but remember you can use both sides first. The more often you change your pillowcase, the less unwanted substances (like bacteria, oil, etc.) there will be between your skin and the pillow, which means less likelihood of irritation and breakouts."

And, the less likely you'll be to encounter the other gross things that can happen if you don't throw that thing in the washing machine. Read on for a few gross examples.

1. Dirt And Oil Can Build Up

While your pillowcase may look clean at first glance, there's actually all sorts of tiny but nefarious things going on. "Not washing your pillowcase regularly results in a build-up of many things including oil, dirt, dead skin cells, and even breakout-causing bacteria," Axe says.

2. It Can Get As Germy As A Toilet Seat

Not to freak you out too much, but a particularly dirty pillowcase can even give a toilet seat a run for its money when it comes to bacteria. "Scientists have ... found that bacteria samples from toilet seats and pillowcases are almost identical," Axe says.

3. Makeup Remnants Can Build Up

Are you in the habit of falling asleep with your makeup on? If so, the evidence really can add up over time. As Axe says, "Your pillowcase is ... likely to harbor remnants of makeup and skincare products as well as hair products, all of which can lead to facial irritation and acne."

If you think you're sleeping alone at night — save for maybe your partner, or your pet — think again. "Pillowcases pick up dead skin, which dust mites love," says Dr. Ivan Ong, the VP of research and development at Microban. "An unwashed pillowcase can attract lots of dust mites, which in turn can accentuate issues for asthma and allergic sufferers."

5. Your Allergies Can Flare Up

Speaking of allergies, pillowcases are basically magnets for dust, skin cells, and other allergens. "Dead [skin] cells are a smorgasbord of amazing chow for dust mites," Dr. Elizabeth Trattner, an integrative medicine practitioner, tells Bustle. "Dust mites is one of the biggest allergens that can make you wake with a stuffed nose, allergic shiners, or worse — asthma."

6. Your Pillowcases Can Get Stained

OK, so this one's a little further down on the "gross" scale. But overly used pillowcases can become stained and wear out faster, if you don't wash them often enough. "Acne meds with retinols and benzoyl peroxide will bleach and thin out fabric," Trattner says. And that will leave behind those telltale white stains and splotches.

7. You'll Be Lying In A Puddle Of Drool

Even though you can't see that damp pool of drool on your pillow, it's there. And it's chock full of bacteria. "If you are a side or stomach sleeper, there's a higher chance of more gross body fluid getting on your pillow case because of gravity," Trattner says.

8. Things Can Get Extra Sweaty

Another bodily fluid that's likely to build up? Your own sweaty sweat. As board-certified dermatologist David Lortscher tells me, if you tend to perspire a lot while you sleep, you'll want to consider washing your pillowcase at least once a week, to stave off bacteria. Or, you might consider sleeping with a clean t-shirt over your pillow every night, which you can swap out instead.

In more extreme cases, ongoing dampness from the sweat and drool listed above can cause certain types of mold to grow, and it can creep into other areas of your bed. "One type of mold, Cladosporium, grows on damp mattresses and can lead to asthma, pneumonia, and a fungal infection called Onychomycosis, which can cause skin lesions and crumbling toenails," said health writer Kelli Acciardo, in Redbook. Yikes.

10. You'll Breathe In Whatever Was On Your Pet

If you let your pet sleep in your bed, or worse — on your pillow — then do know you'll be resting your head on a pile of whatever they tracked in. Think along the lines of outside allergens, hair, and possibly even remnants of poop.

Lack of sleep isn't gross, but the unhealthy side effects — and your groggy self — might not be too cute. "Those nights of restless sleep can actually be traced back to a dirty pillow," noted lifestyle writer Angela Elias, on PopSugar. She pointed to a study, which reported 10 percent of people and 80 percent of allergy sufferers are allergic to the proteins found in decomposed dust mites often found in pillows.

So yea, wash those, too. OK? The more often you change your pillow cases and wash your sheets, the less often you'll have to deal with these super gross consequences.

More like this
The Best Wines For Literally Every Type Of Holiday Gathering
By Christina Amoroso
Dorinda Medley Has Holiday Hosting Down To A Science
By Brittany Leitner
Many Skin-Care Actives Degrade By 40% Within 8 Weeks — This Innovative Company Is Fixing That
By Lauren Moison
Designers Say It's Surprisingly Cheap & Easy To Fix These Eyesores Around Your Home
By Laura G.
Get Even More From Bustle — Sign Up For The Newsletter