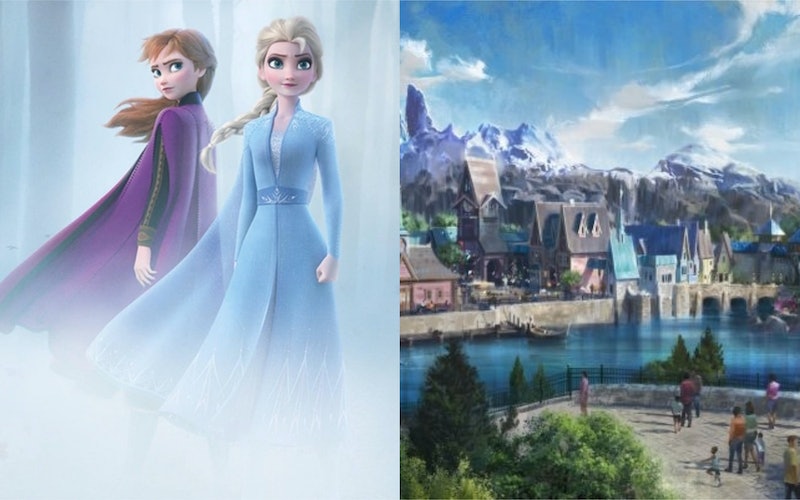 Big news for Frozen fans — and no, I’m not talking about the upcoming release of Frozen 2 (Nov. 22, friends!): A Frozen land is coming to Disneyland Paris sometime in the near-ish future. We don’t know exactly when yet, but this week, the Disney Parks Blog revealed more details about the current multi-year expansion project that’s going on at the Disneyland Paris resort — and, folks? It looks pretty spectacular. I mean, who wouldn’t want to run around Arendelle with Anna, Elsa, and the rest of the Frozen gang?

We’ve known that changes have been on the way for Disneyland Paris for some time now; a multi-year expansion for the resort was announced in February of 2018, with the clear focus being on improvements to the resort’s second gate, Walt Disney Studios Park. And even though details were scant at the time, the announcement did include the fact that three brand-new lands would be part of Walt Disney Studios Park’s transformation: One themed after Marvel, one themed after Star Wars, and one themed after Frozen. “The expansion plan — one of the most ambitious development projects at Disneyland Paris since the resort’s 1992 opening — underscores Disney’s commitment to the resort’s long-term success as its brand beacon in Europe,” said a press release about the announcement.

When Disneyland Paris began welcoming visitors in 1992, it had… let’s call it a rough start. Originally called Euro Disney, it ran way over budget and attracted far fewer guests in the first year that projected. Additionally, the company didn’t really consider how they might have to change their theme park formula to work in an international market, with the result being that what worked with U.S. audiences failed to appeal to French audiences. (Disney learned from this mistake, and subsequent international parks have gone much further toward catering to the cultures and countries in which they exist.)

After some big changes, however, including a lot of financial restructuring, the resort eventually started turning a profit; it’s since grown quite a bit, featuring not just the original Paris version of Disneyland Park, but also seven themed hotels, nature resorts, shopping and dining districts, and, of course, the Walt Disney Studios Park.

Not unlike the original Disneyland Paris park, Walt Disney Studios Park has also had a rough time since opening in 2002. A sister park to Hollywood Studios Park at Disney World in Florida, it suffered early on from confused theming and a lack of notable rides. But it, too, has picked up in recent years; for example, in 2010, it became the first Disney park to have a Toy Story-themed land — a concept which has proven to be so popular, it’s since arrived in three more of Disney’s parks worldwide.

The big multi-year expansion currently in the works hopes to perk the park up even more — and the plans are definitely capital B Big. In addition to the Frozen land, we also know now that the Marvel area will be the Avengers Campus (a land that’s also coming to California Adventure, with a projected opening date of 2020); additionally, one of the resort’s existing hotels, currently called Disney’s Hotel New York, is in the process of getting a major refurbishment and Marvel-themed makeover. When it reopens — hopefully during the summer of 2020 — it will be called Disney’s Hotel New York – The Art of Marvel. No further news has been made available about the previously announced Star Wars expansion, but it wouldn’t be surprising if it ultimately turned out that a version of Star Wars: Galaxy’s Edge, which opened at California’s Disneyland Park this past May and at Hollywood Studios in Florida at the end of August, is in the works for Walt Disney Studios Park.

We don’t know yet when exactly the Frozen land will open, but more details will no doubt be forthcoming. Keep your (mouse) ears to the ground!