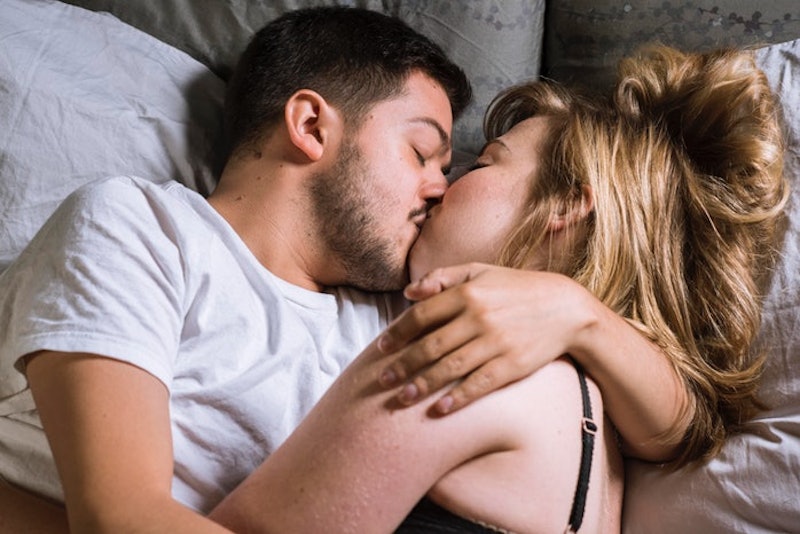 As science continues to advance, so, too, does the idea of a male birth control pill. Various researchers have been trying to create a male oral contraceptive for a while now. The latest? A potential male contraceptive pill that may prevent sperm from swimming… at least temporarily. The pill would be created from a compound known as EP055. And it works by binding itself to sperm proteins and slowing the sperm down, reports Medical Daily.

Dr. Michael O’Rand, president and CEO of Eppin Pharma, Inc. and retired professor of cell biology and physiology from the University of North Carolina, was the lead researcher of the study, titled “Inhibition of sperm motility in male macaques with EP055, a potential non-hormonal male contraceptive.” It was just published in the journal PLOS on April 19, 2018.

In fact, in 2004, Dr. O’Rand’s lab at the UNC School of Medicine discovered the protein Eppin, the protein that coats the sperm cell. They then created EP055 that would bind to Eppin — the combo causes the sperm to stop swimming. “Simply put, the compound turns off the sperm’s ability to swim, significantly limiting fertilization capabilities,” Dr. O’Rand told MedicalResearch.com. “This makes EP055 an ideal candidate for non-hormonal male contraception.”

Yes, you read that correctly — no hormonal side effects, which is amazing in and of itself since oral contraceptives for women do contain hormones. Dr. Sherry A. Ross, Women’s Health Expert and Author of she-ology, agrees. “EP055 is a very promising male contraception that does not have any hormonal side effects, which has been a major obstacle in creating an effective birth control for men,” she tells Bustle. “The notion of turning off and paralyzing the sperm’s ability to swim upstream to fertilize the egg is exciting.”

Though human trials have yet to be done, EP055 was tested on rhesus macaques, a monkey species native to northern India, according to Medical Daily. The monkeys received a high-dose infusion and, 30 hours later, their sperm couldn’t move. After 18 days, their sperm returned to their swimming state. Furthermore, no monkeys had negative reactions. So, a new potential male contraceptive that is not only reversible, but one that may not have side effects? This could be revolutionary for birth control.

However, no one can yet predict what affect EP055 will have in humans. Dr. Michael Krychman, Executive Director of the Southern California Center for Sexual Health and Survivorship Medicine and co-author of The Sexual Spark: 20 Essential Exercises to Reignite the Passion, weighs in on that issue. “It’s important to address issues of adverse effects in human males, and to ensure that hormones — especially testosterone — do not get altered,” he tells Bustle.

According to his interview with MedicalResearch.com, Dr. O’Rand said the research team behind EP055 is currently working on creating an oral version of EP055. In addition, pregnancy prevention would have to be tested in mating trials. Dr. O’Rand also said they’re working toward a phase one human trial.

Of course, it goes without saying that if EP055 were to work as a form of oral contraception for men, it would be a game-changer. “Even though more studies are needed, researchers are getting closer to having men join in on the responsibility of birth control,” Dr. Ross says. “Women have been waiting a lifetime to have men take the ‘control’ in birth control — the burden of preventing pregnancy has fallen primarily on women. A non-hormonal male birth control option would be a welcomed option for both men and women.”

Dr. Krychman is optimistic, too, but with a couple of conditions. “If hormones remain unchanged and it is reversible, where new sperm are unaffected and can swim again, it would be something men would consider. Otherwise, men may be apprehensive to jump on the bandwagon with respect to male contraception if it impacts hormones, affects their libido, and/or ultimately affects erectile strength rigidity.”

In any case, the prospect of a male contraceptive pill is intriguing. Meanwhile, until EP005 is tested in human clinical trials, all one can do is hope that they go well.