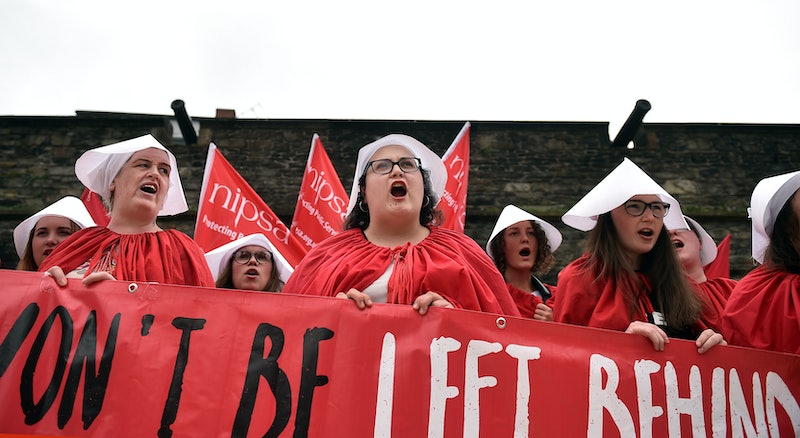 A 12-year-old sexual assault survivor who was seeking to terminate a pregnancy was forced to travel from Northern Ireland to England for an abortion — and a police officer accompanied her to "seize the evidence," as The Independent reports. Northern Ireland's laws do not allow abortions under most circumstances.

Dawn Purvis, who used to direct the Marie Stopes pregnancy advice service in Belfast, Northern Ireland, told The Belfast Telegraph that the police were present for the abortion itself. "The police had to go with her, they attended the surgical procedure to seize the evidence," she told the paper. "That is inhumane treatment of a young child who did not have a passport and had to leave the country."

Forcing women to travel from Ireland, often to the United Kingdom, for abortions has been the status quo for decades, with thousands making the trip each year. Last year, the Republic of Ireland voted to repeal the 8th Amendment, a constitutional provision that outlawed abortion. On Jan. 1, it officially became legal for Irish women to have an abortion through week 12 of pregnancy, and later if there were risks to the mother's health. The same is not true for Northern Ireland, which has its own abortion ban.

That puts Northern Ireland at odds both with the Republic to the south and also the rest of the United Kingdom, which legalized abortion in many circumstances in 1967. That legislation passed Parliament with wording that only made it applicable in England, Wales, and Scotland — leaving Northern Ireland behind.

Following the violence of the Troubles, which saw violence amongst those who wanted to keep Northern Ireland part of the UK and those who wanted a united Ireland, the way laws in the North work were changed. The Good Friday Agreement — which officially ended the conflict — allows for Northern Ireland to pass its own laws in many "devolved" areas, including over health and justice.

After the successful legalization in Ireland, many activists have pushed Theresa May's UK government to legalize abortion in the North, even though that would normally be considered a "devolved" area. May has said the issue should be decided locally, but there is no functioning Northern Ireland Assembly to address the issue. The legislative body is completely suspended and has been since January 2017.

The British Parliament voted in October to call for an explanation of the current law in Northern Ireland, calling it a human rights issue and asking Northern Ireland Secretary Karen Bradley to "issue guidance" on enforcement of the law there. "The absence of an assembly cannot be used as an excuse to ignore the human rights of the people of Northern Ireland," Stella Creasy, the member of Parliament who introduced the measure, told The Guardian

In June, the highest court in the UK ruled that the abortion laws in Northern Ireland are incompatible with human rights legislation, but it did not overturn the laws because the suit was brought by a human rights commission rather than an individual. Now, a woman who had to travel to England for an abortion has taken her individual case to court in an attempt to overturn the law.

Purvis, who spoke to The Belfast Telegraph about the case of the 12-year-old sexual assault survivor forced to go to England, has also spoken to lawmakers about the issue. She told the Commons Women and Equalities Committee about her time running the Marie Stopes pregnancy advice service. "We saw many young women we could not help, from the Roma or Traveling community, victims of domestic violence," she told the paper. "The law here does not help women."

Until the law changes in Northern Ireland, even the most vulnerable will be forced to go abroad.