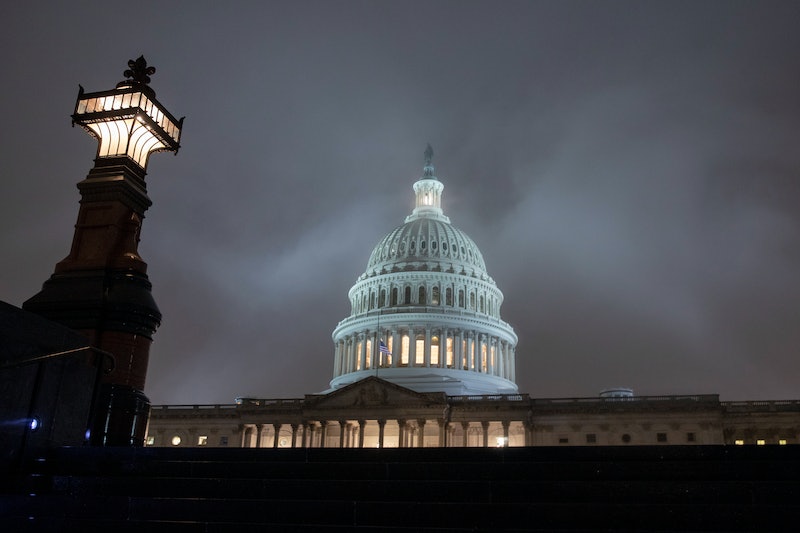 With Congress unable to pass a spending bill and the House of Representatives adjourning for the weekend, the American government is on track to partially shut down when the clock strikes midnight Friday evening. While it isn't expected to affect all areas of the federal government, President Trump has warned that the partial government shutdown "will last for a very long time."

Senators were forced to return to Washington on Friday after previously approving a spending bill expected to easily pass the House. That was until President Trump announced he'd veto any spending measure that failed to include billions of dollars in border security. In a last-minute effort to avoid a shutdown and appease Trump, House Republicans pushed through a new stopgap funding measure that included $5.7 billion for Trump's border wall, according to The Washington Post.

That legislation, however, is not expected to pass the Senate, where Democratic support would be needed to garner the 60 votes necessary for passage. On Friday, Trump urged Senate Republicans to "use the Nuclear Option" to get the bill through, threatening "a shutdown that will last for a very long time" if they didn't.

But several Republican senators opposed the idea of using the so-called nuclear option, in which the majority party changes Senate rules to overcome minority objection by allowing a simple majority of 51 votes instead of the currently required 60. Among them were Senate Finance Committee Chairman Orrin Hatch, Sens. Jeff Flake, Bob Corker, and Health, Education, Labor and Pensions Committee Chairman Lamar Alexander.

On Friday evening, the House of Representatives adjourned without passing a spending bill that can also pass the Senate, making a partial government shutdown a near certainty unless the House reconvenes before midnight. House Majority Leader Kevin McCarthy said that there are no votes scheduled in the House for the weekend, although that could change.

It's unclear exactly how long this partial government shutdown will last, but it's expected to have a limited effect. According to CNN, approximately 75 percent of the federal government has already been funded through September of next year. But among the agencies and departments still left unfunded are the Department of Homeland Security, the State Department, the Justice Department, The Interior Department, and The Department of Housing and Urban Development.

On Friday morning, the president attempted to frame Democrats as the party responsible for the shutdown. "Shutdown today if Democrats do not vote for Border Security!" he tweeted. "The Democrats now own the shutdown!" he later wrote in a separate tweet. Less than a month earlier, Trump said he would be "proud to shut down the government."

"I will be the one to shut it down," Trump told Senate Minority Leader Chuck Schumer and House Minority Leader Nancy Pelosi in an Oval Office meeting on Dec. 11. "I’m not going to blame you for it."

Saturday isn't the first government shutdown to have happened on Trump's watch. Short-lived shutdowns also occurred earlier this year in January and February.

Seth Millstein contributed to this story.