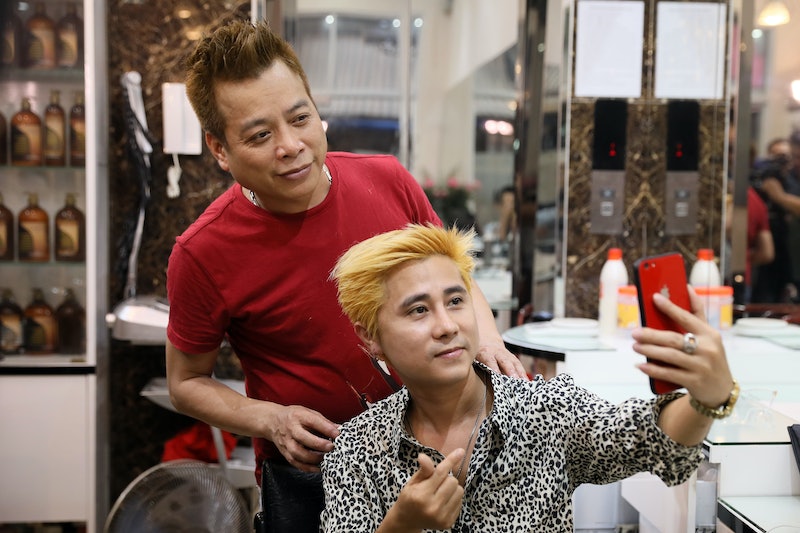 Leaders can inspire, among other things, fashion styles. In a slightly more peculiar instance, a Vietnamese hair stylist has offered free Kim Jong Un and Donald Trump-inspired haircuts days before they gather for a summit in late February in the country's capital, Hanoi. Reuters reported on Tuesday the Vietnamese barber, Le Tuan Duong, was giving locals in Hanoi the two men's signature haircuts, free of charge.

"I was doing this for fun only but was surprised at how people have responded," Duong told Reuters. "I love peace. I hate war so much. So many people in my family have died, so I support this summit very much." According to the news agency, Duong lost two uncles in the Vietnam War.

"Hanoi is a city of peace," Duong went on to tell Reuters. "When Donald Trump and Kim Jong Un decide to come here to talk about restoring peace, I think I should do something to show that Hanoi people welcome the summit."

Reuters reported that Duong made special efforts to trim, crop, gel, and style his clients hair according to the North Korean leader and U.S. president's particular hairstyles. A 9-year-old named To Gia Huy, whom Duong gave a Kim-inspired haircut, told the publication, "I feel happy with this haircut because people will think I look like the leader of North Korea." Here is Huy in his glory.

Another customer, 66-year-old Le Phuc Hai, told Reuters that he was spending some leisure time by a lake near the hair stylist's establishment when Duong asked if he would to have Trump's hair style, including the "orange" dye. "I really like Donald Trump so I want to have [his] hairstyle," Hai told the agency.

After agreeing to undergo a bold change in his appearance, Hai told Reuters, "I’m not afraid of this bright orange hair color because after this promotional campaign, the hair salon owner said he would return my hair to normal."

In a picture taken by photojournalist Hau Dinh, both Huy and Hai appeared to almost cosplay as Kim and Trump, including a solemn a handshake between the two.

The upcoming summit in Hanoi will be the second meeting between Kim and Trump. They met for the first time in Singapore in June 2018. In a joint statement released after the summit, Kim and Trump said that they had "conducted a comprehensive, in-depth, and sincere exchange of opinions on the issues related to the establishment of new US-DPRK relations and the building of a lasting and robust peace regime on the Korean Peninsula."

The North Korean leader and American president vowed that America would "provide security guarantees to the DPRK," while North Korea would commit to the "complete denuclearization of the Korean Peninsula."

If you were wondering whether locals had a preference for Kim's gelled hair or Trump's wispy locks, Duong had an answer for Reuters. It looks like Hanoi prefers the North Korean leader's aesthetic over Trump's.