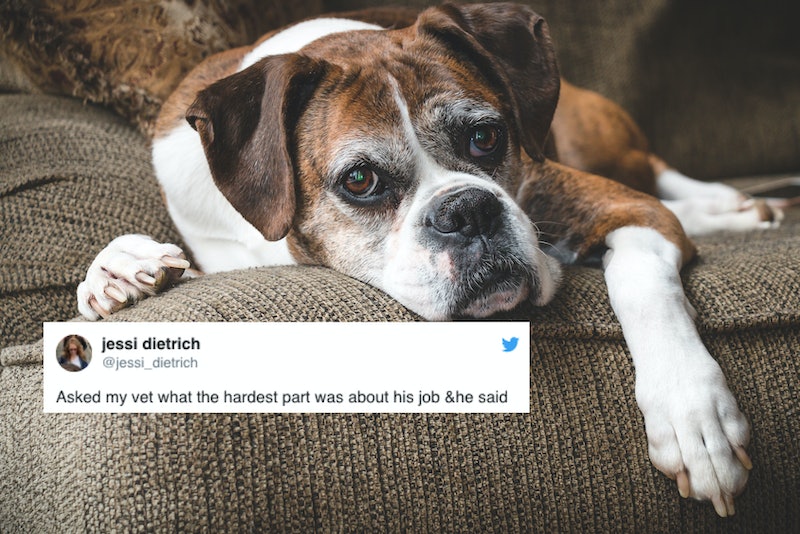 Animal lovers know the lifespans of their non-human kiddos are preciously short. Like a blink-and-you-missed-it moment of bliss that’s over before you know it. It’s no surprise, then, that a viral tweet about having to put pets down broke the entire internet’s collective heart — especially the hearts of every pet owner, like, ever. Twitter user Jessi Dietrich asked her vet what he thought was the hardest part of his job, and her vet’s answer, says BuzzFeed, just about shredded the souls of everyone on the internet.

According to BuzzFeed, Dietrich had to take her two-year-old cat, Rick, to the vet for a near-fatal UTI-blockage. While she was there, she asked her vet the fateful question, and she tweeted the results of the heartbreaking conversation: “Asked my vet what the hardest part was about his job, and he said when he has to put an animal down, 90 percent of owners don't actually want to be in the room when he injects them, so the animal's last moments are usually them frantically looking around for their owners, and tbh that broke me.”

Go give your fur baby pets. Seriously, this can wait.

The reaction from the internet was tremendous, with people posting pictures of their best friends and sharing their experiences of having to say goodbye to their pets.

When it's time for your fur kiddo to cross the rainbow bridge — or wherever you believe they go when they pass on — there are options to make sure their transition is as comfortable as possible. But, first, it's important to understand the euthanasia process, which involves two shots, according to The TODAY Show: a sedative and a drug that stops the heart. "[The sedative] provides for a gentle transition from consciousness to unconsciousness," Dr. Shea Cox, a hospice and palliative care specialist with Bridge Veterinary Services in Northern California, told The TODAY Show. "The only sensation a pet will experience following this injection is falling into a deeper and deeper sleep." Once the family is ready, the vet administers the second injection, which slows the pet's heart until it stops, The TODAY Show reports.

According to WebMD, there are some veterinarians that offer in-home euthanasia services so your pet can pass in the comfort of its own home. "Anecdotally, this is a growing trend, particularly since some pet owners prefer to have their animal pass in a familiar setting, at home, surrounded by members of the family," David Kirkpatrick, a spokesman for the American Veterinary Medical Association, told WebMD. Dr. Cox told The TODAY Show that in-home euthanasia can be one way that you decrease your pet's stress and anxiety during what can be a frightening time for them. "Allowing a pet’s final moments to be spent in their familiar home setting, surrounded by the comforts and smells they have known all their life, is a final gift we can give," Cox told The TODAY Show.

Regardless of where your pet's final day happens, the ASPCA says to minimize your pet's pain or distress by surrounding them with their favorite things, like a blanket or toys. According to The TODAY Show, Dr. Michael Dix of the Jacksonville Veterinary Hospital in Oregon suggests taking this a step further by bringing some special treats. "It is also nice for people to give special things to their pet as the time nears," Dr. Dix told The TODAY Show. "This may be a special treat, like ice cream or hot dogs — not too much, though, as they can get uncomfortable."

The decision for when to say goodbye to your best friend is one the most awful ones you'll ever have to make. But the ASPCA says your vet will be there to advise you on when the right time will be. Until then, just remember you have precious few years with a creature that loves you unconditionally, so try your best to make the most of them.