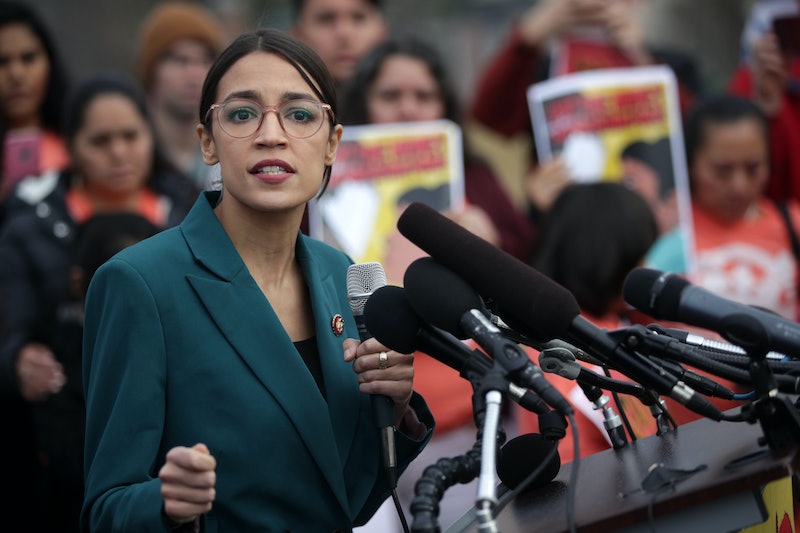 During a hearing about government ethics on Wednesday, one of the freshman members of the House Oversight and Reform Committee broke down the details around "dark money" in political campaigns. Alexandria Ocasio-Cortez's take on campaign finance laws pointed to some alarming truths about how they operate. The issue is pretty complicated, and if you've wondered what all the hype is about, her explanation is pretty informative.

According to RollCall, the hearing was focused on HR 1, a bill that is focused on addressing many of the issues around campaign finances, ethics, lobbying, and voting policies. Per the video below, Ocasio-Cortez started out by saying she wanted to play a "lightning round game," adding, "I'm going to be the bad guy, which I'm sure half the room would agree with."

[Let's say] I want to get away with as much bad things as possible, ideally to enrich myself and advance my interests, even if that means putting my interests ahead of the American people... so if I want to run a campaign that is entirely funded by corporate political action committees, is there anything that legally prevents me from doing that?

Karen Hobert Flynn, the president of Common Cause, a progressive watchdog group, replied, "No."

Ocasio-Cortez was just getting started.

She then said, "If I want to run a campaign that is entirely funded by corporate political action committees, is there anything that legally prevents me from doing that?"

Hobert Flynn again confirmed that there was nothing illegal about that. Ocasio-Cortez clarified, "So there's nothing stopping me from being entirely funded by corporate PACs, say from the fossil fuel industry, the health care industry, big pharma — entirely, 100 percent lobbyist PAC funded."

This was confirmed. Ocasio-Cortez then moved to the next stage of her hypothetical, in which she confirmed that people can "do all sorts of terrible things," and it's "totally legal" for them to pay people off as a result. In this instance, Ocasio-Cortez referenced an op-ed by Bradley Smith, a former chairman of the Federal Election Commission, in which he explained that POTUS' hush-money payments to women prior to the election might have been "unseemly," but were not technically illegal.

Ocasio-Cortez began to tie it all together. "So I used my special interest, dark money-funded campaign to pay off folks that I need to pay off and get elected," she supposed. "Fabulous. Now, is there any hard limit that I have ... in terms of what legislation I'm allowed to touch? ... Especially based on the special interest funds that I accepted to finance my campaign and get me elected in the first place?"

Ocasio-Cortez then delivered the kicker:

The panelists confirmed that neither of those situations were illegal. "We have a system that is fundamentally broken," Ocasio-Cortez said.

Perhaps her scariest point of the entire lesson? That there are more ethics laws and constraints around members of Congress than there are for the president, because Congress has various committees for oversight.

"It's already super legal, as we've seen, for me to be a really bad guy," Ocasio-Cortez concluded. "It's even easier for the president of the United States to be one."