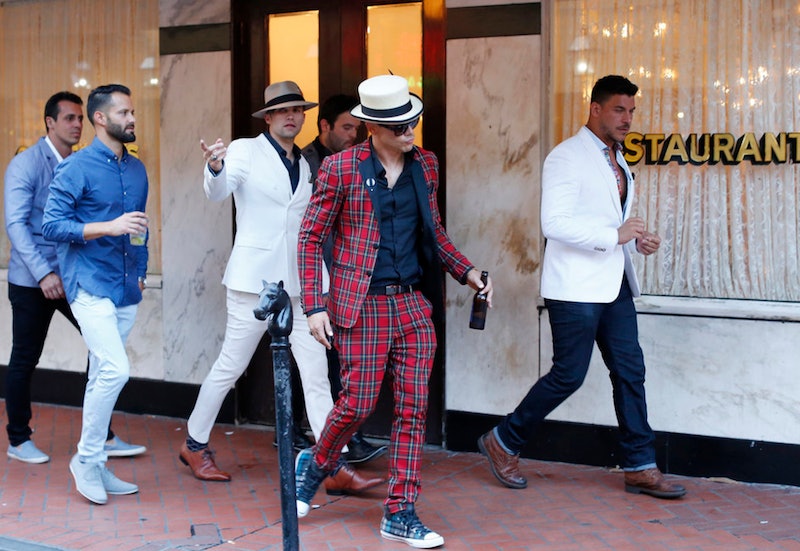 On Monday’s evening’s Watch What Happens Live with Andy Cohen After Show, host Andy Cohen and guest Jax Taylor discussed my favorite Bravo topic of the moment: the Vanderpump Rules Season 5 reunion. Without giving too much away, both revealed that the reunion, which taped on Feb. 24, spun out of control toward the end of the shoot. And apparently, things even got to be too much for the king of Bravo.

Cohen and Taylor said they were “surprised” at how things played out, the latter adding he was “in hysterics half the time.” And then, the host said something that will bounce around in my head until I get to put the reunion in my eyes:

"The last 20 minutes was actually probably [in the] top five [of the most] uncomfortable things that I've ever been around.”

Taylor chimed in, "During the break, I even went to production and was like, ‘This should not be happening.’”

I don't have the answer, but I do have some guesses.

After several dramatic hours of filming the Vanderpump Rules Season 5 reunion, the room’s air conditioning unit could decide it's had enough shrill accusations for the day. With a loud pop, the A/C could come to a screeching halt. Within a matter of minutes, the room may go from a comfortable 70 degrees to a sweltering 90.

The air could become thick, the hot production lights could beat down on the cast and crew. Makeup could begin to run, underarms could begin to perspire. The Pumpers might look like marzipan figurines that were left out in the sun too long. Once the heat gets to be too much, Cohen may decide to call it a day.

Guess #2: Lala Shows Up At The Last Minute In A Private Plane

Just as the reunion starts to wind down, the Pump Rules cast could hear a whirring overhead. And then, there could be a loud, wall-rumbling thud on the roof. A producer might scramble out of the venue to go check what caused the noise. Over the headset, the producer might tell the rest of the crew that everyone needs to head to the roof.

Once the cast and crew go outside, they may see a private jet parked on the roof of the bar. And then, they might see Lala walking down a flight of airstairs.

Everyone would be rendered speechless. For 15 minutes, the Pump Rules cast might stand in dumfounded silence. Once the silence gets to be too awkward, Cohen may decide to call it a day.

In the final 20 minutes of the reunion, Cohen could arrive at an earth-shattering conclusion: Pump Rules is actually just one of Giggy the Pom's recurring dreams. Ken and Lisa's dog sleeps so much, not because he's perpetually exhausted, but maybe because he wants to keep the Pump Rules world spinning. Once the metaphysics get to be too much, Cohen may decide to call it a day.

And what do you know? The guesses got to be too much... I'm going to call it a day.