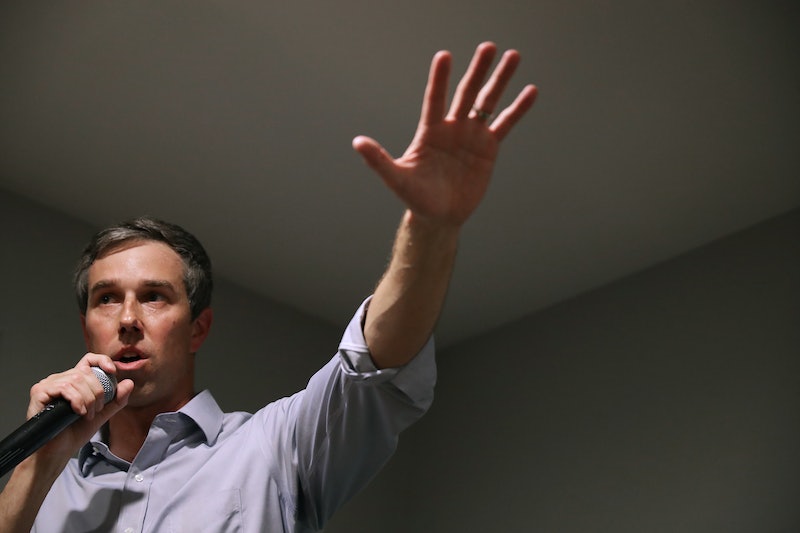 To some, his response may sound a tad noncommittal. In Iowa on Monday, a voter asked Beto O'Rourke if his running mate would be a woman. The Democrat, who announced his bid for the 2020 race in mid-March, said, "It's hard for me to think of a reason that I would not do that. I think talking about who I would pick as vice president feels really premature."

The Hill tweeted a clip of the exchange, which you can watch below. The voter, a man who has not been identified, pressed O'Rourke on his response. "I know it feels premature," the man said. "But you're half of a ticket when you're becoming a president. You represent the other half of this country, too. They need to see a woman in a position of power in this country."

"We haven't had a woman vice president," the man went on to tell O'Rourke. "I would like the youngest person that I'm going to vote for, to drive this country forward and put a woman on his ticket."

O'Rourke told the man that although he agreed with and appreciated his sentiment, he said that he felt that it would be "very presumptuous" to talk about his future running mate.

O'Rourke's noncommittal response may leave a lot to be desired among some critics, especially given his lack of positions on other issues. It also stands in contrast with other 2020 male contenders, who have given somewhat more definitive answers on the subject of picking a woman as their running mate.

Vermont Sen. Bernie Sanders, for example, spoke about his potential pick for a running mate in an interview with The Young Turks web-series in February. "I think we would look for somebody who is maybe not of the same gender as I am," Sanders said that month.

In February, Sanders also told the Vermont Public Radio about his presidential bid and what his message for the country was. According to Sanders, his plan is to "take the values that all of us in Vermont are proud of — a belief in justice, in community, in grassroots politics, in town meetings — that's what I'm going to carry all over this country."

"I believe there should be a woman president right now and we’ve worked very hard to get one, but we have such a great field of leaders," Booker said in that interview. "I’m not going to box myself in, but should I become it, you know I’ll be looking to women first."

While campaigning in Iowa, O'Rourke has attempted to create a bipartisan image among voters. According to USA Today, O'Rourke told the press, "We have to make sure that everyone’s voice is included, regardless of the differences."

"Those are unimportant in the face of the challenges that we have right now," O'Rourke added, per USA Today. "So if that doesn’t put me somewhere convenient on the political spectrum, so be it. That can’t be what this is about."