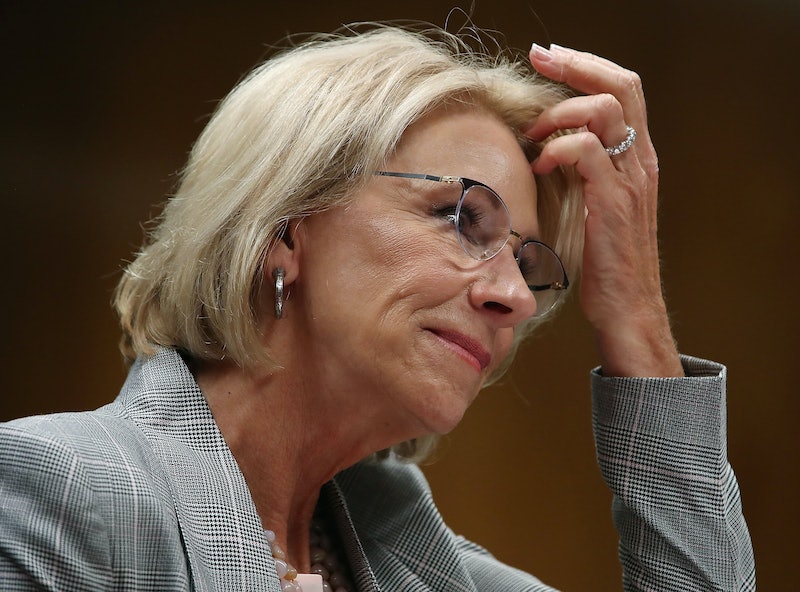 Trump's Education Secretary isn't a fan of the spotlight that comes with public office — she made that abundantly clear at a recent conference in Baltimore. During a speech at the National Education Writers Association conference, Betsy DeVos explained she doesn't like the media coverage that comes with her job. What's more, she claimed that "many in the media" use her name as clickbait.

I don’t enjoy the publicity that comes with my position. I don’t love being up on stage or on any kind of platform. I’m an introvert ... As much as many in the media use my name as clickbait or try to make it all about me, it’s not.

According to The Detroit Free Press, DeVos also explained her political philosophy at one point, saying, "It should surprise no one that I am a commonsense conservative with a healthy distrust of centralized government. Instead, I trust the American people to live their own lives and to decide their own destinies. That’s a freedom philosophy."

This isn't the first time DeVos has expressed her displeasure with the media's treatment of her role as education secretary. Last March, she was criticized heavily for the interview she gave on CBS' 60 Minutes.

In the interview, DeVos said at one point that she hadn't "intentionally" visited any underperforming schools, and that "billions" of dollars had been wasted in the public education system, a number that she did not explain further. The reaction to the interview was swift, with CNN labeling it a "trainwreck" and The Atlantic labeling it a "botched" interview.

Following the backlash to the interview, DeVos released a pair of tweets where she accused 60 Minutes of not sharing the information she allegedly shared with them. She wrote in part,

Here’s what we shared with @60Minutes, which of course they didn’t show you: Michigan, like much of the nation, isn’t doing well enough to prepare students. Scores are stagnant. Students need more options, and we must rethink our approach to education.

She also released another tweet with information "missing" from 60 Minutes pertaining to the success of charter schools in Detroit. She didn't explain why she believed that information validated many of the interview answers she gave.

Though DeVos has been one of the more controversial members of Trump's cabinet, some of her supporters argue that the criticism around her has little to do with how effectively she does her job. Per The Associated Press, Sen. Lamar Alexander, chairman of the Senate Health, Education, Labor and Pensions Committee, said of DeVos, "Just because she’s been a lightning rod and been engaged in controversy doesn’t mean she’s not doing her job. She’s come and she has stayed, which is more than you can say about some others in the Cabinet.”

During her speech in Baltimore, DeVos made it clear that she doesn't believe there should be a focus on her. Per The Detroit Free Press, she asserted, "Education is not about Betsy DeVos nor any other individual."