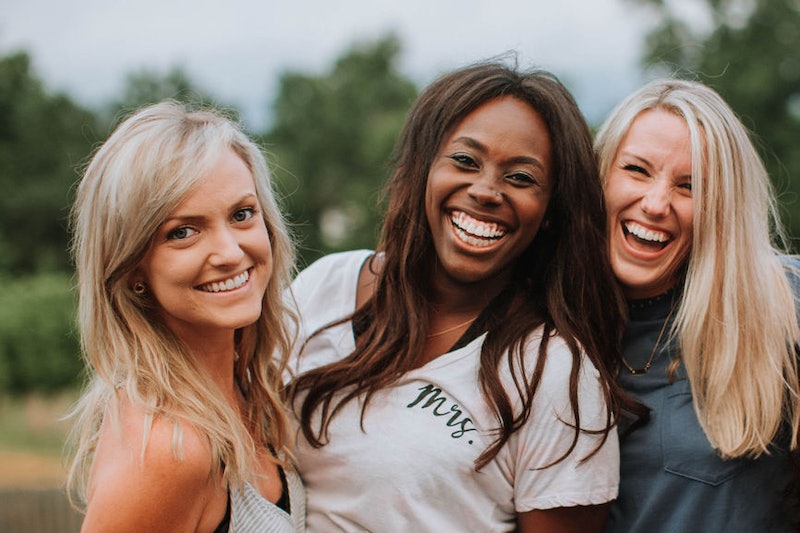 What is your BFF to you? I imagine they are your absolute world. Your ride or die. The person you wish you could have with you all the time. It is fair to say that people kind of obsess over their BFF. And like, fair enough, you really can't buy that kind of true love and friendship. Or can you? Well according to some recent research it looks like the average Brit would ditch their BFF for a cash sum of £131,000. I know right? I'm both appalled and also absolutely considering it.

Now before you think it's socially acceptable to chuck your bestie on eBay, it might be worth hearing about the study.

The new research released today by Foxy Bingo found some pretty shocking stats. The study (of 2,000 respondents) found that up to four in 10 disloyal pals would agree to ditch their BFF if enough dough was put on the table. Yep, they'd kick them to the kerb for all of eternity and count those dollar bills.

The results also found that, when the genders are split, women would get rid of their mates for less on average than men. OMG what happened to girl code y'all? Yes, gal pals are willing to dump their mates for just £106,000 versus lads, at £180,000. So much for flipping female solidarity am I right?

It seems to be an even more of a sad situation if you're living in Liverpool, where the average female says she would drop her one and only like a flipping hot potato. For £62,000. OMG guys?

OK, so which city am I most likely to find a friend who won't flog me at the first opportunity? Seemingly Glasgow is where it's at. You would need to spend a hefty £200,000 to get someone's BFF off them.

OK, I know I'm laying the judgement on thich but, let's be real, depending on what end of the month it is, I would potentially drop my BFF for the cost of a Tesco meal deal. Thing is though, this study got into some more low key effed up stuff. Revealing some people to be little scoundrels.

A pretty shocking seven percent of those surveyed admitted they have low key flirted with their BFF's bae. Even worse, six percent admit to having snogged said bae. Christ alive, is anything sacred anymore?!

The survey however did throw up some super cute figures that definitely made this little heart melt. Over a quarter of those surveyed say that no matter how long it's been since they saw their BFF — the second they see one another, it's like no time has passed at all. That my friends, is a true BFF.

Kim Mills, the manager of sponsorships and partnerships at Foxy Bingo, and the person who commissioned this eye-opening poll, said there are definitely pros and cons to the results found. In a statement sent to Bustle UK, Mills said:

"This study is a fascinating look into the nature of friendship. Although some people would sell their best friend down the river for some cash, it’s reassuring to see that most Brits value friendship and are loyal to their pals. At Foxy Bingo, we really rate friendships and love to see them blossom in our vibrant online community."