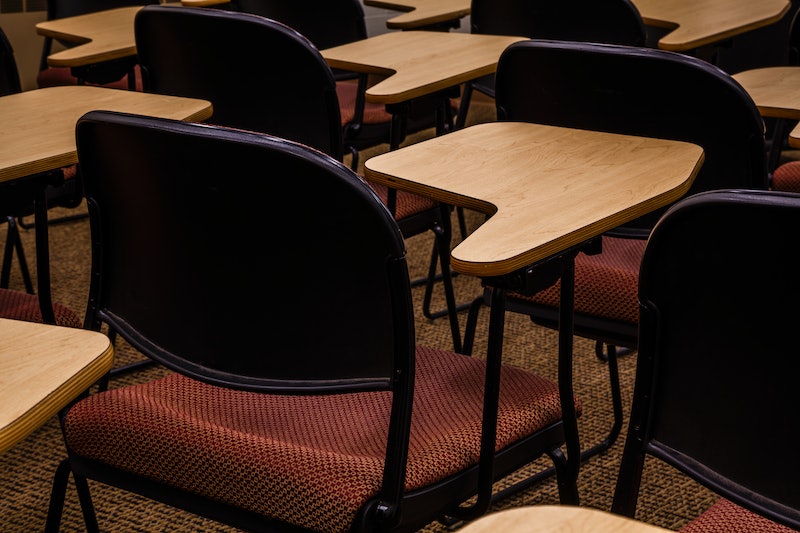 When Abby McElroy was 15, guest speakers came to her high school sexual education class to talk about healthy relationships and sexual activity. McElroy, now 18, tells Bustle she was excited at first, but then noticed some red flags. McElroy says the speakers drew a mountain on the whiteboard, and two people holding hands were sitting in a trolley cart at the top of the mountain. They said the mountain represented different steps of physical affection — the "steep slope of arousal." After kissing, you drop off the mountain's clifftop and fall down onto rocks. "They told us that the rocks at the bottom were the negative effects of sex, which were STDs, unplanned pregnancy, and emotional baggage," McElroy says.

The speakers were from Amnion Pregnancy Center, a crisis pregnancy center in Drexel Hill, Pennsylvania. Crisis pregnancy centers are often discussed in the context of abortion rights; many are next door to or near abortion-providing clinics but use deceptive tactics to dissuade patients from having an abortion. In many states, they are also contracted by schools to teach sex ed, despite the fact that their curricula often rely on misinformation like the "slope of arousal." (Bustle reached out to Amnion Pregnancy Center for comment, and we will update this piece when we hear back.)

Jennifer Driver, vice president of policy and strategic partnerships at the sex ed advocacy organization Sexuality Information and Education Council of the United States (SIECUS), tells Bustle that crisis pregnancy centers are often allowed into schools when states have a loose definition of "medically accurate" sex ed, or when they don't have a definition at all.

Schools also often may not know an organization is a crisis pregnancy center before they invite it into sex ed classes. That was the case in McElroy's school district: After an investigation, her school board banned Amnion from teaching in her school district. Amnion's executive director, Melanie Parks, defended the program in an August 2018 email to the Philadelphia Inquirer: "The RealEd program is secular, factual, and provides the relationship education component of the overall sexual education curriculum and has consistently received positive feedback through student and teacher surveys," she said. "We hope that Wallingford-Swarthmore continues to offer relationship education programming for their students."

Unfortunately, it's difficult to track where crisis pregnancy centers are teaching sex ed, as McElroy's experience shows. This list of 2019 Sexual Risk Avoidance Education (SRAE) Grantees includes religious and sex education organizations in 14 states that receive federal money for abstinence-only sex ed. If you want to find out whether crisis pregnancy centers are teaching in your area, Driver recommends first doing a little bit of research online.

"When your school district is really strapped for cash and crisis pregnancy centers are offering free to reduced-cost services, then it looks really appealing."

"The first thing that folks should figure out is [if there's] a state mandate for sex education that dictates the type of sex education required to be taught to young people," she says. "Does your community provide sex education courses based off a particular curriculum? And if so, what does that cover and what does it leave out?" Crisis pregnancy center curricula are often vague, use scare tactics, are partially or entirely medically inaccurate, stress abstinence only, and omit information about LGBTQ identities.

If you want to make sure that sex education in your area teaches medically accurate information, SIECUS has a Community Action Toolkit you can use. If you're a parent or work with young people, Driver says talking with them about what's being taught in their school can also help keep you up to date. "Get to know your school board," she says. "It's important that you're engaging school board members, educating them about crisis pregnancy centers and the harm that they're causing young people," because they're the ones making lower-level decisions.

"Most of them don't even realize that it's happening," Driver says. "So just a couple of calls, a few letters, emails can make a really huge difference."

More like this
24 History-Making Black Women You Probably Didn't Learn About In School
By Ayana Lage and JR Thorpe
25 Inspiring Quotes From Black Women To Celebrate Black History Month
By Kyli Rodriguez-Cayro and JR Thorpe
Twitter Is Identifying With Sally Field & Jane Fonda’s Friendship In New Viral Video
By Jake Viswanath
10 Primal Movement Exercises That'll Improve Your Mobility
By Carolyn Steber
Get Even More From Bustle — Sign Up For The Newsletter
From hair trends to relationship advice, our daily newsletter has everything you need to sound like a person who’s on TikTok, even if you aren’t.