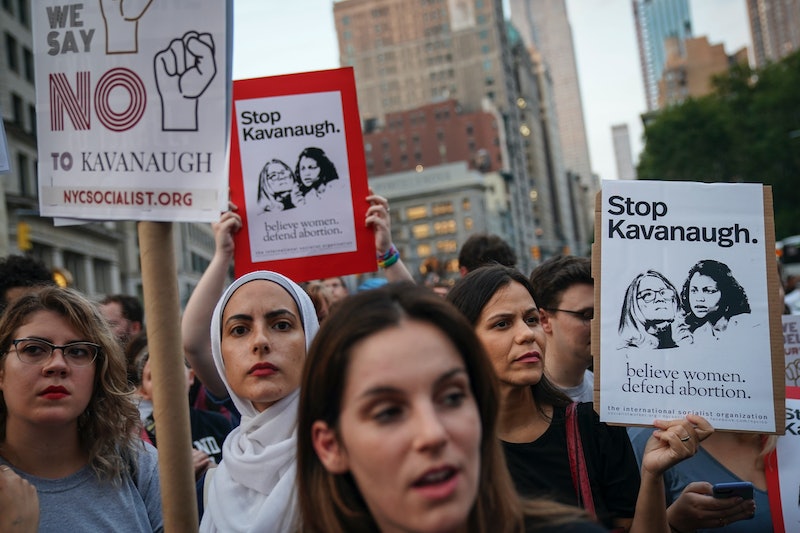 Brett Kavanaugh's contentious nomination has resurfaced discussions about whether the Supreme Court's lifetime appointment rule should be changed. President Donald Trump said earlier this year that he wants to appoint a justice who will serve for over four decades, but the rest of the world seems to think that such a lengthy tenure is unacceptable: The United States is the only country to lack term limits in its highest court, per Vox. For many, it's time to talk about whether the U.S. system is working the way it was intended.

The Supreme Court's lifetime appointment rule can absolutely be changed, though not everyone agrees about how. According to NPR, some lawyers believe that Congress has the authority to pass a simple law to make the adjustment. But most legal experts are convinced that it has to be done through a constitutional amendment, which would need to pass Congress and then get approved by 75 percent of the states. Alternatively, states could independently call a Constitutional Convention and pass an amendment there.

There could, however, be a third way. Attorney Robert F. Bauer has suggested that the U.S. develop term limits that are enforced by norms, not enshrined by law. In 2005, he suggested in a Washington Post piece that the president could decide not to appoint anybody to the court unless they agreed to serve for a limited time; "over time, a custom or expectation would develop," he wrote. Political norms can often be powerful, though they are of course far from sacrosanct.

The lifetime appointment was originally intended to make the court immune to partisan influence. If justices don't have to worry about reappointment, the argument goes, they'll be free to rule objectively. "That was put into the Constitution to preserve the total independence of the judiciary," Northeastern law professor Michael Meltsner told Molly Callahan for the school's publication. "Once a justice is confirmed and takes a seat on the court, they're not beholden to anybody."

There's reason to think the court has recently been more susceptible to political agendas than it was when it began. The makeup of the court is now considered to be so intrinsically tied to politics that confirmation votes are overwhelmingly partisan where they once weren't, per PBS (conservative Antonin Scalia was confirmed unanimously in 1986).

The New York Times pointed out earlier this year that lifespans have increased dramatically since the writing of the Constitution and medical advances have caused people's health to decline more slowly, which allows them to better predict when they'll no longer be fit to serve on the court. Per the Times, most judicial tenures until the 20th century ended in death, but now justices can carefully plan to leave under a president who will usher in a replacement who they'd approve.

On the other hand, some argue that judges shouldn't be isolated from politics because they should be responsive to changing societal norms. The Times reports that the average length of tenure of a Supreme Court justice was 16 years after the Civil War but has increased to around 26 in recent years. Is it possible that the court would have legalized gay marriage earlier if its justices were appointed during a more recent and more tolerant era, for example? Who knows. It's certainly true that public opinion shifted in favor of gay marriage several years before the court caught up and legalized it in 2015. (Of course, timing also depends on when appropriate cases reach the Supreme Court.)

"There's definitely concern about the justices being out of touch," Gabe Roth of Fix the Court told NPR. "There have been a number of cases with modern technology, whether it be smartphones or bulk data collection or different types of ways of getting TV over the airwaves or over the internet."

Some people are also concerned that justices become less fit to serve as they reach old age. "The history of the court is replete with repeated instances of justices casting decisive votes or otherwise participating actively in the court's work when their colleagues and/or families had serious doubts about their mental capacities," law professor David J. Garrow wrote in 2016.

Most Americans are in favor of getting rid of the Supreme Court's lifetime appointments. A recent poll from Ipsos and the Center for Politics found that 70 percent of citizens are either "strongly" or "somewhat" in favor of term limits, as opposed to 17 percent that "strongly" or "somewhat" don't want them. It's completely possible to end the practice. You may just have to wait until the opinion within Congress catches up to that of the public.