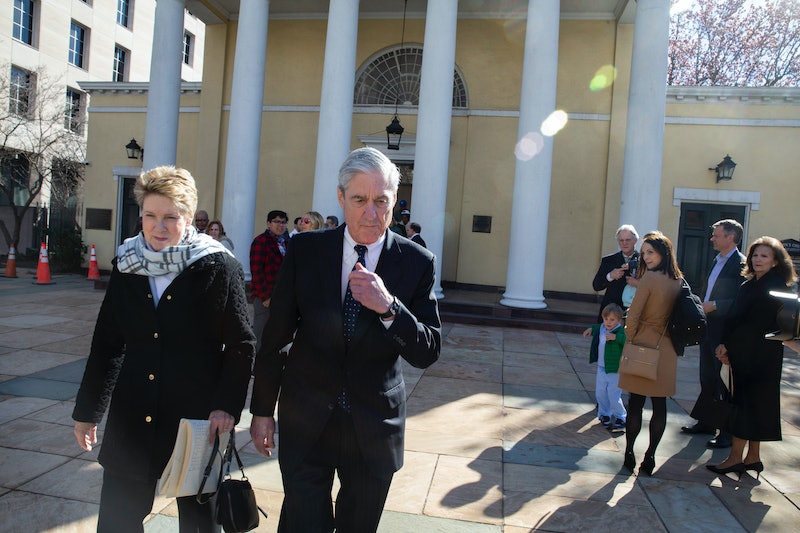 On Sunday, President Trump tweeted that Special Counsel Robert Mueller should not testify before Congress about his recently concluded investigation. But just because Trump doesn't want Mueller to testify doesn't necessarily mean the president can stop him, two constitutional law experts tell Bustle. Although there isn't a hard and fast answer to whether or not Trump can stop Mueller from testifying once the special counsel leaves his post, both experts agree that any effort to do so would probably devolve into a legal battle.

Last week, President Trump said that he would let Attorney General Bill Barr decide whether or not Mueller should testify before Congress, CNN reports. But in an apparent about face on Sunday, Trump changed his mind.

"Bob Mueller should not testify," Trump tweeted. "No redos for the Dems!"

Mueller's investigation sought to answer whether or not the 2016 Trump campaign colluded with Russia to influence the election, and also explored potential obstruction of justice issues. The investigation ultimately concluded that there was no collusion, but left obstruction of justice questions unanswered, according to Mueller's report. President Trump was not charged with any crimes.

Philippa Strum, a constitutional law expert and global fellow at the Woodrow Wilson International Center for Scholars, tells Bustle she believes that if President Trump were to try preventing Mueller from testifying before Congress, it "would not work."

"What he could do at most is slow down the process," Strum says. "But ultimately Mueller will certainly testify."

While Mueller is still the special counsel, he technically works as a federal employee under the executive branch, Strum explains. "As a member of the executive branch, the President could order him not to speak," she says. But, she explains, if Trump were to do that, "a court case would ensue."

Eric Segall, a law professor at Georgia State University, largely agrees. "The Attorney General could direct [Mueller] not to go, then Congress would go to court," Segall says.

But, Strum and Segall say, either way, Mueller won't be the special counsel forever. Someday, probably soon, they say, he will revert to being a private citizen.

"And at that point ... nobody can stop him from testifying," Strum says. "He has the same right to freedom of speech as other private citizens, under the First Amendment."

Segall underscores that there is no definitive answer for how such a situation would play out. It's possible, he says, that even as a private citizen, Mueller could be ordered not to testify about classified information while speaking before Congress — in which case his testimony could bear resemblance to former FBI director James Comey's 2017 congressional hearing. But, Segall says, it's unlikely that Trump or his administration could stop Mueller from going before the legislature all together.

"Any citizen can be stopped from disclosing classified information," Segall explains. "Other than that, I think, unless [the Trump administration asserts] executive privilege, I don't think the executive branch can stop a private citizen from testifying before Congress."

But executive privilege is a murky legal area, NPR reports. The concept, the outlet explains, stems from presidents arguing that in order to receive "candid advice" from their aides, those aides need certain legal protections. Those legal protections, NPR explains, can sometimes come by way of withholding certain information from Congress, and by extension, from the public. But once a president claims executive privilege, the battle is far from over, Strum says.

"Whether or not the president has claimed executive privilege legitimately then becomes a matter for the court," she says.

Strum adds that it's possible Trump might try to claim executive privilege over some matters related to the Mueller investigation, but says those efforts would be "dubious."

In the end, Strum explains, when it comes to interviewing people like Mueller, Congress is likely just trying to do its job. "It's not a matter of witch hunts," she says. "It's not a matter of punishing anybody. The reason for the congressional power is to get the information that the people's representatives need to serve the people who elected them."