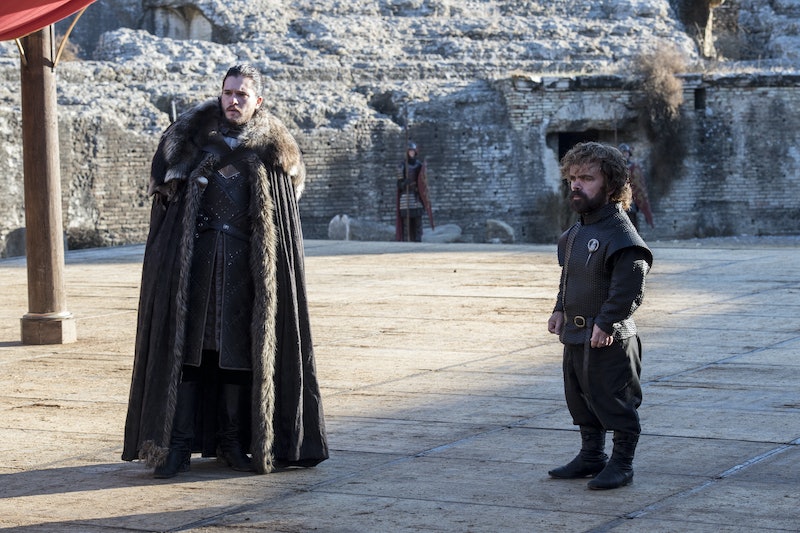 Sansa warned Jon Snow about Cersei, but even she couldn't fully prepare him for the epic face-off. That's not just because he wasn't listening to Lady Stark, either. Jon Snow met Cersei on Game of Thrones, and his regal position was truly put to the test.

This wasn't quite like the diplomatic audience that Jon had with Daenerys earlier in the season. For one thing, those two had the hots for each other. Jon Snow may appeal to a lot of women on Game of Thrones, but he is certainly not Cersei Lannister's type. In addition, Daenerys is just as new to Westerosi politics as he is. Cersei has been in King's Landing for the better half of her life. She has more experience ruling and negotiating than almost any other character.

"This isn't about living in harmony," Jon said, entering the conversation with eloquence. "It's about living." He kept quiet at first, which was a good move. The King In The North started out so strong, He did an impressive scientific demonstration of how to destroy wights. Cersei noted that, as Ned Stark's son, he would be true to his word.

Then she asked for his loyalty, and Jon had to nobly admit that he had already pledged to Daenerys Targaryen and could not serve two queens. Cersei left, and Tyrion had to go and pick up the pieces.

Jon Snow has been thrust into power multiple times, but commanding the wildlings, the Night Watch, and even the Northern Lords doesn't hold a candle to the highborn society of King's Landing. In a way, it's refreshing that he's clearly over duplicity and politics. Unfortunately, he's still putting himself and the country in danger.