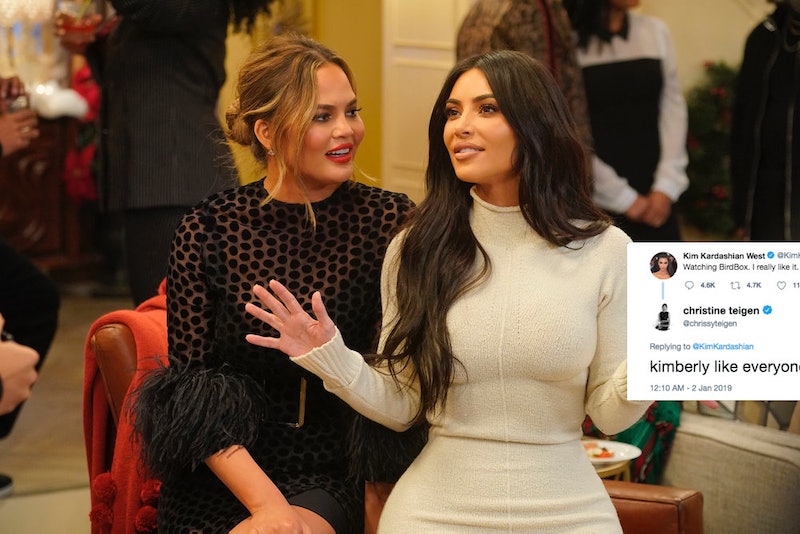 Although she's a trendsetter, even Kim Kardashian can fall behind on what's been happening in pop culture. And that's exactly what happened on Jan. 1 when Kardashian tweeted she was watching Bird Box and innocently asked who else had seen it. Not one to let a good social media moment pass her by, Chrissy Teigen poked fun at Kardashian's Bird Box tweet, since the Netflix movie has been the teensiest bit of a cultural sensation. Considering Kardashian was featured in some of the best Bird Box memes, it was her destiny to watch the Sandra Bullock film. But it seems that just like Malorie, Boy, and Girl, Kardashian got swept up in the fast-moving waters of entertainment and is only now jumping on the Bird Box boat.

The post-apocalyptic Bird Box hit Netflix on Dec. 21 and with the Christmas holiday and the year-end, it would've made sense if people were too busy to sit down for a two-hour streaming movie. Yet, Netflix reported that Bird Box broke a viewing record with more than 45 million accounts watching the movie in its first week. So people had some things to say when Kardashian tweeted about it a whole 10 days later. "Watching BirdBox. I really like it. Who has seen it?," Kardashian said. Teigen replied to her bud simply and succinctly with what most people were thinking by tweeting, "Kimberly like everyone in the entire world."

In her defense, Kardashian did host an extravagant Christmas Eve party (that Teigen's husband John Legend performed at), so maybe she had chosen to wait to watch the emotionally draining Bird Box until the New Year. But what's more befuddling is Kardashian's seeming ignorance about the fact that the movie is massively popular. Sure, she could have just been trying to engage her fans (and engage she did). But her slightly oblivious question has people either rolling their eyes or gently ribbing the reality star à la Teigen — and it's glorious.

The predominant response to Kardashian's question was something along the lines of: Pretty much everybody has watched it, duh. So it's not like Teigen was revolutionary in her response. (Even David Alan Grier took a moment to inform Kardashian that everybody has seen it.) But that's one of the very reasons why Teigen's tweet is so perfect. She is saying what the masses are thinking without being too insulting to her friend.

Another reason it's pretty hilarious that Kardashian so naively asked, "Who has seen it?" is because of the sheer number of Bird Box memes that have taken over the internet. Clearly, Kardashian peruses social media from time to time, so it would be rather astounding if she hadn't seen some Bird Box memes. Not to mention that Kardashian herself was even featured in some of the more popular ones.

While she didn't get to Bird Box until 2019, Kardashian has been digging watching movies on Netflix recently. After struggling with some technical difficulties, she posted how she watched Black Mirror: Bandersnatch on Dec. 29 and that it was "so fun." (Perhaps that wouldn't be everyone's choice of words considering the dark subject matter, but to each their own.)

Meanwhile, Teigen watched Bird Box (and tweeted about it) a whole five days before Kardashian. But, as both Kardashian and Teigen are well aware of, a lot can change in pop culture over the course of a few days. So even if she was a little behind schedule, at least Kardashian is up on the Bird Box phenomenon now — and she has millions of people to discuss it with.