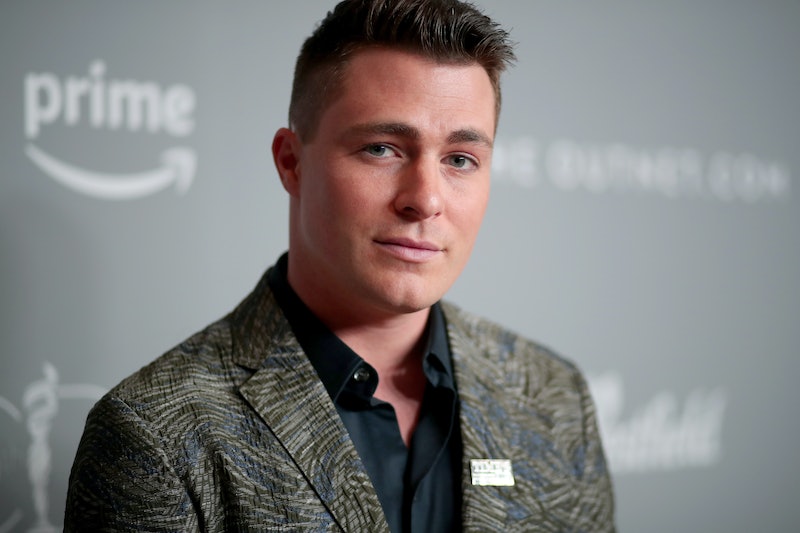 Former Arrow and Teen Wolf star Colton Haynes has done his fair share of coming out in the last few years. From publicly coming out as gay in 2016 to opening up about his treatment for drug and alcohol use earlier this year, Haynes has been looking to “let y’all in on my truth,” as he said in a new Instagram post. Haynes posted a photo of himself taken last year, during a period of hospitalization for drug and alcohol use, PEOPLE reported, saying that he's glad that his openness on these subjects can help others.

“I no longer want to project a curated life,” Haynes wrote on his Instagram. “I get immense joy when someone comes up to me & says that my willingness to open up about depression, anxiety, alcoholism, & addiction has helped them in some way.”

As he explained to Attitude Magazine in March, coming out publicly had actually worsened his already-existing anxiety and drug use. The added scrutiny and attention from the public clashed with feeling “extremely free,” he told Attitude. And now, he’s taken a further leap in sharing the fallout from his divorce and the death of his mother in 2018 by publicly releasing these photos. Haynes posted the pictures he did because he wanted his followers to know that “I have far more important things to say than what magazine I just shot for or what TV show I’m a part of.”

Gesturing to the pressures of social media to craft a public image of ease, success, and sex appeal, Haynes wrote that “Worrying about what time to post on social media so I can maximize my likes or being mad at myself that I don’t look the same way I did when I was addicted to pills is a complete waste of why I was put on this earth.” This pressure to maximize likes and curate a particular social media image is particularly strong on Instagram, and particularly destructive to people’s mental health, according to a 2017 study published in the Royal Society for Public Health journal.

The study noted that a very strong "compare and despair" attitude emerges on social media, especially for Instagram users. The idea is that Person A curates their experience to look like the perfect vacation, so Person B assumes that the curated experience is a wholly accurate representation of Person A's life. That comparison and subsequent despair that your life doesn't measure up is especially strong on Instagram and SnapChat, which are "very image-focused and it appears they may be driving feelings of inadequacy and anxiety in young people," according to a press release that accompanied the study's release.

Another 2017 study, published in the journal Cyberpsychology, Behavior, and Social Networking, concluded that feelings of the self-worth of Instagram users has come to rely very heavily on external validation from followers. And regarding alcohol and substance use, a 2018 study published in the same journal found that posts about alcohol on social media tend to be positive in nature, "potentially leading to an underestimation of alcohol-related risks," according to study authors.

This is one of the reasons that Haynes' raw slideshow from his hospitalization after extreme alcohol and drug use is a rarity on social media. Curating an effortless image of your life often only includes positive "after" photos rather than actual "rock bottom" photos, and this is precisely what Haynes was looking to change.

"I’ve struggled the past year with trying to find my voice and where I fit in," he wrote. "And that has been the most beautiful struggle I’ve ever had to go through." In addition to being open about sharing his own truth, he wanted to make sure followers knew that they weren't alone, too: "If ur in the middle of the dark times," he said, "I promise you it doesn’t have to last forever."

This is an important promise coming from a social media platform that so often promises beautiful vacations and hastag-able moments, if only you were a little better than you are. There is no better, Haynes suggested, only where you are now. And where you are now is not alone.