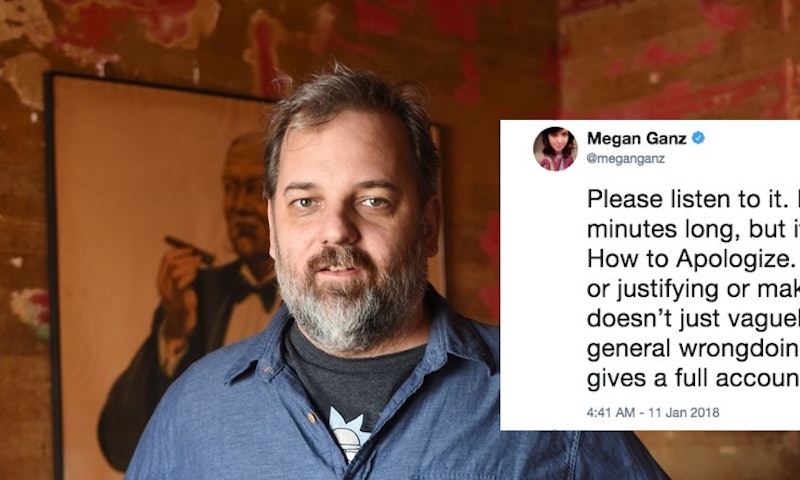 Last week, TV comedy writer Megan Ganz called out Community creator Dan Harmon, who's her former boss, for alleged sexual harassment in a Twitter exchange that has since made headlines. Now, some eight days later, the former Community writer has once again taken to Twitter to address the situation. Only this time, Ganz responded to Harmon's long-winded apology, which was broadcast during the latest episode of his weekly podcast, Harmontown. And in an 180-degree turn of events, Ganz called Harmon's regretful mea culpa "a masterclass in How to Apologize."

The critical tenets of such a "masterclass," as Ganz explained on Twitter, are as follows: no rationalizing, no justifying, and no making excuses. Instead of vaguely acknowledging an amorphous, nonspecific wrongdoing, take full responsibility for what you did and who you hurt. It seems other men in Hollywood may actually want to take a note from Harmon's apology, as far as learning how to own up to their own inappropriate behavior — and actually own it, instead of deflecting blame or trying to shove it back under the rug.

During a viral string of tweets on Jan. 2, Ganz finally addressed her long-hidden gripes with Harmon, the Community EP, who she claimed had not only allegedly sexually harassed her, but also gone on to publicly denounce others' harmful behavior without ever having taken responsibility for his own. Ganz wrote,

"It took me years to believe in my talents again, to trust a boss when he complimented me and not cringe when he asked for my number. I was afraid to be enthusiastic, knowing it might be turned against me later."

For those who didn't catch Ganz and Harmon's back-and-forth on Twitter, or are otherwise unfamiliar with the former colleagues' tension-ridden history over the last several years — let's rewind. On New Year's Eve, Harmon tweeted out a message to his some half-million followers, conceivably attempting to reference a "serious" issue in a not-so-serious way. (The issue being, presumably, the overwhelming amount of powerful men, whose alleged inappropriate behavior has come to light in the government and entertainment industry alike). Harmon tweeted,

Ganz, who has openly decried Harmon on social media at least once before (most notably, for his grisly comments on Season 4 of Community, which, probably un-coincidentally, was the first season to air after Sony reportedly fired Harmon from his own show), immediately smelled hypocrisy. And she took the opportunity to remind Harmon that he should probably deal with his own alleged indiscretions before so assuredly pointing out the indiscretions of others. "Care to be more specific? Redemption follows allocution," Ganz cracked, kicking off the Twitter exchange.

When Harmon ultimately responded to Ganz's Twitter call-out with an admission of guilt ("I'm filled with regret and a lot of foggy memories about abusing my position, treating you like garbage"), as well as a request to make amends ("I would feel a lot of relief if you told me there was a way to fix it"), Ganz summoned him to a sort of challenge: "You want relief? So do I," she wrote. "Figure out how to give me that relief and I’ll return the favor."

And, judging by Ganz's latest string of Twitter commentary regarding her former boss, it seems Harmon rose to the occasion. On Thursday, Jan. 11, Ganz penned a markedly lighter-toned message to her Twitter followers, which read:

"Here's a weird one for you: Last week, I called out my former boss @danharmon for sexual harassment, and today I'm going to ask you to listen to his podcast."

During the latest episode of his weekly comedy podcast, Harmontown, Harmon delivered a seven-minute apology in which he not only walked listeners through the details of his sexist mistreatment of Ganz (which, essentially boils down to unsolicited, unprofessional come-ons in the workplace), but also took ownership of this behavior and offered an important message to all the men out there who may let themselves off the hook about potential instances of sexual harassment, simply by "not thinking about it." (Most women would probably just call this "male privilege.")

"So I just wanna say, in addition to obviously being sorry — but that’s really not the important thing — I wanna say I did it by not thinking about it," Harmon said, "and I got away with it by not thinking about it." His apology continued on to say that, if Ganz hadn't called him on those past behaviors, he probably would've continued to not think about it. During the final leg of his apology message, Harmon implored male listeners to do the opposite — to "just think about it." He said,

And I think that we're living in a good time right now, because we're not gonna get away with it anymore. And if we can make it a normal part of our culture that we think about it and possibly talk about it, then maybe we can get to a better place where that stuff doesn't happen."

Harmon finished the message with an earnest request: "Please don't hurt [Ganz]. Please don't make this worse on anybody but me, and let's move on."

If Ganz's tweets following Harmon's apology are any indication, it seems that perhaps both parties have managed to find the relief they were looking for —Ganz's, in Harmon finally acknowledging his past behavior; and Harmon's, in gaining forgiveness. In the final post of Ganz's latest tweet series, she publicly forgave Harmon.

So, to all the men out there who've spent most of their lives feigning acknowledgement, dodging accountability, or otherwise managing to entirely neglect their wrongdoings: Take note. It should hopefully go without saying that the garden variety cop-out "apology" is particularly egregious — and, unfortunately, particularly common — when the "wrongdoing" in question refers to an incident of sexual harassment.

Still, much too often, this is the only kind of makeshift acknowledgement women are offered. But, in taking preliminary steps toward eventually changing this culture, Harmon's masterclass in "How to Apologize" seems like a pretty decent start.