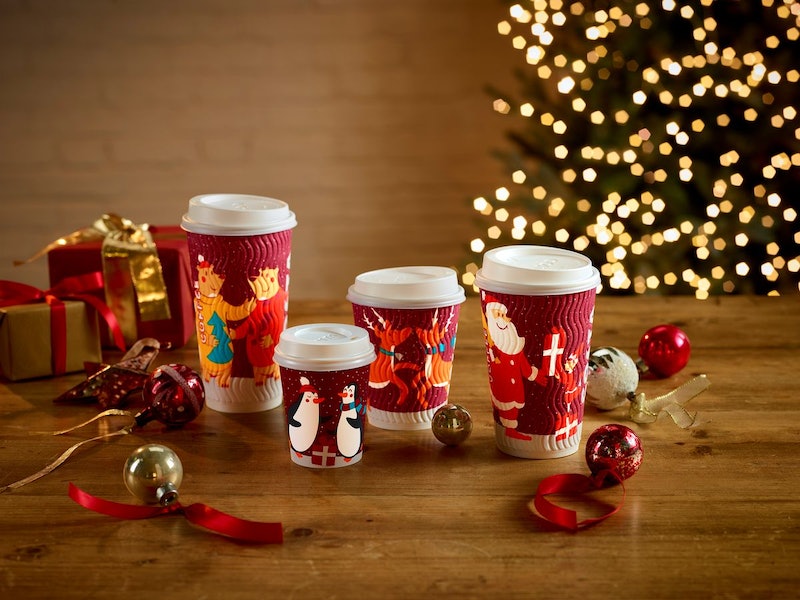 Halloween is now a thing of the past, and we all know what that means. Yes, soon we'll be hearing All I Want For Christmas on repeat as we munch on mince pies and get merry. Christmas 2019 is coming. And right on queue, Costa has announced its Christmas Menu for 2019. Let's see what's on offer this year.

There's a whole range of new food items on the new menu, the stand-out option being a Terry's Chocolate Orange Muffin, which could well be the greatest item on the dessert menu and is filled with Terry's chocolate orange ganache. I mean, how amazing does that sound? Then there are some fun-looking cookies shaped like Father Christmas and Peter the Penguin. Of course, mince pies are featured on the list, as are vegan gluten-free mince tarts. Nice. There's also a salted caramel yule log or a black and white forest cake.

There are also a number of sandwiches to get you in the festive mood including a turkey, bacon, and stuffing wrap, a turkey with all the trimmings toastie, and a very festive-sounding pigs under the blanket stonebaked panini. The vegetarian sandwich features "festive veggies," or, if sandwiches aren't your thing, you could opt for a spiced parsnip soup. A definite stand out on the food menu is the British pigs & blankets mac and cheese, which looks incredible.

There are also nine new drinks to look forward to, including an Irish Velvet & Cream latte. Typically Irish coffees contain whisky, but there's no risk of you getting too merry on these as Costa have confirmed that the whisky will be replaced by syrup with vanilla and caramel. The other festive drinks include a spiced cappuccino, and a Hazelnut Praline & Cream latte. Last but not least is the Gingerbread & Cream latte.

These items are available from your local Costa from November 1 to January 1. Two whole months of festive food? Count me in.