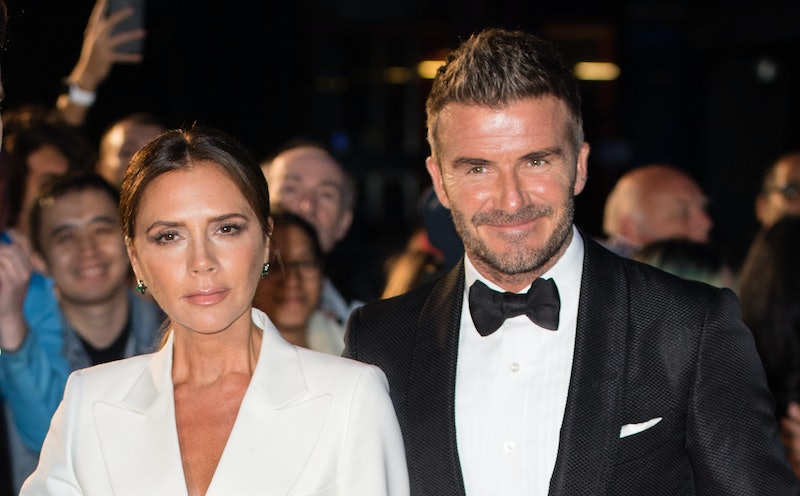 Victoria Beckham is a legend in music, fashion, and beauty, and she's also one of the most-watched people on social media. The mum of four is known for showing her more serious side to the outside world, often pouting and looking lowkey glam in photos, rather than sharing any big smiles. But her son Cruz did just post a rare photo where she looks totally different, which led to some gentle teasing from her husband, David.

The Beckham children are often sharing snaps of their superstar mum on Instagram, and 15-year-old Cruz Beckham just posted a mirror selfie of the two of them in their dressing gowns. Unlike her usual pout, in this snap, VB is seen unleashing her pearly whites with a big smile. Unsurprisingly, husband David had something to say and I'm NGL, it was pretty hilarious.

"How white are mums @victoriabeckham teeth ? it’s Ross from friends," he wrote, alongside a laughing face emoji. For those unfamiliar with this reference, the football star is harping back to the episode of Friends in which David Schwimmer's character gets his teeth whitened to such an extreme that they actually glow in the dark.

Unsurprisingly, the comment has already racked up over 12,000 likes, and hundreds of replies, some of which tag Schwimmer in to get his verdict.

As if that wasn't funny enough, Cruz's caption on said picture appears to playfully mock his Mum's resistance to showing teeth in most photos, as he wrote: "Apparently my mum does smile," followed by a smiling face and a love heart emoji.

Victoria is yet to respond to her husband and son's cheeky comments, but knowing her, it's only a matter of time!