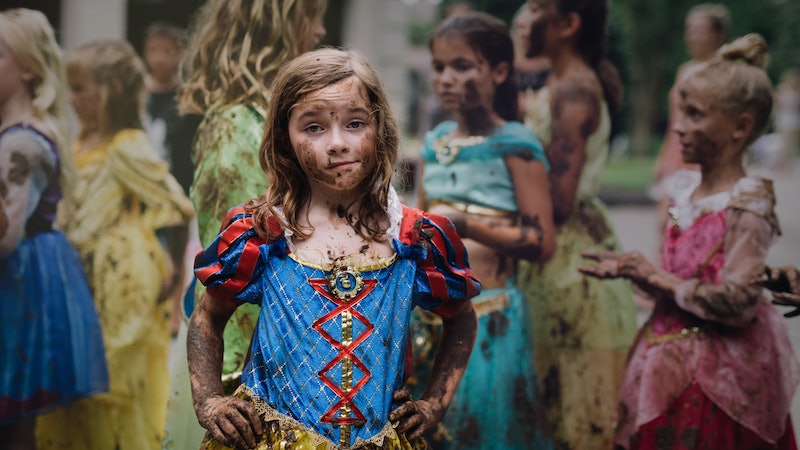 Princess culture often gets a bad rap — but it’s worth remembering that princess play isn’t inherently bad. Indeed, as the #DreamBigPrincess photo campaign from Disney points out, there are plenty of positive lessons to takeaway from princess stories — and they don’t all have to cleave to the same gender roles we’re used to seeing over and over again.

The #DreamBigPrincess photo series asked 19 photographers who identify as women from 15 countries around the world to take photographs of people — and, through those photographs, tell stories — they believed would have the power to inspire kids. Said Jimmy Pitaro, Chairman of Disney Consumer Products and Interactive Media, in a press release, “The idea that stories, whether real life or fictional like those of Belle or Rapunzel, can inspire kids to follow their dreams is at the heart of the #DreamBigPrincess campaign.” He continued, “We asked some of the most accomplished female photographers to help tell the stories of inspiring women and girls from around the world — and the results are incredible.”

Disney first launched the “Dream Big, Princess” campaign in 2016 as a way to “[encourage] kids everywhere to dream big by highlighting key story moments and the inspiring qualities that each Disney Princess showcases through her adventures, such as Merida’s bravery, Cinderella’s kindness, or Tiana’s perseverance," according to a press release The idea is that each Princess has unique qualities, while having in common the fact that they’re enormously resilient and capable of “making their dreams come true.” The campaign aims to bring together what’s inspiring about each Princess with real-life stories and role models, giving kids something to look up to and aspire to.

And that’s exactly what the #DreamBigPrincess photos do — and in a wide variety of ways, at that. Photographer Kate T. Parker, for example, photographed her 9-year-old daughter Alice with her soccer team; all of them are dressed as princesses, and all of them are covered in mud:

Annie Griffiths, meanwhile — who, by the way, was one of the first women photographers ever hired by National Geographic — shot 19-year-old Sasha Ariel Alston, a Pace University student who, by publishing a coding book aimed at kids, hopes to encourage more girls to study STEM subjects from an early age:

Does the “Dream Big, Princess” campaign sound kind of like it’s an effort to rehab the “princess” image? Kind of, yeah. And it's true that “princess culture” can be problematic; a 2016 study, for example, found that girls who engaged heavily with princess culture also tended to exhibit more stereotypically “feminine” behavior — that is, princess culture can have a habit of reinforcing gender roles from an early age. Additionally, particularly in some of the kid’s media options from bygone decades, some of the lessons taught by old-school princess stories are outmoded and harmful: That beauty is a moral virtue, that women’s value is determined by their beauty, that we are not capable of rescuing ourselves, that we need to wait for a prince to come and do it for us. More recent media is working to change that, but classic princess stories likely aren’t going to go away anytime soon.

That said, though, it’s not as simple as “PRINCESSES ARE BAD! WE SHOULDN’T LET GIRLS PLAY PRINCESS!” Our culture has a tendency to devalue things traditionally coded as “feminine” — and if we absolutely forbid kids to play princess, then we’re just feeding into that deeply embedded societal sexism even more. The point isn't that we shouldn't play princess, or that we should play dinosaurs instead; the point is that it's OK to play princess and dinosaurs. You don’t have to pick one or the other. You can choose what’s right for you, whether that’s one of those options, both options, or something else entirely. As photographer Kate Parker put it when speaking about her photograph of her daughter and her soccer team to Vogue, “A lot of girls feel like you have to either be a tomboy or a girly girl who dresses up. But Alice likes both things. I wanted her to know that that’s OK and you can be anything you want to be.”

I also think it’s notable that the “Dream Big, Princess” campaign is focused on the princesses themselves — not on the princes, or even on how the princesses relate to the princes — and the actions they take throughout the course of their stories in order to “make their dreams come true.” It gives them agency — even for older princesses not known for taking action. The campaign doesn’t, for example, emphasize Cinderella’s beauty as capturing the attention of Prince Charming; it deals with her kindness: She chooses to treat every living creature kindly, no matter how small they are. That’s a virtue no matter who you are or how you identify.

The campaign is also working to help in a more tangible way, as well: Every time a photo is posted publicly with the hashtag #DreamBigPrincess (or one of several others, all of which cover many different languages — check out the full list here), and every time a publicly posted photo with the hashtag is liked on Facebook,Instagram, or Twitter, Disney Worldwide Services will donate $1 to Girl Up, the United Nations Foundation’s campaign aimed at empowering girls. Said Girl Up director Melissa Kilby in a press release, “Girl Up envisions a world where every girl can reach her full potential and be an advocate within her community for positive change and empowerment. The #DreamBigPrincess campaign is perfectly aligned with our goals and we’re excited to partner with Disney and this incredible group of women to spotlight what it means to dream big around the world.” Disney will match hashtag posts and likes for a minimum of $500,000 and a maximum of $1 million.

To find out more, check out the “Dream Big, Princess” website.

More like this
Netflix Reveals First Look At Wednesday In The 'Addams Family' Spinoff Series
By Bustle Editors
A New 'And Just Like That' Table Read Pic Confirms A Key Character's Return
By Jack Irvin and Grace Wehniainen
20 Photos Of The 'Hocus Pocus' Cast Then & Now
By Radhika Menon
24 Years Ago, 'Friends' Dropped Its Most Underrated Ross & Rachel Episode
By Grace Wehniainen
Get Even More From Bustle — Sign Up For The Newsletter