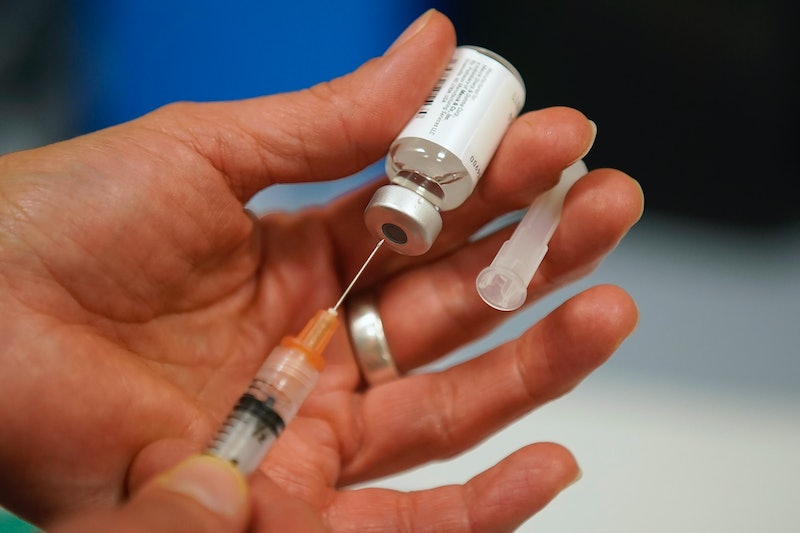 With the current measles outbreak affecting over 700 people in different regions across the U.S., according to the Centers for Disease Control & Prevention (CDC), you might be wondering if you need to get re-vaccinated for the measles if you were inoculated as a kid. Measles is a super contagious viral illness that can cause an uncomfortable fever and rash, and while it typically will resolve in a few weeks, it can be serious or even fatal for young children who haven’t received the MMR — measles, mumps, and rubella — vaccine. And while, thanks to high rates of vaccination, measles was completely eradicated from the U.S. until recently, its current resurgence is a major cause for concern for people who are immunocompromised or who can’t receive the vaccine. If you aren’t sure about whether or not to get a measles booster, here’s what doctors want you to know.

The reason measles was declared eradicated in 2000 was because, well, most people had gotten their two doses of the MMR vaccine, which is 97% effective at preventing the disease (and which, according to the CDC, renders a person immune for life). That said, as On Immunity author Eula Bliss recently told the Cut, the vast majority of issues with vaccination come from “people who undervaccinate or who don’t vaccinate on schedule,” rather than people who are opposed to vaccines. That’s why the first question is to figure out if you did receive both doses of the MMR vaccine as a kid.

“If you’re unsure if you’re immune to measles, try and find your vaccination record or documentation of immunity,” Dr. Julie E. Mangino MD, FSHEA, FIDSA, Professor Emeritus at the Ohio State University Department of Internal Medicine, tells Bustle. “Another option is to have a doctor test your blood to determine if you are immune.” If you can’t find these records, or you’d prefer not to get a blood test, “There is no harm in getting another dose if you may already be immune,” Dr. Mangino says.

If you’ve confirmed that you have had both doses of the vaccine, then you are protected from the virus. “At this time, there is no recommendation for another dose of the vaccine if as an adult you were born before 1957 (before 1957 most people contracted measles and are considered immune), or have had 2 doses of vaccine or have evidence of immunity by a blood test,” Dr. Dana Hawkinson, an infectious disease specialist at the University of Kansas Health System, tells Bustle.

People who have only had one dose of the vaccine are closer to 93% protected from the virus, the CDC says, and should seek out that second dose. Even if you think you’ll be OK with 93% immunity, compared to 97%, the reason it’s important to be fully vaccinated has to do with herd immunity, AKA the reason why measles had been eradicated until recently. If 90 to 95% of a population is inoculated against measles, it’s way harder for it to spread to that 5% or 10% that isn’t inoculated, Dr. Manish Sadarangani told the Oxford Vaccine Group in 2016. But if a community doesn’t have herd immunity, it puts people who haven’t gotten the vaccine and people who are immunocompromised at increased risk of catching it — and these are the people for whom the disease will be much more severe.

“Prior to vaccination, it was estimated that 3 to 4 million people per year would contract measles with only 500,000 generally reported,” Dr. Hawkinson says. “Of the reported cases, about 500 would die and nearly 50,000 would require hospitalization” for potentially fatal complications like pneumonia or encephalitis. “The vaccine is very effective in preventing the disease, and hence, the complications.”

But Dr. Hawkinson says that people have lost sight of how dangerous measles really can be — and that’s putting more of us at risk. “People in this day and age have not been able to see the devastation some of these vaccine preventable diseases can bring on a child, a loved one or a household. ... I continue to vehemently advise vaccination for myself, my loved ones, and my patients.”