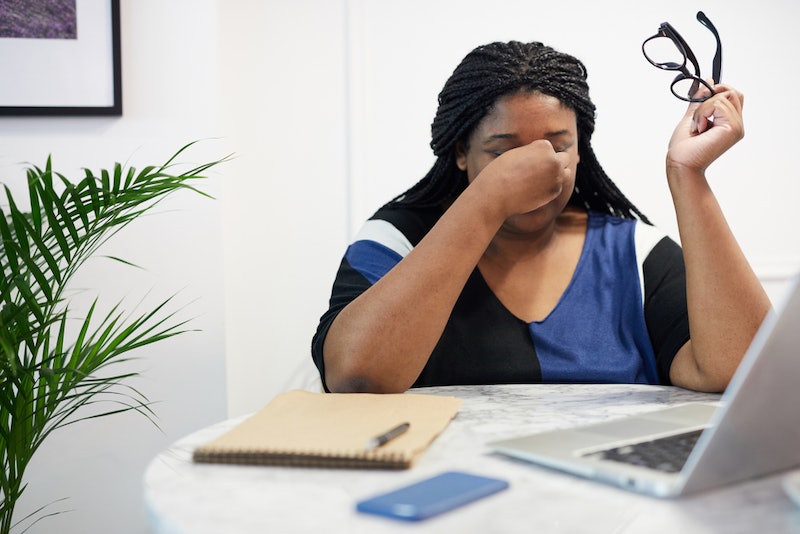 “Smile,” people are often told, “even if you don't mean it. It’ll make you feel better.” Rooted in outdated psychological literature, the “facial feedback” of smiling ⁠— even when you don’t mean it ⁠— is often thought to improve your mood. However, a new study confirms what many have long suspected: faking a smile does not actually make you happier.

The facial feedback hypothesis suggests that physical changes in facial muscles can trigger a change in internal emotions: i.e., that smiling on the outside can make you happier on the inside. The myth of facial feedback dates as far back as the 1800s, when Charles Darwin claimed to find an “intimate relation” between external manifestations of emotions and internal sensations of emotions. Darwin used this logic to conclude that expressing emotions intensified them, while repressing emotions succeeded in making them less intense (something anyone who's been to therapy will know is Not A Thing).

While science has long-since refuted the myth that emotional suppression actually decreases the suppressed feelings, the idea that faking a smile can make you happier has stuck around. The principal study that psychology classes and popular wisdom cite regarding facial feedback is a 1988 study that seemed to show that holding a pen in your mouth and tilting it upwards with your lips ⁠— thus simulating a smile ⁠— can make you perceive cartoons as funnier (and therefore, make you happier).

However, the recent study published in the journal Psychological Bulletin found that labs across the world failed to reproduce the results of the 1988 study. Further, the study, which reviewed around 50 years of data, suggested that if 100 people were to fake a smile, only seven would feel happier as a result, and even for those seven, the changes in mood would be very slight.

So if faking a smile doesn’t actually improve people’s moods, why is facial feedback such a wildly popular myth? Faking a smile is ultimately about making someone else more comfortable with your true emotions: the myth that someone should fake a smile in order to be happier draws attention away this power dynamic.

These damaging power plays are highlighted in rising cultural rejections of the facial feedback myth. Singer Halsey has a new song called “Nightmare,” in which she sings about refusing to fake a smile. In the song, she channels the rage that fills so many nonbinary folks and women when a man says, “come on, little lady, give us a smile.” Concluding that “I don’t owe you a godd*mn thing”, Halsey’s song encapsulates the social mores that may well have helped fuel the mythical belief that faking a smile can actually make someone happier.

Making other people feel comfortable with your own faked smile is also an expectation that shapes customer service professions. There is a strong cultural acceptance of the fact that “good” customer service is associated with constant smiles and a generally cheery performance.

However, these performances are dangerous for workers. According to a recent study published in the Journal of Occupational Health Psychology, customer service professionals whose job requires them to smile for customers all day drink more alcohol than workers with different employment expectations. The study concluded that the emotional labor of creating a falsely comfortable environment for others by suppressing their own emotional needs drove customer service professionals to drink heavily to cope at the end of the workday.

A similar study published in 2018 in the journal Qualitative Health Research concluded that the burden of this emotional labor extends into many different professors. The study found that women nurses of color practicing in "the white institutional space of American healthcare... experience an emotional double shift as a result of negotiating patient, coworker, and supervisor interactions.” So while forcing smiles may help make people in power feel more comfortable, it can be quite dangerous to the health of those being told to smile.

So whether it’s some man on the street telling women to smile ⁠— and Captain Marvel showed us there’s only one way to respond to that ⁠— or a psychology class saying that fake smiles will make you happier, just remember that you haven’t got to smile for anyone. Not even yourself.

More like this
These Are The Fastest Electric Kettles You Can Buy
By Margeaux Baulch Klein
11 Super Bowl Instagram Captions To Use On Game Day — Even If You Don’t Like Sports
By Alexis Morillo
Flip Phones Are Gen Z's Favorite New Nightlife Accessory
By Maria Santa Poggi
Everything You Need To Know About The Samsung Galaxy S23 Ultra’s New Camera
By Alexis Morillo
Get Even More From Bustle — Sign Up For The Newsletter
From hair trends to relationship advice, our daily newsletter has everything you need to sound like a person who’s on TikTok, even if you aren’t.