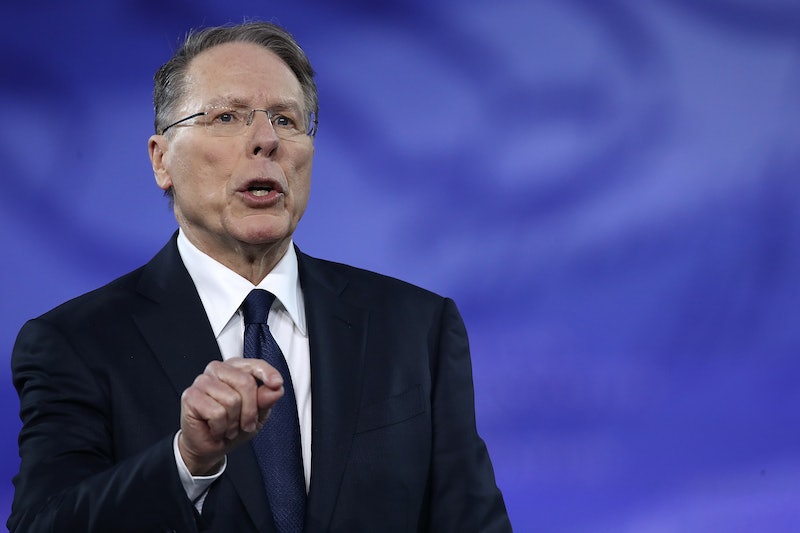 For weeks, the United States has seen a sizable amount of its national attention devoted to issues of gun violence and gun control, in large part as a result of the deadly school shooting at Stoneman Douglas High School in Parkland, Florida last month. There's also been a lot of attention and scrutiny focused on the National Rifle Association, raising questions of where the organization's money goes, and why. For example, you might wonder: does the NRA give any money to schools? And if so, for what purpose?

A recent analysis from the Associated Press has shined some light on the answer. In total, the NRA reportedly gave away approximately $7.3 million to about 500 schools from 2010 to 2016. Some school districts have recently announced they'll stop taking money from the NRA, such as the Broward County school district which includes Stoneman Douglas.

In the weeks since the shooting, it's been reported that the Stoneman Douglas gunman, a 19-year-old former student, had been a member of a school air rifle shooting team that was funded through an NRA grant. According to the AP's report, programs like that are what the NRA's grant money mostly goes towards ― in other words, funding for sport shooting clubs in schools.

In addition to Broward County, Denver Public Schools will also reportedly turn down NRA grant money in the aftermath of the Parkland shooting. Another initiative the NRA frequently backs is the Junior Reserve Officer Training Corps, or JROTC.

According to The Denver Post, not everyone in Florida has a problem with the NRA school grants. The paper quoted Polk County school board member Billy Townsend, who claimed that the funding to purchase air rifles for the JROTC was an appreciated gesture.

"Whatever I think of the NRA, they’re providing legitimate educational services," Townsend said, whose district reportedly received $33,000 in JROTC funds from the NRA. "If the NRA wanted to provide air rifles for our ROTC folks in the future, I wouldn’t have a problem with that."

According to the AP, despite the stand being taken by Broward County and Denver Public Schools, not many school districts who've accepted NRA money are planning to refuse it in the future. In the weeks following the Parkland shooting, gun control advocates have increasingly exerted pressure against the NRA, attempting to organize advertiser boycotts and raise awareness about how the pro-gun group spends its money.

Some corporations have also voluntarily changed how they handle gun sales, with Dick's Sporting Goods and Walmart both implementing voluntary reforms raising the age at which people can purchase firearms, and Dick's halting the sale of assault rifle-style semi-automatic firearms outright.

Even Florida's Republican governor Rick Scott publicly broke from the NRA's orthodoxy in the aftermath of the shooting, signing a gun reform bill into law raising the minimum age to purchase a firearm in Florida from 18 to 21.

The bill also allowed for firearms-trained members of school staff to carry guns for protective purposes, provided they meet certain criteria. Broadly speaking, that part of the bill has been characterized in the press as an embrace of the "arm the teachers" idea President Donald Trump has voiced since the Parkland shooting. Although, thanks to the criteria laid out in the bill, few actual teachers are likely to qualify ― the law specifically excludes those who "exclusively perform classroom duties as classroom teachers" from carrying guns.

It remains to be seen whether any other school districts end up refusing the NRA's grant money in the weeks of months to come. But whatever happens, the financial activities of the NRA are drawing a lot of attention in the public sphere right now.