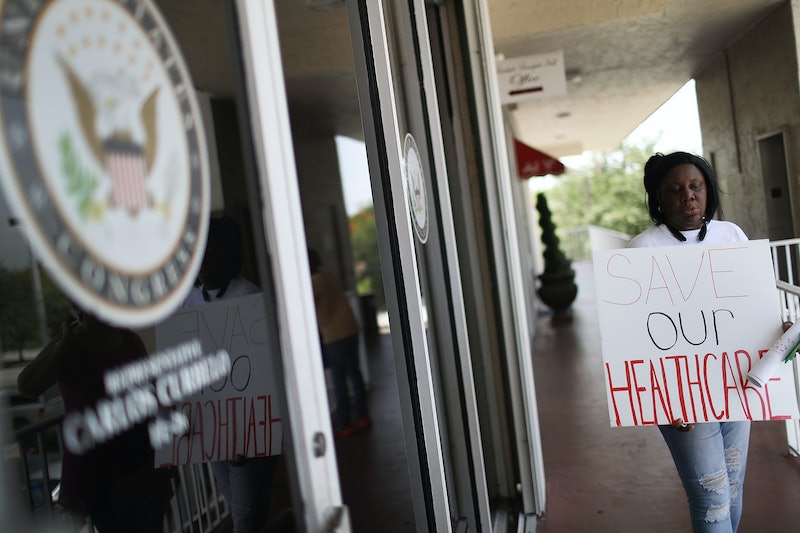 On Monday, the Justice Department shifted the Trump administration's position on Obamacare by telling a judge that it supports killing the whole law. If the courts agree with the administration, millions of Americans could lose their health insurance — and even those who stay insured would see big changes. For women, scrapping Obamacare would eliminate protections that have made health care more accessible for millions.

Under the Affordable Care Act (ACA), insurers aren't allowed to charge co-pays for birth control, deny coverage to pregnant women by classifying pregnancy as a pre-existing condition, or charge women more than men for their health plans.

Before the law was enacted, insurers treated women very differently than they do today. For one thing, pregnancy was seen as a pre-existing condition, and in almost all states, women could be denied coverage if they were pregnant.

Birth control was not always covered at no-cost, and many women had co-pays for their contraception. Some plans required that a deductible be met before birth control would be covered, so women ended up paying the full amount. That could cost as much as $50 a month and $250 for the accompanying office visit, according to Planned Parenthood, a total of $850 a year that now must be covered by insurance.

For women who weren't yet pregnant but wanted maternity care to be covered, they were usually out of luck if they were buying their own individual plan. Most excluded maternity care, and getting coverage through an employer was nearly the only way.

On top of all this, women paid more for their coverage before Obamacare. The law eliminated what was called a "gender rating" that allowed insurers to charge women more. This added up to about $1 billion annually that women paid over what men did for the same health care plans, according to the Wharton Public Policy Initiative.

Coverage for transgender women will also change if Obamacare is rolled back. Civil rights legislation written into the Affordable Care Act prevented transgender people from being discriminated against by health insurance companies, doctors, or hospitals. The Obama administration wrote regulations and rules based off the ACA that encoded these protections. The Trump administration has reportedly tried to get rid of these protections by rewriting the rules, but getting rid of the underlying legislation would be even more extreme, according to The New York Times.

There are multiple facets of Obamacare that protect men, too. For example, it allows young people to stay on a parent's plan until age 26. And no one can be denied coverage for any pre-existing conditions, even serious diagnoses such as cancer.

All these protections come on top of the key issue — that millions of men and women would lose their insurance if the ACA were overturned. Dr. Leana Wen, president of Planned Parenthood, hammered home how serious that situation would be in a statement provided to Bustle.

"I’ve practiced medicine before and after the ACA, and I have seen the profound impact it’s had on the health and well-being of patients," Wen said. "In the emergency room, pre-ACA, I treated a young woman who died from cardiac arrest because she couldn’t afford treatment for the heart condition she was born with."

Killing Obamacare would have broad implications for all Americans, but women have even more to lose.