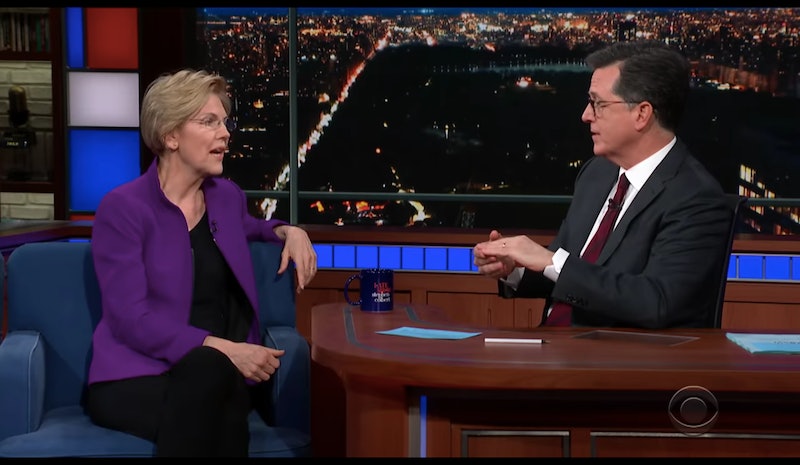 The Late Show with Stephen Colbert/CBS

Over the weekend, Attorney General William Barr released a summary of Special Counsel Robert Mueller's much-anticipated report. While many in Washington have been clamoring to know more information about the special counsel's investigation, one senator believes that most Americans will soon be ready to move past it. Elizabeth Warren said the Mueller report probably won't be voters' top concern in 2020, emphasizing that people will instead prioritize issues that affect them more directly.

Senator Warren, a Democrat from Massachusetts, shared her thoughts about the special counsel's report during an interview with Stephen Colbert on Monday. As she spoke with the late night host, Warren stressed that, while she believes the Mueller investigation is "important," it's not at the top of voters' minds. As the senator told Colbert:

I spent the last couple of days in New Hampshire ... probably altogether over the weekend [I] got maybe 100 questions [from the public]. And, do you know the number that were about the Mueller report? Zero. Because what people were talking about, what they're asking about, are the things that touch their lives every day.

Warren added that, because the 2020 presidential election is fast-approaching, she believes voters are primarily focusing on issues that are "going to help us decide what kind of a country we're going to be going forward."

While Warren doesn't think that the Mueller report is a top issue for many Americans, she does believe that the special counsel's full report needs to be released. Right now, the public (and Congress) only has access to a four-page summary of the report provided by the attorney general, though six Democratic committee chairs sent a letter to Barr on March 25 requesting that he provide the full report to Congress by April 2, NBC reported.

In her interview with Colbert, Warren emphasized the importance of seeing Mueller's full report. When Colbert asked the senator whether she trusted Attorney General Barr's "judgement" on whether or not Trump allegedly obstructed justice (Barr concluded that he did not after the special counsel's report didn't make a decision on the matter), Warren replied, "No." The senator also added, "And you shouldn’t have to ask me if I trust it ... We should see the whole report. When we see the whole report, we’ll know what the basis is for this, period.” Trump has always denied obstructing justice, Reuters reported.

Overall, as Senator Warren continues her 2020 presidential campaign, it seems clear that she plans to ensure that issues that are priorities for voters are priorities for her as well. If the special counsel's full report is released by the attorney general, it will be interesting to see whether Warren's conclusion about the interest voters have in the matter will hold true.