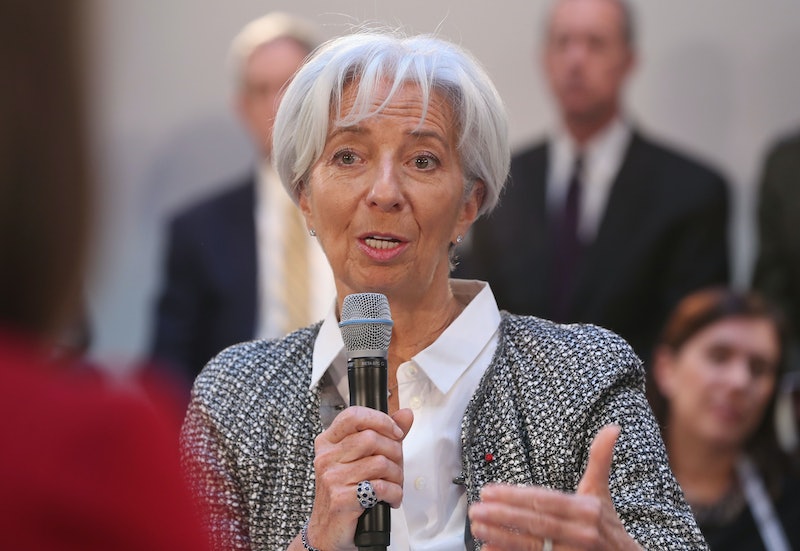 The benefits of employing more women, seeing more female employees at the top, and tackling in-work sexism and gender-based discrimination seems obvious. Providing a sufficient support network to help women succeed will only lead to more women and girls seeing that they can do it too, meaning the workplace will become a more diverse and inclusive place. However, it would seem that the benefits of bringing more women into the work place extend beyond visual representation. The head of the International Monetary Fund has said that employing more women will actually make the world economy richer.

In an interview with the Guardian to mark for International Women’s Day, Christine Lagarde said that, if some countries considered getting rid of discriminatory laws, they could see their economies grow by 35 percent. While recognising the talents that women can bring to the workplace is so important, she highlighted that world economies would also be less prone to financial collapse. From where I am sitting, that's a win-win.

Lagarde discussed new research conducted by the International Monetary Fund with the Guardian. She stated:

“Things are changing. There was a time when women in the economy, women in employment, women in finance were not seen as macro-critical. That’s no longer the case.”

Largarde continued: “What we have observed is that when there are more women the banks’ capital buffers are larger, the number of non-performing loans is smaller and the risk indices are lower. It is not causality but it is a strong correlation.”

In 2018, the World Economic Forum published its annual Global Gender Gap report. It found that the global gender gap will take 108 years to close, and economic gender parity will take even longer, being 202 years off. Fewer women than men were seen to be participating in the labour force and political life and access to health and education had suffered. For the tenth year running, Iceland took top spot, having closed 85.5 percent of it’s overall gender gap. This was closely followed by other Nordic countries Norway, Sweden, and Finland. The UK ranked fifteenth out of 149 countries.

Taking into account spending and access to health and education, Lagarde said that countries ranked in the bottom 50 percent for gender equality stood to gain the most — up to a 35 percent increase in their economies.

Stating the importance of empowering women in the work place, Lagarde told the the Guardian:

“Being a feminist is not something that is reserved to women. I know many men who are feminists, who help and struggle to make sure there is no discrimination.”

Promoting and encouraging more women into positions of power is awesome. It not only gives other women out there something visible to aspire to, but it’s also great for the economy. As we approach International Women’s Day, I love that a light is being shone on all of the more-than-capable women going out there every day and owning what they do.

More like this
Women Around The World Are Cutting Their Hair In Solidarity With Mahsa Amini
By Darshita Goyal
The Queen’s Cause Of Death May Not Be Formally Announced
By Shahed Ezaydi and Catharina Cheung
Will Archie & Lilibet Attend The Queen's Funeral?
By Sam Ramsden
Deliveroo Is Selling Lotus Biscoff Cinnabons Now
By Darshita Goyal
Get The Very Best Of Bustle/UK