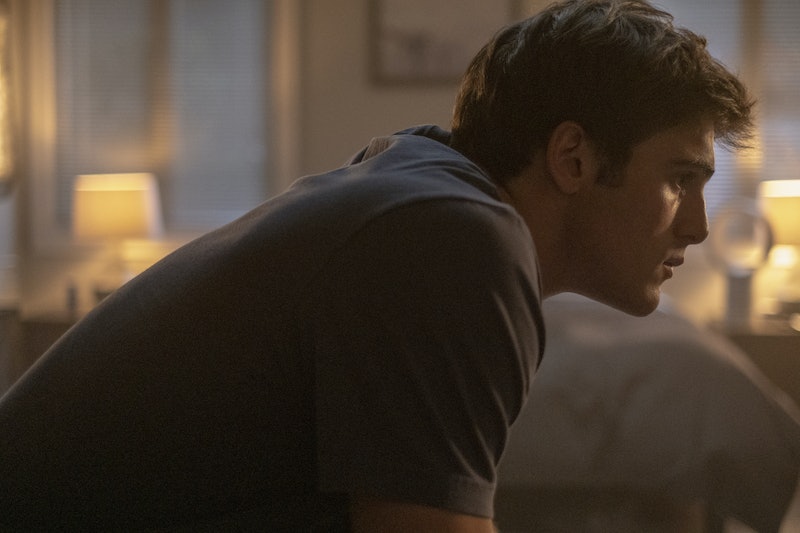 Spoilers for Euphoria Season 1. While there are many reasons to feel worried about Nate Jacobs after Euphoria's finale, fans are most concerned about his brother. In the Euphoria premiere, a photo of Nate and his family popped on the screen. In it, fans noticed there was a third brother that was never seen on screen. Now, actor Jacob Elordi is responding to the fan theory about Nate's missing brother. Turns out, he's as confused as everyone else is.

This season, fans saw Nate's older brother, Aaron, but his younger brother was nowhere to be found. Weirder, there was also no mention of him, he only exists in that photo. Could he be the key to understanding Nate, who quickly turned into the villain of Euphoria with his toxic and violent behavior?

In an interview with Entertainment Weekly, Elordi addressed the rumors that there is another brother. "We haven’t seen him. I don’t know where he went. I have no idea," the Australian actor said. In fact, he said that, like fans, he had questions about the prop photo, too. "I was like, 'You do realize that there’s different child in this picture?'" he told EW. "And everyone just didn’t really say anything. I don’t know."

Now, Elordi's confusion about this third brother doesn't mean he won't show up in Season 2. Reddit has already come up with many theories explaining where the boy could be, including that he was the boy Jules saw in the psych ward. Others have even guessed that the young boy is a character we've met already. Perhaps, Nate is related to Fezco or Ashtray. Or, maybe, his brother is Ethan.

The general consensus, though is that the story of Nate's missing brother is tragic. This theory is supported by not only the closeup of the family photo, but the fact that this same photo pops up on the background of Cal's phone in the pilot, according to The Heavy. A sign that this photo was taken during happier times that Cal hasn't moved past in the years since.

For now, though, fans are wondering where Nate goes next after that violent fight with his father Cal (Eric Dane) that left him banging his head on the floor in defeat. One theory is that Nate will be caught with child pornography for showing a video of an underage Cassie (Sydney Sweeney)

As for what Elordi wants for Nate in the second season, he told EW he's still deciding what's best for the character. "Whatever it is, I want him to have a life and I want it to be honest. I truly don’t have any qualms about which direction it goes. I mean, obviously, it would be a lovely story if he turned out to be a real sunflower and lit up the world," he said. "But I definitely want it to be just true and real to his experience and I want it to kind of make sense. And I’m not sure what that looks like."

Neither do fans, which means they have until Euphoria returns, which might not be until next summer, to think about it.