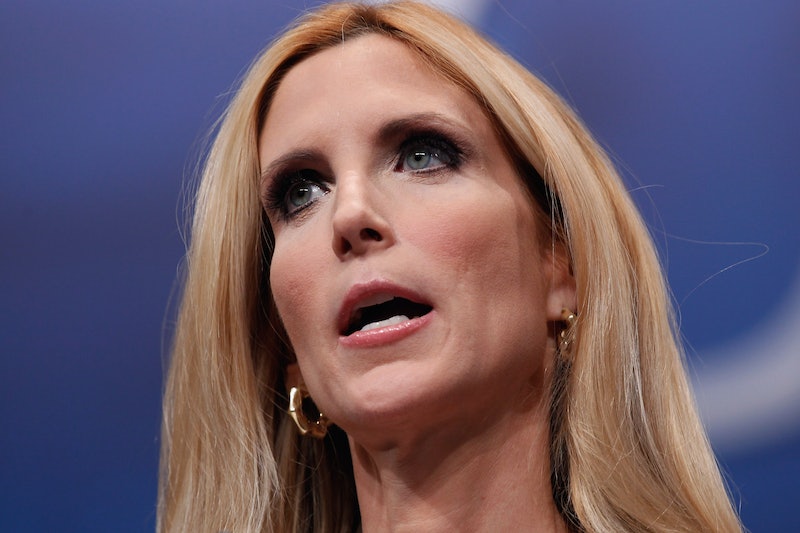 Regret is quickly becoming a running theme among many American voters who voted for Trump but now feel betrayed by the president. Among those experiencing a bout of disappointment is the conservative commentator Ann Coulter, who authored the book, In Trump We Trust. During an exchange with the Daily Caller, Coulter admitted she was not happy about Trump and feared that his critics were right about him all along.

To be clear, Coulter did not have an epiphany overnight that caused her to rethink her controversial views and become progressive. The far-right personality who once proclaimed "blind loyalty" to Trump in her book expressed dismay over the perceived delay in Trump delivering on his promises, particularly on the border wall with Mexico which Coulter strongly supports — "Trump's constitutional duty," she called it.

"I’m not very happy with what has happened so far. I guess we have to try to push him to keep his promises. But this isn’t North Korea, and if he doesn’t keep his promises, I’m out," Coulter said. She also went on to say that she maintains hope for Trump and isn't leaving the building — yet. "My fingers are still crossed. It’s not like I’m out yet, but boy, things don’t look good," she told the Daily Caller.

Coulter acknowledged that she did not entirely agree with Trump's personality. She described him as "grotesque" but pointed out that focus should be on the promises Trump made during his presidential race which included a "big, beautiful wall." She went on to say, "Where is the great negotiation? ... That budget the Republicans pushed through was like a practical joke. ... Did we win anything?"

One of the most remarkable admissions from Coulter's interview with the Daily Caller was her opinion of the "one fascist thing" she believes Trump did — "hiring his kids." That's it. Trump ramping up deportations, the Republican's health care bill potentially causing 24 million Americans to lose their insurance, or even his comments on women don't really make it to Coulter's list of reasons to be disappointed in Trump.

In spite of the letdown, Coulter told the Daily Caller that she does not plan on apologizing for rallying for Trump. She praised him for saying "the right things" and noted that Trump is the "last shot" while collectively calling the Congress "swine." Ultimately, if case "Trumpism" fails, Coulter won't be going anywhere. She'll be right here to lend support to Jeff Sessions or Kris Kobach, among "a handful of politicians." Good luck?