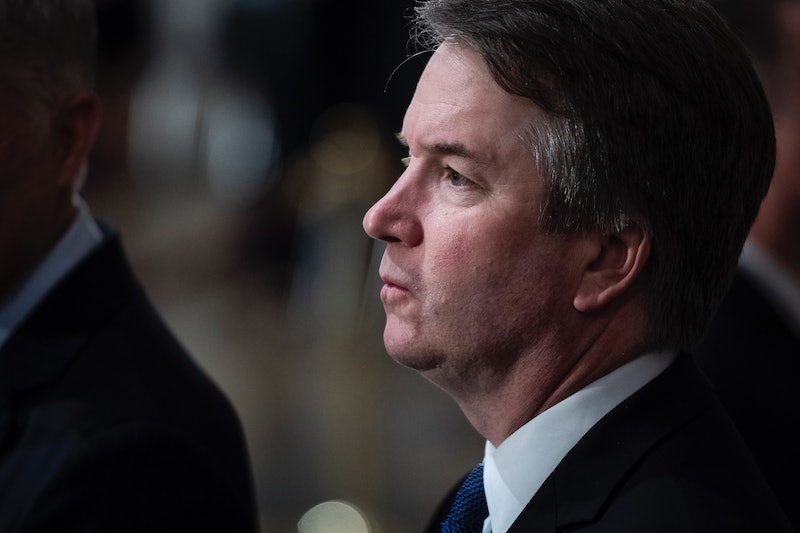 Brett Kavanaugh's behavior during his Supreme Court confirmation hearings was condemned by his critics, and 83 ethics complaints were ultimately brought against him. Coming on the heels of his appointment to the Court, some saw the ethics case as a second chance for him to answer to Democrats' criticisms. But on Tuesday, the judicial council of the 10th Circuit issued an order dismissing all ethics complaints against Brett Kavanaugh.

The 10th Circuit Court said it doesn't have the authority to investigate the complaints. "Congress has not extended the Judicial Conduct and Disability Act to Supreme Court justices," explains the order, which was signed by Chief Judge Timothy M. Tymkovich. It adds that "due to his elevation to the Supreme Court, Justice Kavanaugh is no longer a judge covered by the Act."

The complaints related to recent statements that Kavanaugh made before and during his hearings, according to Forbes. NPR reports that they included accusations that he'd lied to the Senate about his time working in the White House under President George W. Bush, as well as partisan statements in which he accused Democrats of using his confirmation to get "revenge on behalf of the Clintons."

The 10th Circuit does seem to agree that Kavanaugh's comments are worth investigating, though. "The allegations contained in the complaints are serious," the court order notes, "but the Judicial Council is obligated to adhere to the Act."

The act allows complaints to be brought against federal judges — a category of which Supreme Court justices are technically a part. "The theory behind excluding Supreme Court justices [from the act]," the Brookings Institution's Russell Wheeler has written, "is that it would be at least unseemly for lower court judges to discipline Supreme Court justices." Many have criticized this loophole because it seems to give justices impunity. That's why Sen. Chris Murphy (D-Connecticut) introduced a bill last year that would establish a code of conduct for the Supreme Court.

"Why shouldn't Supreme Court justices be held to the same ethical standard as every other judge in the country?" Murphy tweeted after the 10th Circuit decision. "My Supreme Court Ethics Act would fix that." Notably, though, his bill in its current form does not specify exactly how the code of conduct would be enforced.

New York University law professor Stephen Gillers has argued that the Judicial Conduct and Disability Act should apply to Kavanaugh's statements during the hearings because he was not a Supreme Court justice when he made them. At that time, he was still "subject to the Code of Conduct for U.S. Judges," Gillers told PBS in October. "Any violation of the Code does not disappear because he is now on another federal court."

The fact that the alleged violations have, in fact, seemed to disappear has caused some ire. "Ethically," Bloomberg's Noah Feldman writes, "the situation is more than a little bit outrageous."

But there is another way Kavanaugh could face consequences for the alleged violations. Congress has the power to investigate his behavior and even to impeach him. Some Democrats have indicated that the House may launch an investigation once they take control in January, though it could be difficult to win the necessary two-thirds of each congressional chamber to oust him.