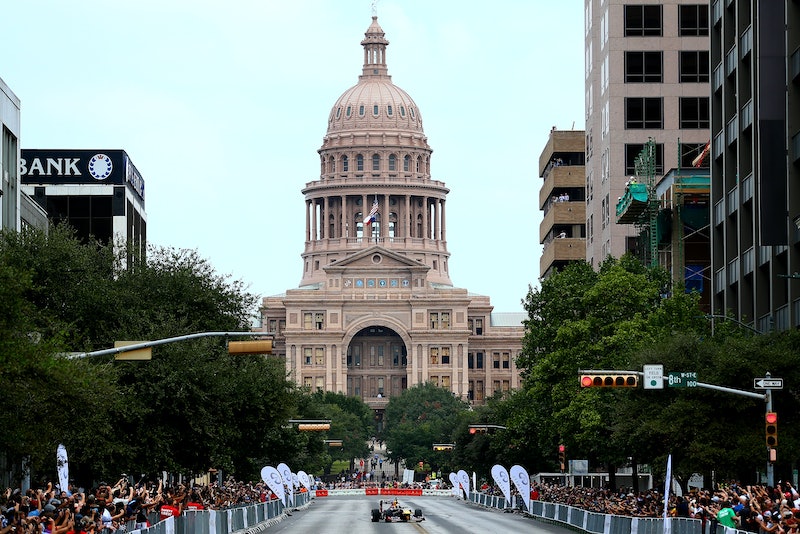 Unlike other forms of sexual assault, groping in Texas is not punished with jail time — but a new bill headed to the governor's desk would change that. On Friday, the state senate passed a bill that would criminalize groping in Texas, moving the offense up to a Class A misdemeanor of "indecent assault" that would come with a $4,000 fine and up to a year in jail, according to The Dallas Morning News.

If Gov. Greg Abbott signs the bill into law, touching someone's breasts or genitals without their consent "with the intent to arouse or gratify the sexual desire of any person" would fall into this new category. Also included would be exposing without consent someone's breasts, genitals, pubic area, or butt. As would be forcing someone to touch human blood, semen, vaginal fluid, saliva, urine, or feces to arouse them.

Until now groping has been a Class C misdemeanor with a $500 fine for punishment but no jail time. According to The Hill, that's similar to a traffic violation, because the person committing the offense cannot be arrested. The Houston Chronicle reported that under the current law, police can't even investigate groping if someone reports it.

The sponsor of the bill in the state house said that groping is more serious than that and should be reflected in the penal code. "Our laws are meant to protect and provide justice for all Texans," Rep. Joe Moody, a former prosecutor, told The Dallas Morning News. "When there are gaps in the law, it’s those real people who fall through them."

Chris Kaiser, director of public policy for the Texas Association Against Sexual Assault, has been spreading awareness about the status quo. "The current law … is really just designed for something like a couple of drunk people outside a bar, pushing and shoving, but nobody really gets hurt," Kaiser told The Houston Chronicle. "It’s not designed to address a serious sexual assault."

"It’s a real slap in the face [to survivors] to say this traumatic event, this sexual assault, just doesn’t really matter under Texas law," Kaiser added. "We’re hoping that by elevating the seriousness to reflect what it actually is — a traumatic sexual assault — that there will be some affirmation and some acknowledgment of what victims have gone through."

"The $500 fine doesn’t seem to be getting people’s attention, so moving it to possible jail time of zero to one years and a $4,000 fine will be a pretty effective deterrent, we hope," Perry told The Austin American-Statesman. "If it isn’t, we will come back and readdress the penalty."

If the bill becomes law, there will still be some parts of the country that treat groping so leniently. The Houston Chronicle reported that there are six states that have a law similar to Texas' current one on groping.

More like this
Amanda Gorman Shared A Powerful Message On Meghan Markle’s Penultimate Podcast
By Darshita Goyal
Claire Foy & Rooney Mara Revisit A Devastating Tale In 'Women Talking'
By Bustle UK
MOBO Awards Found Kanya King On The Woman Whose Grit & Determination Spur Her On
By Kanya King
The David Beckham Qatar Controversy, Explained
By Sophie McEvoy
Get Even More From Bustle — Sign Up For The Newsletter