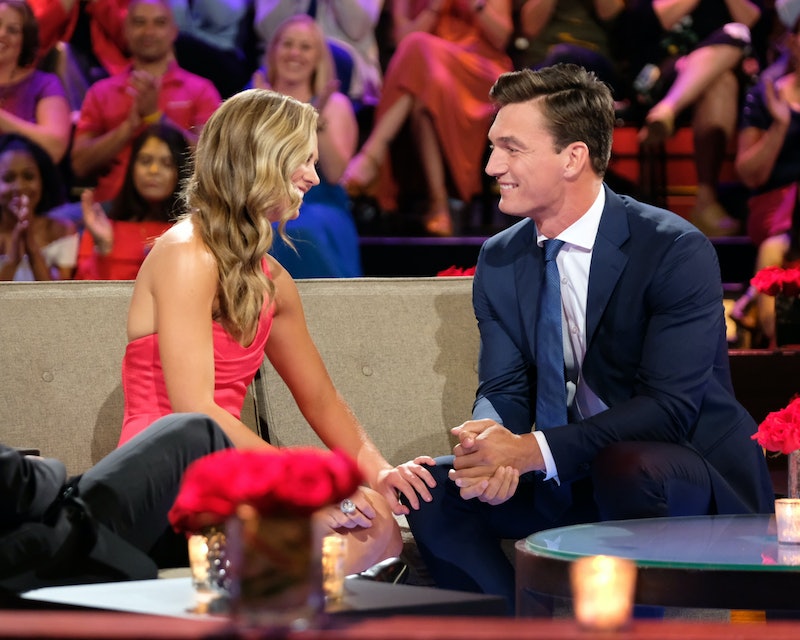 Hannah Brown and Tyler Cameron's relationship may not have worked out on The Bachelorette, but they certainly seem to be getting along quite well while self-quarantining together during the coronavirus outbreak. In fact, during their latest TikTok video, Hannah B. and Tyler C. are shown playing spin the bottle, proving once and for all that — even if they aren't together — they are truly taking great pleasure in teasing fans about the possibility.

This particular video was shot and shared on Monday, March 23, when Tyler, Hannah, and their friends — who have since dubbed themselves as the "Quarantine Crew" — hosted a game night, playing everything from musical chairs to, you guessed it, spin the bottle. "Alright, the moment we've all been waiting for...a little 'spin the bottle' with Hannah Brown!" Tyler is shown saying in the TikTok video. "Alright, here goes nothing."

It's here that the camera focuses on Hannah and Tyler's faces, both eager in anticipation. However, the bottle ultimately lands on one of Tyler's friends, squashing the hopes of major Bachelorette fans and Hannah and Tyler shippers once again. "A little spin the bottle with @hannahkbrown and @brownbearvisuals sadly..." Tyler captioned the video, indicating that viewers were the only ones who were bummed out by the results.

The reality stars initially met during Hannah's season of The Bachelorette, where Tyler came in second. And while they opted to each go their separate ways after filming, they have continued to be in close contact, especially over the last several weeks. Before their time in quarantine began, Hannah had visited Tyler in Florida multiple times after his mother died, which is what originally sparked all of the dating rumors. And now that the two of them are stuck in a house together, spending every single day together, those rumors have only continued to grow — and they are doing very little to debunk those suspicions.

However, according to an E! News insider, their relationship is still purely platonic, at least for now. "There is definite chemistry between Hannah and Tyler, but they are not dating," a source recently told the outlet. "They both have expressed they are not in a position to date right now but do care about each other," the insider claimed. "They have both been through a lot recently and are supporting each other through it."

Though given how much unprecedented time they're now spending together, it's possible Tyler could still end up receiving that final rose after all. And if he does, they'll undoubtedly let us know on TikTok.