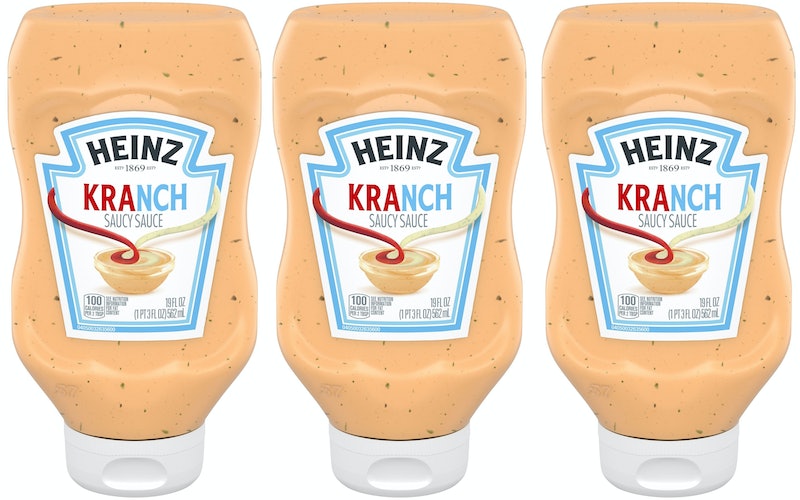 It's safe to say that we all have that one dipping sauce that's our constant go-to, whether it's ketchup, mustard, barbecue sauce, ranch, or another one entirely. I don't know about you, but I love when I'm eating at a restaurant a see a unique sauce on the menu that you can't usually find in stores — what's the harm in finding a new favorite way to enjoy your french fries or other dippable dish? It seems that Heinz understands that people love trying out something fresh, because they've just released a product that's definitely one-of-a-kind: I'd like to formally introduce Heinz's Kranch sauce, a ketchup and ranch combination, which is set to hit shelves in April 2019.

If you love ketchup and you love ranch, what's not to adore about Heinz's latest creation? It seems like one of those things that you've got to try for yourself to see what the hype is all about. The mashup is only the most recent in a line of distinctive condiment combinations. In 2018, the brand released Mayochup (mayonnaise and ketchup), along with Mayomust (mayonnaise and mustard) and Mayocue (mayonnaise, barbecue sauce, and a special blend of spices) earlier in 2019.

Mayocue and Mayomust just started rolling out at major retailers throughout the country this month, while Heinz Kranch sauce is already available online and will be up for grabs in stores nationwide beginning in April 2019 (with a suggested retail price of $3.49). Each of the sauces come in 16.5-ounce squeeze bottles, so you'll have enough to dip and cover to your heart and stomach's delight.

It seems like fans and customers were really adamant about wanting to see some condiment combinations come to life, and Heinz was more than prepared to deliver when they began creating the line of products. “After seeing the unprecedented passion surrounding this product, including the nearly one million votes on social media and 500,000 votes in favor of bringing it stateside, launching Mayochup in the U.S. was a no-brainer,” Heinz's Director of Marketing Nicole Kulwicki stated in a press release when the first hybrid was launched. “We’re excited to officially welcome Heinz Mayochup sauce to the Heinz family of products, including ketchup, mustard, BBQ sauce and our most recent addition, Heinz mayonnaise."

If I had to guess, people are going to be fans of Heinz's Kranch, because mixing ketchup and ranch seems to be a phenomenon that people already enjoy eating.

You may already do this or be shocked that it was even a thing, but it can't hurt to taste test it yourself with Heinz's latest sauce. If you don't like it, there's a pretty high chance one of your friends will dig it a lot. Condiment choice on various foods is definitely a contentious topic — one that's frequently debated in person and on social media — so it'll be interesting to see if the different combinations let people settle their arguments or cause even more conversation. Most of Heinz's combo sauces are already in stores by now, so take the chance to pick up one of your own and see what everyone's talking about.