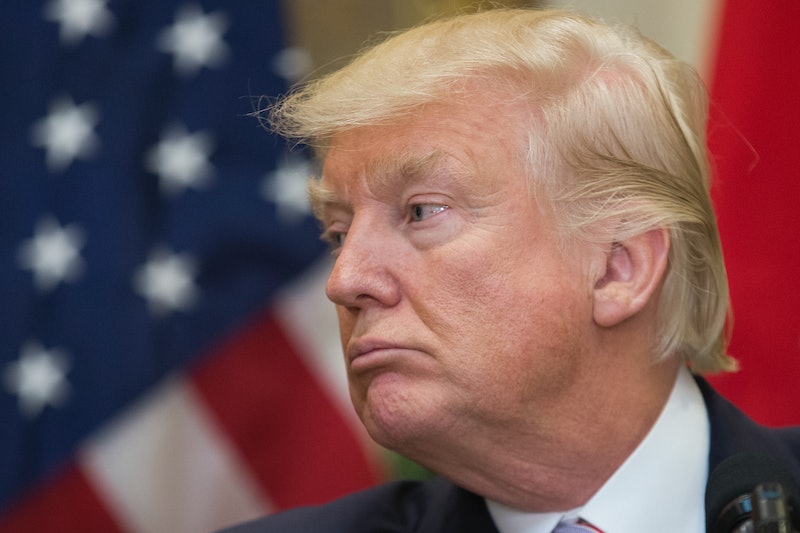 With back-to-back breaking news dropping on both Monday and Tuesday alleging that President Trump shared classified information with Russian diplomats and asked to end investigations into his former National Security Advisor Michael Flynn's ties to Russia (though the White House has denied both allegations0, people are wondering about the possibility of impeachment now more than ever. Since no one likes to sit idly by in the face of national (maybe international) scandal, it's definitely reasonable to start considering what citizens can do to get Trump impeached.

Despite calls from several Democrats to start the process or at least begin examining the situation more critically, impeaching a president — let alone actually removing the president from office — is not an easy task. However, the political future isn't entirely out of concerned constituents' hands either.

There are a few obvious paths that everyday Americans can take to contribute to the long-game of starting the impeachment process (complicated, rare, and Rube Goldberg-esque as it may be). Like so many other problems that have reared their heads since the 2016 election, the best odds involve leg-work: that is, a whole lot of communication with representatives (you literally cannot escape that, nor should you want to) and a whole lot of focus on flipping districts (so, say hello to canvassing).

The former is probably the more immediate fast-action, particularly if you live in a district with a Republican representative (and if you don't, call them either way). Making sure the people elected to serve you know what you're feeling right now is vital. Whether it's through demanding they advocate for a special prosecutor for the investigation into alleged Russia ties or expressing alarm with the past week's news, it's a pretty simple (and effective) move to reach out to your representatives. After all, their political futures depend on the moves they make now.

FYI: You can reach your representative by calling the Congressional switchboard number, (202)-224-3121. Give your address, and you'll be connected with your rep. It's so easy!

Now, there's reason to believe that impeachment isn't likely as long as the Republican majority sees a benefit in protecting Trump. And the GOP has a lot at stake in Trump's presidency succeeding: the future of its conservative policy agenda, the careers of the various politicians who have already fallen on their swords for the president so far, and the Republican Party's credibility in future elections, for example.

Even so, that's as good a reason as any to start focusing on chipping away at that Republican majority and campaign for reps who share your concerns — once you've made all of your calls, of course.