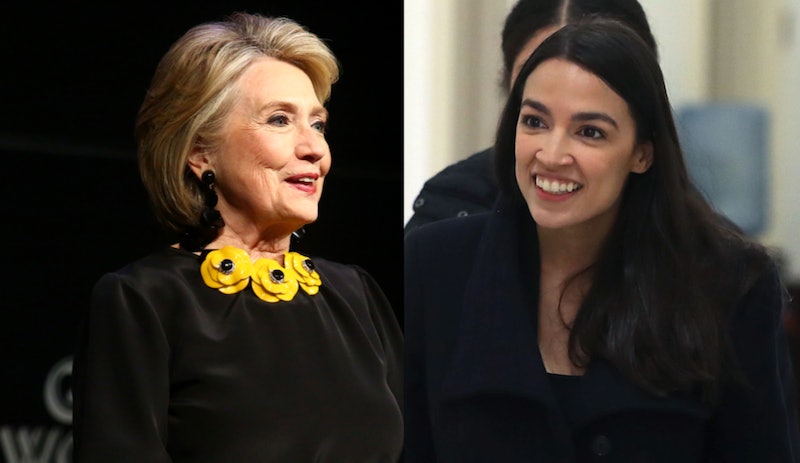 Get ready, because two of the most famous women politicians in the country are now chatting on social media. On Thursday, Hillary Clinton and Alexandria Ocasio-Cortez tweeted at each other about reports that some Trump administration officials have been using improper cybersecurity practices.

"But his WhatsApp," Ocasio-Cortez tweeted on Thursday night, referring to Jared Kushner, who reportedly used WhatsApp to conduct government business and possibly diplomacy. An hour later, Clinton replied directly to her tweet, writing, "Tell me about it." The congresswoman, seemingly as excited by the exchange as everyone else was, replied: "!!!"

Clinton's use of a private email server during her time in government became a major Republican talking point during her 2016 run for president. Analyses have shown that the scandal received far more news coverage than policy issues during the race; then-candidate Donald Trump used the controversy as one argument that his opponent was corrupt.

Of course, Trump's tenure as president has now been plagued by a stream of scandals, including some that seem to involve similar circumstances to Clinton's (the first daughter, for example, has used a private server to send some government emails). Soon after Trump's inauguration, many liberals took up the rallying cry "but her emails!" to describe what they saw as hypocrisy between conservatives' criticism of Clinton and their relative silence toward the Trump administration's own malfeasance.

The "but her emails" refrain came up yet again this week with a letter that Rep. Elijah Cummings (D-Maryland), chair of the House Oversight Committee, sent to the White House. Cummings raised a number of concerns about administration officials' handling of personal messaging and email accounts, including Kushner's use of WhatsApp.

Cummings wrote that Kushner's lawyer had "confirmed" that he had been utilizing the messaging app "as part of his official White House duties to communicate with foreign leaders" but "could not answer whether Mr. Kushner's communications included classified information." The attorney countered later on Thursday that she "did not specify" to Cummings whom Kushner was communicating with.

While WhatsApp is considered to be quite safe for sending messages between private citizens, it's still not the most secure way for a senior government official like Kushner to engage in diplomacy, according to The Washington Post. Those who might seek to compromise Kushner's messages would probably be highly sophisticated actors, The Post reports, and they would be more likely to get to his messages on WhatsApp than his correspondence on the extremely secure White House communications system.

Kushner isn't the only official currently under fire. Per CNN, congressional Democrats are also saying that they've received information that Ivanka Trump has been continuing to conduct government business using her private email account (her lawyer denies this) and that K.T. McFarland and Steve Bannon did the same during their time in the White House, per CNN. Democrats are currently seeking further evidence and have issued many document requests.

"As you know, the White House has not produced a single piece of paper to the Committee in the 116th Congress — in this or any other investigation," Cummings wrote in his Thursday letter. He threatened to issue subpoenas if the White House keeps refusing to cooperate.