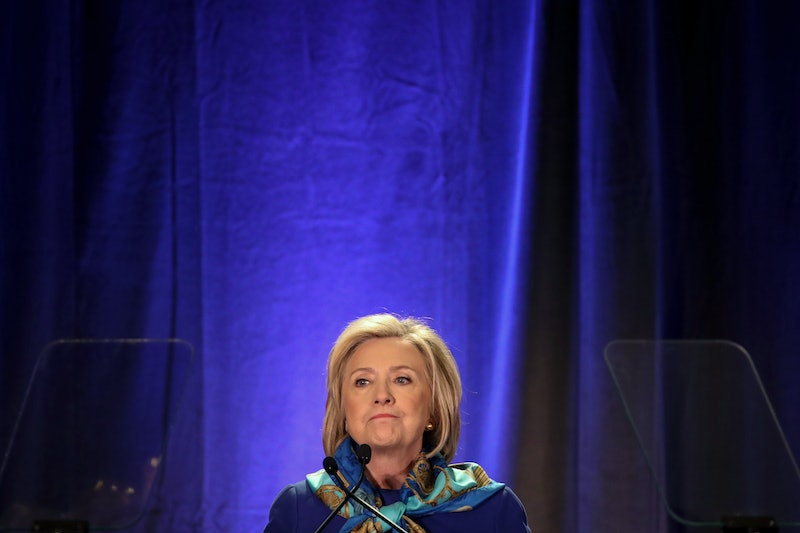 On Tuesday, President Donald Trump announced that he is withdrawing the United States from the Iran nuclear deal, breaking from an agreement designed to limit Iran's nuclear activities. Trump has received extensive criticism for the withdrawal, including from Hillary Clinton, who says that Trump's Iran deal decision makes America less safe. In fact, Clinton started a Twitter thread condemning Trump's decision and highlighting how it may harm the United States and beyond.

Trump announced his decision to withdraw the United States from the deal, which is officially known as the Joint Comprehensive Plan of Action, during an address on Tuesday. In declaring the withdrawal, the president characterized the deal as "defective," saying,

It is clear to me that we cannot prevent an Iranian nuclear bomb under the decaying and rotten structure of the current agreement ... The Iran deal is defective at its core. If we do nothing, we know exactly what will happen.

Many have condemned Trump's decision, including former Secretary of State Clinton. On Twitter on Tuesday evening, she characterized the United States' withdrawal as a "mistake" that would threaten American safety and security. As Clinton wrote:

Pulling out of the Iran nuclear deal is a big mistake. It makes America less safe and less trusted. Iran is now more dangerous. What's plan B? Anyone who thinks bombing is the answer is woefully misinformed ...

Clinton also emphasized that, now that the United States has pulled out of the deal, it will be much more difficult to negotiate with Iran in the future and more challenging to deal with security threats. As Clinton noted, "... It will also be harder to deal with other threats like ballistic missiles and terrorism. Now we have no leverage and Iran is free to do what it wants."

As ABC reported, the Iran nuclear deal was brokered by Iran and the United States, France, China, Russia, Germany, and the United Kingdom back in 2015. The agreement curbed Iran's nuclear program and mandated international inspections to ensure compliance. In exchange, some of the stringent economic sanctions to which Iran had been subject were lifted.

As the BBC reported, while the Iran nuclear deal was not perfect, it appeared to be effective. Iran seemed to be adhering to the terms of the agreement mandating that it limit its nuclear activities. Thus, many of the countries which initially brokered the deal wanted it to stay intact — and had strongly encouraged Trump to remain a part of the agreement.

When Trump ultimately did decide to leave the agreement, the leaders of France, Germany, and the United Kingdom — Emmanuel Macron, Angela Merkel, and Theresa May — released a joint statement expressing their disapproval, saying:

It is with regret and concern that we, the leaders of France, Germany and the United Kingdom, take note of President Trump’s decision to withdraw the United States of America from the Joint Comprehensive Plan of Action [JCPOA] ... Together, we emphasise our continuing commitment to the JCPOA. This agreement remains important for our shared security.

French President Emmanuel Macron also separately tweeted that the United States' withdrawal from the agreement means that the "The nuclear non-proliferation regime is at stake."

Now that the United States has exited the deal, it will reimpose various economic sanctions on Iran following 90-day and 180-day windows. Clearly many people, including former Secretary of State Clinton and various international leaders, are highly concerned about the implications of the United States' withdrawal for both American and global peace and security. As ABC reported, the world is now closely watching to see how Iran responds to Trump's announcement — and to see if and how the deal will remain in place for the foreseeable future.