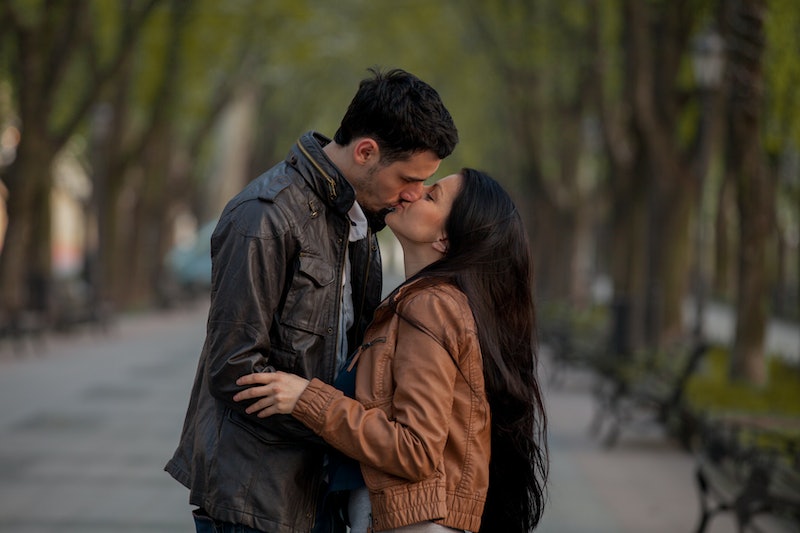 Pluto got kicked out of the solar system in 2006, and though it's been welcomed back into the fold, it is not happy. This itty, bitty dwarf planet goes retrograde once a year, and packs a pretty big astrological punch to most areas of your life. So, just how does Pluto retrograde affect your love life? Pluto is an introspective little bugger, and if you've been in denial about certain aspects of your life Pluto will force you to see them — kind of like a bratty little sister who keeps showing you unflattering pictures of yourself from your home perm phase.

"For example, we’d all like to think we take the higher ground, but we also all have stress, jobs, family, and partners that wear on us," Astro + Tarot magazine noted. And sometimes we make decisions from a place of insecurity, and end up living a life of deceit rather than face the shit storm. Life is not as pretty as we’d like it to be. We don’t want to admit that it’s complicated and messy so we lie: to ourselves, and to others. This is unrefined Pluto energy."

Pluto begins retrograding on Apr. 22 in Capricorn and keeps moonwalking backward until Sept. 30. Here's how this little dwarf planet will shake up your romantic life.

Hidden Truths Will Be Revealed

While having the things you've been trying to look away from thrown in your face sounds pretty unpleasant, Pluto Retrograde offers the opportunity to course correct.

"With Pluto transits, it can feel as if the elephant in the room can no longer be avoided. And if you’re willing to surrender to Pluto’s challenges, you can harness his transformational edge," Astro + Tarot magazine explained. "Pluto protects us, keeps us on our toes, and magnetizes us to objects of desire. And after Pluto has taken you down, down, down, there is an immense potential for personal growth."

I mean, usually when you hit rock bottom the only way to go is up. If you want to get really positive just keep repeating the phrase "every cloud has a silver lining."

Wait, it gets better, err I mean worse. While Pluto retrograde can bring you a whole new life, the process can really suck.

"Change comes with this retrograde by stalemates and clean slates," Serendipity Astrolovers noted. "Change may come in the form of getting fired or getting dumped..."

If you find this happening to you, Serendipity Astrolovers advised that anything taken from you during Pluto Retrograde was most likely going to end anyway, and trying to get it back will be futile.

Up to 40 percent of people have Pluto in their birth chart, and if you're one of them, Astrology King noted that you might have difficulty transforming your life due to fear of letting go.

"Pluto Retrograde in your natal chart subjects you to many fated events which are aimed at bringing your deepest and darkest fears to the surface," explained Astrology King. "A repeating theme of particular experiences will continue until you learn to safely express your inner power and intensity."

If your romantic relationship is starting to feel like the movie Groundhog Day, this is why. "If you have been too smothering and controlling in a relationship, holding on too tight, then you may be forced to let go," advised Astrology King.

The Astrotwins call Pluto Retrograde a time for "spiritual housecleaning." If your relationship is not working, it's time to examine why.

"It’s also an opportunity to deal with that stuff you keep shoving aside, ignoring or glossing over," the Astrotwins noted. "If your own integrity is questionable, use Pluto Retrograde to clean things up. There’s no fudging or excuses now; you don’t want to be at the center of a scandal. Keep your affairs aboveboard."

I know I just hit you with a bunch of heavy stuff; just take it all into consideration as Apr. 22 approaches. If your personal and love life is in an upheaval, it might be time to examine how you got here, and start to plan how to rebuild. Retrogrades don't have to be a bad thing; they're just what you make it.