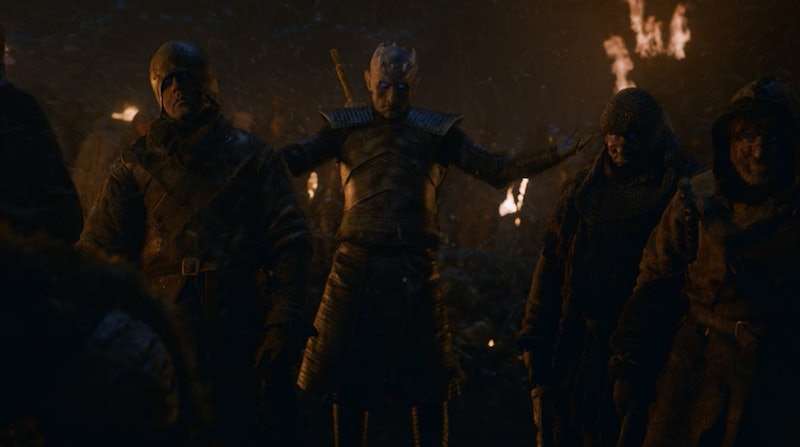 Mondays are difficult. It is known, as the Dothraki would say. But if you’ve noticed that Mondays have been especially difficult since the eighth season of Game Of Thrones started airing, it turns out there’s a reason for that: You might be experiencing the effects of Game Of Thrones-related stress on your sleep. Yes, really — a fictional television show can stress you out enough to cause all sorts of sleep problems, even if you don’t realize said television show is the root of the issue. What a lot of it comes down to is empathic stress — the stress response you experience when you observe someone else under stress — and how that stress can in turn harm your sleep health. In short: Stress is contagious; when you’re stressed, you have trouble sleeping; ergo, your Game Of Thrones obsession might legit be contributing to your exhaustion at work on Monday morning. (Thanks for the 9 p.m. Sunday night airtime, HBO.)

There’s one study in particular that’s worth looking at not only with regards to empathic stress, but specifically with regards to how empathic stress can arise from TV. The study, which was published in the journal Psychoneuroendocrinology in July of 2014, found not only that you don’t have to be in crisis yourself in order to experience a stress response — it’s enough just to watch other people being in crisis — but also that you don’t even have to be in the same physical space as the person in crisis in order to feel stress from watching them struggle. It’s enough just to view them on a video screen.

The study examined what happened to pairs of people when one member of the pair was subject to what’s called the Trier social stress test (TSST), while the other watched. Two types of pairings were used — pairs of complete strangers, and romantic couples who had been involved for at least six months — as well as two viewing methods: The member watching viewed their partner undergoing the test either through a one-way mirror or via a video transmission. (The TSST is a laboratory procedure designed to induce stress; those taking it first make a five-minute presentation — typically framed as a job interview — then perform some mental arithmetic, all before a panel of “judges.”) It was also made clear to the member of the pair watching that they would not be taking the test themselves after their partner was done.

The researchers found that the levels of cortisol, colloquially known as the “stress hormone,” spiked significantly in 26 percent of the observers. The spikes were greatest in the pairs of romantically involved people, as well as when observers viewed their partners through the one-way mirror; however, similar spikes were seen in 10 percent of the pairs who were comprised of strangers, as well as in 24 percent of the observers who watched their partners via a video feed. The results are clear: Watching other people get stressed out also stresses us out, even if we’re watching them on TV.

Now, it’s worth noting that this study focused on the stress responses experienced by people watching someone else on live feed — that is, they weren’t watching something recorded that had already happened; they were watching it unfold in real time. Plus, the people involved were real people, not fictional characters. As such, the most direct, real-life analogue to these laboratory conditions is something more like, say, watching the news than watching a scripted, fictional television show. We’re aware that the vast majority of today’s scripted television shows aren’t broadcast live — and what’s more, we’re generally pretty clear on the fact that the people we’re seeing in them are fictional characters.

At the same time, though, scripted shows like Game Of Thrones demand that viewers to suspend their disbelief in a way that can mimic how we feel watching real, live people. The realities of these shows are constructed such that, to the characters, what’s going on in each is happening in real time — which, in turn, is how we experience what’s going on (unless you’re either re-watching an episode you’ve already seen or you fell prey to the terrible scourge known as spoilers).

What’s more, when it comes to stakes, they don’t get much higher than they are in Game Of Thrones: Individual characters are continuously in danger; both major and minor characters could die — typically horribly — at any moment; and the fate of the entire world is constantly hanging in the balance. Watching so many people going through all of that, episode after episode, it’s no wonder that we experience empathic stress during our weekly viewing parties — even if they’re fictional characters we’re watching on a TV screen.

But the way the show generates stress is still only half the equation. We also have to look at how stress affects your sleep — and thanks to the vast wealth of research that’s been conducted on the subject, it’s pretty easy to see how Game Of Thrones-induced stress could mess with your nightly zzzs.

Stress is, in fact, directly related to how well we sleep. When we’re stressed, our bodies produce elevated levels of cortisol and adrenaline as part of the fight-or-flight response — that is, when we’re under threat, our bodies work to make sure we have what we need to either fight our way out of the situation or run away from it to safety. Both of these substances do a whole lot of things for us that are useful in fight-or-flight situations, such as upping our heart rate and blood pressure, ensuring that we’ve got lots of energy at our disposal; what’s more, they also both make sure we’re wide awake, again so we have what we need to either fight or run.

These days, many of us are lucky enough for the “threats” we experience in our daily lives to be less physical and more mental or emotional — think heavy workloads, relationship problems, that kind of thing. But our bodies still respond to these kinds of threats the same way they would to, say, a bear attack, so… well, you can see how that might an issue, right?

Consider a 2015 study conducted in South Korea and published in the International Journal of Environmental Research and Public Health which looked at the association between sleep duration and perceived stress in salaried workers. Using data from Korea’s Community Health Survey, the researchers found that the workers who had high-stress awareness also tended to sleep five or fewer hours a night — not good news, given that the average adult needs between seven and nine hours of sleep per night in order to function optimally.

The bottom line is that even if we’re stressed for reasons not related to our physical, life-or-death survival, our systems still get flooded with adrenaline and cortisol, which can lead to nights spent lying awake, trying to sleep and failing. And hey, guess what? Watching Game Of Thrones might be one such source of stress.

None of this means you have to stop watching Game Of Thrones, of course — and hey, if you have excellent stress management skills or have the ability to enjoy the show without getting super emotionally invested in the characters’ fates, then maybe none of this is an issue for you in the first place. Either way, though, we’ve only got a few weeks to go before we find out exactly who’s going to finally win the Iron Throne… if anyone.

Strap yourselves in, folks. We’re in the home stretch now.