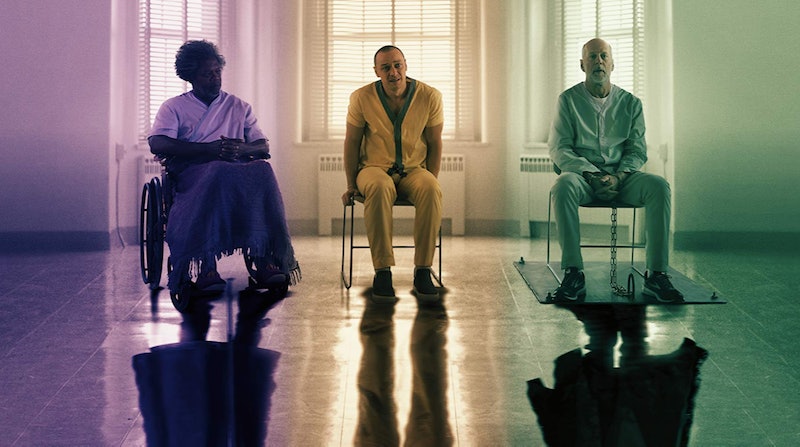 Glass catches up with Unbreakable’s protagonists, Elijah, who now uses the alias Mr. Glass, and David Dunn, who is now known as The Overseer, nearly two decades after their story left off. In 2000's Unbreakable, David comes to terms with having superpowers and decides to become a superhero. But he’s far from being a traditional one. Instead of being a man in tights, he poses as an average guy, fighting crime on his own time.

But the big twist at the end of Unbreakable is that Mr. Glass, who had trained David to embrace his superpowers, just wanted to play the villain to the superhero. And David, who is horrified upon learning of Mr. Glass’ crimes, reports him to the police, causing the villain to be institutionalized. Glass marks the first time the characters meet again onscreen.

And while Unbreakable is about David tapping into his abilities and taking on a new role as a vigilante, Glass puts his abilities, as well as those of Kevin and Mr. Glass, to the test — from a psychological perspective. In an interview with io9, Shyamalan explained the large role that questioning their personas has in the film’s plot.

“I think there’s definitely a philosophical conflict at the center of the movie which is, you know, are they are they deluded to think these things? Or is that belief in oneself ultimately something that truly makes them something more?,” explained the director. “That kind of belief is a tenuous thing for people. Even if we can do extraordinary things, is it something that we’re interpreting when we do that or are some people really special or not? The movie’s really about doubt versus belief and so every scene has that weight to it and that struggle is there.”

And it’s clear that it was very important to Shyamalan to continue the characters’ stories and give fans a glimpse of how much their personas have evolved since they were last seen. The cast appeared on Conan during the summer and Shyamalan expressed how much it meant to reunite the characters nearly 20 years later. “It was strangely emotional,” said the director. “This is the first time that I wrote about characters from a different point in my life. And — I didn’t actually tell you guys this — but when you guys came for the costume test, and we were checking out your outfits, the first time that I saw them on camera, as Mr. Glass and David Dunn after 18 years, I got emotional, the entire crew… some of these guys, they were really young when they were working [on Unbreakable] and everybody got quiet.”

And Shyamalan isn’t the only one who felt it was important to pick this thread back up. In an interview with Empire, the writer/director said that the cast wanted to bring the characters back for a long time, and it took a while because he needed to find a way to perfectly culminate their stories.

“Bruce and Sam have been asking me to consider doing another one for so long. I said, 'I’ll think about it, I’ll think about it.' But you have to start from something you’re inspired by, or an idea. Even a storytelling tone. It can’t be inorganic, saying I want to do it because it’ll be successful. I was overly resistant to it, so when I called Bruce for this one, I said ‘this is what I did. I took the character I wrote that was supposed to be in Unbreakable and I’ve made it as a movie, and I’d love to have you in it at the end.' He said, 'I’m in, I’m in.' He did it as a favor.”

Unbreakable has become a cult classic over the years, as it showed long before the Marvel Cinematic Universe took off that superhero flicks can be character-driven and don’t have to fit a certain mold. And Glass echoes that sentiment, showing the complexities of being super while existing in a very realistic world.

More like this
A New Scooby-Doo Movie Confirmed Velma Is Gay & Twitter Is Pumped
By Radhika Menon
Everything You Need To Know About ‘Black Panther: Wakanda Forever’
By Bustle Editors
The 50 Most Powerful Characters In The Marvel Universe, Ranked
By Johnny Brayson and Nola Pfau
Lin-Manuel Miranda & Tituss Burgess React To 'Little Mermaid' Casting Backlash
By Radhika Menon
Get Even More From Bustle — Sign Up For The Newsletter