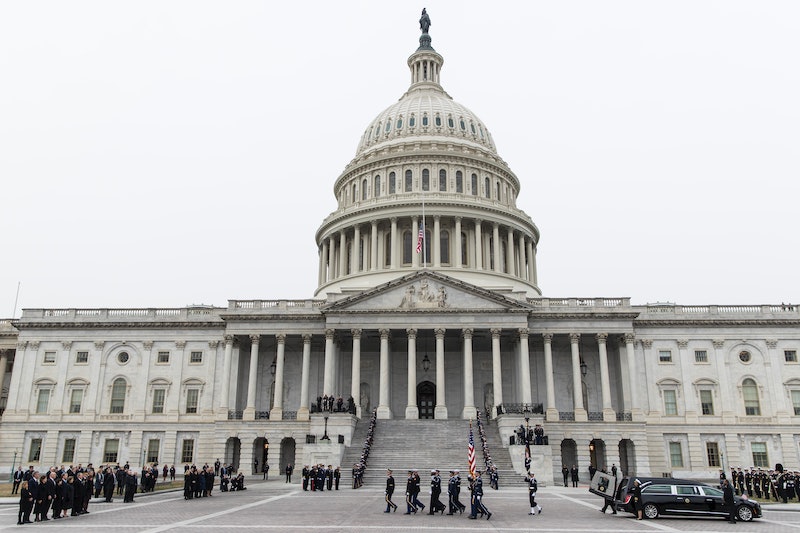 The days until the government could shut down are dwindling, assuming POTUS and Democratic leaders can't come to an agreement about border wall funding by Dec. 21. The notion of a government literally shutting down can seem kind of intangible, since it's such a monumental yet simultaneously vague situation for regular citizens to understand. For those who are wondering how long a government shutdown can last, the answer is that there really isn't a limit to the length of a shutdown.

Specifically, because of the Congressional Budget Act of 1974, all government agencies must have an approved budget by Congress in order to function. As a result, partial and full government shutdowns always last until a spending bill is agreed upon in Congress.

In the case of this impending partial shutdown, 75 percent of government spending was already approved in October, according to the Associated Press. So this would be a partial shutdown for the remaining 25 percent, the publication explains, including the departments of Homeland Security, Transportation, Interior, Agriculture, State and Justice.

There have been 20 government shutdowns in American history, according to Vox, and of those shutdowns, some have been as short as an afternoon, while the longest (in 1996, under Bill Clinton) took an astounding 21 days.

But there is one important factor in a government shutdown that certainly incentivizes politicians to come to a compromise, and quickly: the United States loses a lot of money every time the government shuts down.

For example, in 2013 when the government shut down for 16 days, there was an estimated loss of $2 billion in revenue, according to BBC, because workers were still earning their salaries without actually being able to go to work and be productive. And since 800,000 federal workers would have their jobs disrupted by this government shutdown, according to an estimate by The Associated Press, it could turn out to be a hefty financial loss for the nation, depending on how quickly a compromise could be reached.

As NPR explains, the impact of a government shutdown (even a partial one) are far-reaching, and would be felt almost immediately by some citizens. For example, visitor centers at National Parks likely won't be open, the publication notes, though the parks themselves likely will be. What's more, NPR further clarifies that any federal workers who are furloughed (meaning that they still receive pay but aren't actually working) will not actually receive any paychecks until after the government shutdown ends.

For now, both POTUS and Democratic leaders have remained steadfast on their border wall positions, though The Washington Post reports that some Republican leaders are urging Trump to consider a compromise. The Washington Post details a Monday evening meeting with Republican senators regarding the looming shutdown, in which Sen. John Cornyn said to reporters immediately after, "If there is [a plan to avoid the shutdown], I’m not aware of it.”

Meanwhile, Sen. Chuck Schumer said to NBC's Meet the Press on Sunday evening, “We should not let a temper tantrum, threats, push us in the direction of doing something even our Republicans colleagues know is wrong."