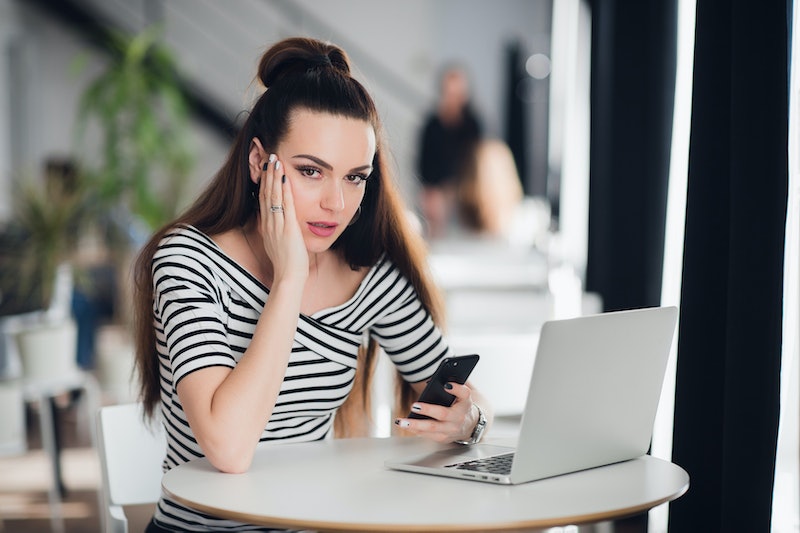 If you're not yet familiar with this nautical term, submarining is a new dating trend where someone you've been seeing, talking to, or even seriously dating suddenly disappears from your radar and then "resurfaces" (a la the trend's namesake) months later with no explanation whatsoever. Instead of offering an apology, the submariner will pretend nothing happened and attempt to pick up where things left off or ~casually chat~ while ignoring the rather large elephant in the room. Needless to say, it's incredibly rude, selfish behavior that leaves the person being submarined hurt, confused, and (hopefully) angry.

"Disappearing from someone's life and then reappearing without apology is a horrible way to treat anyone — especially a romantic partner," Jill Whitney, LMFT and owner of KeepTheTalkGoing.com, a blog dedicated to helping people improve communication about relationships and intimacy, tells Bustle. "It's selfish in the extreme to take off for your own reasons without considering the effect that has on your partner. He or she is confused, hurt, and worried that something happened to you. He or she spends hours analyzing what might have gone wrong."

As someone who's experienced this many times over the course of my dating career, I can personally attest to how much it sucks: it's bad enough to be left without closure when someone disappears on you, but when you add in the extra layer of confusion and hurt when they then pop back up without saying sorry, it can really take a toll on you. But if submarining is so crappy, why do people do it in the first place?

"I suspect people disappear without warning because they want to avoid the awkwardness of actually ending the relationship," Whitney says. "It's bad enough to break up with someone by text, but if someone can't muster the guts to do even that...what a selfish wimp. Or, they may see someone 'better' on the horizon, but they want to keep their options open with you."

Why Does Submarining Hurt So Much?

To the submariner, disappearing might seem like the "easy way out," but it's super insensitive and unfair to the other person to totally ghost them just to avoid the awkwardness of a breakup — and reaching out later, when it's convenient for you, without addressing your crappy exit months prior... that makes it even worse.

"Being left hurts, but it's nothing like the hurt of being abandoned without explanation."

"Most people who experience this kind of abandonment go through months of emotional turmoil trying to sort things out," Whitney says. "It sucks. Meanwhile the submariner is happily off doing whatever, until it suits him or her to pop back up again. Of course, people are entitled to leave relationships or say they want a break. They just need to [toughen] up and say that's what they're doing. Being left hurts, but it's nothing like the hurt of being abandoned without explanation."

What To Say To Someone Who Submarines You

If you find yourself the victim of submarining, you'll probably be tempted to call your ex out for their selfishness — but raging and storming at them likely won't have much of an effect on them, even though it might make you feel better.

"If someone is so callous that they'd submarine in the first place, nothing you can say is going to make them see the light and treat you well," Whitney says. "You can express your feelings, including your anger at being treated so horribly... It may feel very satisfying to let all that out. Unfortunately, though, it likely won't make much impact."

"If someone is so callous that they'd submarine in the first place, nothing you can say is going to make them see the light and treat you well."

For anyone who'd rather not take the burning-bridges route, you can opt for the calm, mature version of calling them out: try having an honest, constructive conversation with the submariner about how their behavior (both dis- and reappearing) made you feel.

"Ask questions that put your ex on the spot," Whitney says. "Try to be really curious and stay calm. Reflect back what you hear. 'So, you wanted a break, but you didn't want to deal with seeing me hurt, so you decided to hurt me worse and stress me out for months? And that was fine because it saved you a few minutes of discomfort?' Your goal isn't to learn about your ex — it's already clear that he or she doesn't deserve you. What you might achieve is actually getting the person to think a little about their behavior so he or she won't do it to the next person."

Should You Take Back A Submariner?

If you're able to have a real, mature conversation with your ex after they pop back up in your life and they (eventually) issue a genuine apology, then *maybe* it's worth giving them another shot. But in general, someone who pulls this kind of immature, selfish move is probably not someone who respects your feelings and your time — which is not what you want in a partner.

"Your ex has good [qualities]; there's a reason you were together in the first place," Whitney says. "But this person does not offer the most essential things in any relationship: honesty, reliability, and respect. Without those, every other positive is worthless. Run. Don't even try to be friends with your ex; who wants a friend who treats people that way?"

If you know you're not interested in reconnecting, you might feel pressured to just "let it slide" — whether it's because part of you still likes them or because you're simply too timid to stand up for yourself — but letting someone get away with being rude, disrespectful, and selfish will only exacerbate the problem.

"The only way awful behavior like submarining will stop is if people get called out for doing it," Whitney says. "Don't tolerate it from your lovers; don't look the other way if your friends do it. If someone in your social circle ghosts or submarines anyone, consider distancing yourself. Life is too short to hang around with people who treat other people as if they're disposable."

So next time you spot a submarine on your radar, don't be afraid to make things uncomfortable and talk to them about their behavior — the worst that can happen is that they'll sink out of sight once again... and TBH, you'll be better off for it.