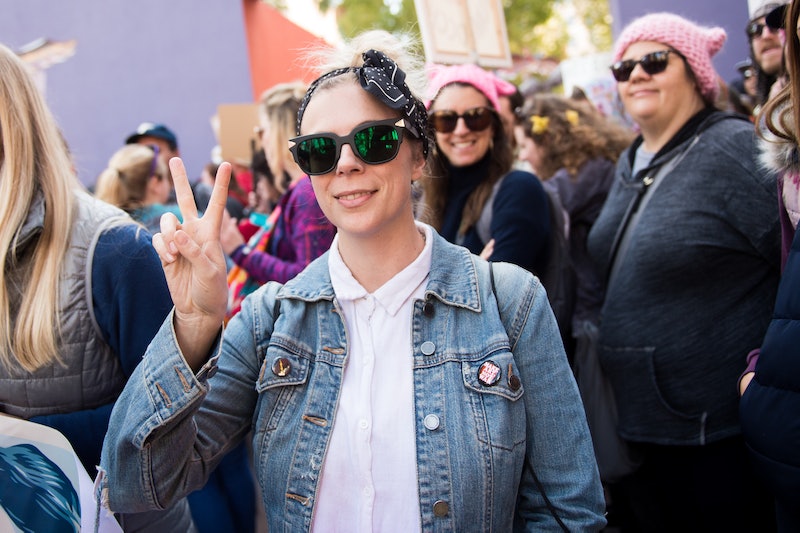 By March 8, when the "A Day Without A Woman" strike goes down, it will have been roughly 6 weeks since the women's marches that followed Donald Trump's inauguration as president. In that time, countless thinkpieces and Twitter threads have been penned both praising and criticizing diversity at the nationwide network of marches; going into the March 8 strike, there will be some serious reckoning of white feminist tendencies. This time around, protesters of all walks of life will need to know how to acknowledge your privilege during the Women's Strike to avoid the mistakes of the women's marches.

From the indigenous women who were reportedly treated like a spectacle by white women in Washington who unduly commented on their native garb, to the amazingly spare police presence during the entire event, privileges across racial lines were on display during the massively-attended protest. While some complained that discussions of race, sexuality, ethnicity, and other oppressed identity factors during the women's march were divisive, it's important for women and their allies to recognize that "woman" is a category that encompasses so many different types of people with vastly different lived experiences, privileges, and oppressions.

Women, and especially trans women, women of color, disabled women, and poor women, deserve so much better than false allyship, and there are a number of ways you can acknowledge your privilege to ensure that they get it.

While it's easy enough to simply state "I have white privilege," it doesn't do much if you don't understand the intricate ways in which your privileges benefit you unfairly. One simple and effective technique for outlining the specific privileges you hold is by "unpacking the invisible knapsack." Developed by Wellesley professor Peggy McIntosh in the late '80s, the "invisible knapsack" is the arsenal of privileges white people carry with them without realizing just how much they benefit from their skin color.

McIntosh's list of privileges ranges from observations that she is "never asked to speak for all the people of [her] racial group" to the staunch reality that she does not "have to educate my children to be aware of systemic racism for their own daily physical protection." Dependent on your economic background, gender identity, or sexuality, your list might look different, but most white people share a common set of normally unacknowledged and unchallenged privileges. Listing them is a good first step in recognizing just how unjust systemic oppression really is. History has taught us that it's impossible to create a successful women's movement without women of color, and now is not the time to feign colorblindness.

Understand That There Is No Singular "POC" Experience

Among my Muslim and Arab communities, and many other POC groups that aren't Black, the issue of anti-Black racism continues to plague us and ultimately bars us from addressing our shared oppression as victims of racial discrimination.

While it can be difficult to parse out the differences in our privileges and oppression when many white-dominated social justice circles tend to lump all non-white people together under the "POC" label, it's important for non-white people of all races and ethnicities to understand that we are not only different from each other, but that we are all far from immune to racism. White women participating in this strike must do the hard work of acknowledging their privilege so as to support their WOC allies, but that doesn't mean POC get a pass on working for each other either.

Remember That Not All Women Have Vaginas, And Not All People With Vaginas Are Women

With the renewed vulnerability of trans kids making headlines and the targeting of trans women of color continuing its bloody rampage into 2017, now is not the time for the vagina-centricness of the women's march. While President Trump's attacks on women were based on objectification of cis women's genitalia, that doesn't mean we have to categorize our womanhood based on what we have in our pants. To center the female resistance to Trump on vaginas not only does a disservice to us as women — it also reinforces the transphobic idea that vagina equals woman, which erases the existence and identities of trans women and trans men.

There's no doubt that the "pussy"-centric signs and chants of the Jan. 21 women's marches privileged cis women over trans people, and that feminist circles as a whole privilege cis women. Recognizing that your cisgender identity privileged you in the women's marches (and in general) doesn't mean you can't celebrate your vagina or all the amazing things it can do — it's merely a recognition that trans people, who are under attack by the Trump regime, shouldn't be excluded based on their genitalia. Women are so much more than vaginas, and the women's strike needn't be based on genitalia the way the marches were.

Know That Some People Can't Afford To Strike

As with the "Day Without Immigrants" strike, one of the biggest and most important privileges to recognize is the ability to strike without losing your job, or that if you do get fired for striking, it won't put your livelihood and that of your family in danger. This one's personal for me — as a first-generation immigrant and working-class person, I could not afford to strike on the "Day Without Immigrants," and haven't yet decided if I can financially afford to strike on March 8. I'm luckily privileged enough currently to know that the loss of wages on that day would not result in my lights being turned off or a cut in my grocery budget for the week, but my family has been in such dire situations in the past.

The unfortunate fact of the suddenness of the protests against Trump following his election, inauguration, and disastrous first month as president means that many people have simply not had the time to work extra or save up enough money to compensate for the lost wages on strike days.

If the thought of needing to prepare financially for what you lose by striking on March 8 never occurred to you, you likely need to reckon your class privilege within your feminism. By all means, please join the women's strike. But please know that some people, including those around you who (like me) may not "look" poor, might not be able to afford to join you.

The "Day Without Women" is an incredibly important strike, and one that could hurt Trump and his ilk where it counts to them — in their wallets. But we must work extra hard to avoid the privileged mishaps of the women's marches so as to create a movement that isn't just inclusive of women from all walks of life, but that also makes sure that the rights of all women are achieved.