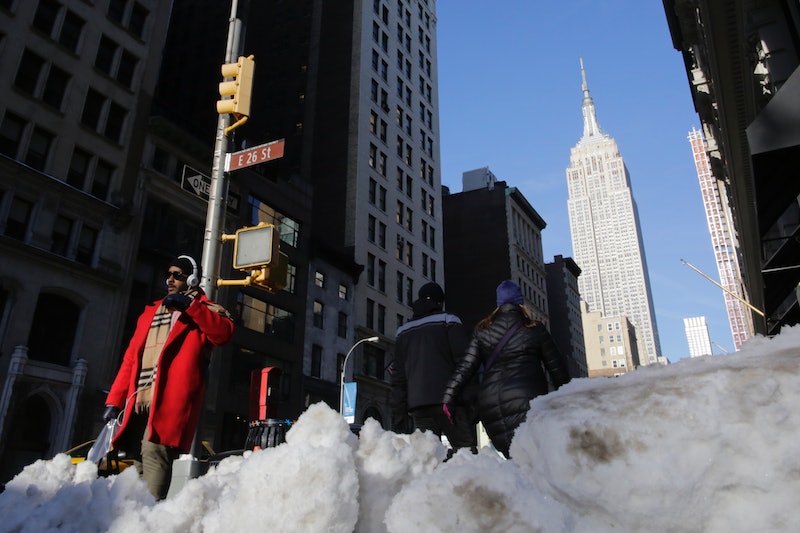 An intense winter storm is rapidly approaching the Northeastern United States. If you live in or are traveling to the region, you're probably wondering how to track Winter Storm Quinn — and what path meteorologists are predicting for the storm. While there is not one "best" way to track the storm, following the Weather Channel for live updates as well as checking out social media and television coverage from local weather services constitute some of the most useful ways to keep-up-date on the storm's track.

Winter Storm Quinn is expected to profoundly affect parts of the Northeast, with some major cities, including Philadelphia, Boston, and New York, expecting up to a foot of snow. The Weather Channel has been rigorously tracking the storm and has been offering frequent updates, including a live radar, on this webpage. The radar enables you to see the storm's current path and weather conditions. The page is also regularly updated with a "happening now" section, which describes current weather conditions in various states as a result of the storm.

According to the Weather Channel, determining the path of the storm and resultant snowfall is still a bit challenging. As the outlet described, "the jet stream energy from Quinn will trigger the development of an intensifying area of low pressure into Wednesday ... The exact track of that low is still a tad uncertain and is making the snowfall forecasts for parts of the Interstate 95 corridor quite tricky."

The Weather Channel also reported that the National Weather Service has issued winter storm warnings for a spate of localities that could stand to be affected by Quinn. According to its website, the warnings apply to areas from "eastern Pennsylvania and northern New Jersey to central and eastern New York and much of New England. This includes Philadelphia, New York City, Hartford, Albany, Portland and much of the Boston metro area."

In addition to tracking the storm via the Weather Channel, you can also use social media to find out more information about the storm's potential path. You can use Twitter to find the local National Weather Service (NWS) account for your area, which will likely post frequent updates about the storm, including its potential path and impact on your area. For example, the National Weather Service Eastern Region's Twitter account can be found here and the National Weather Service New York, NY's account is located here. Moreover, you can also check the websites and Twitter accounts of your local news outlets and meteorologists for further information on the storm's effects in your area.

Many states and cities are already taking preemptive action to prepare for the expected ramifications of the storm. For example, New York's Governor, Andrew Cuomo, warned New Yorkers to be prepared for massive impacts on transit due to the storm:

If you are located in the Northeast, it is useful to utilize the aforementioned options to both track the storm as well as to determine any safety precautions you may need to take due to the storm. The most severe weather from the storm is expected to occur on Wednesday and Thursday — and residents in affected areas are advised to be on alert for updates and changes to storm conditions.