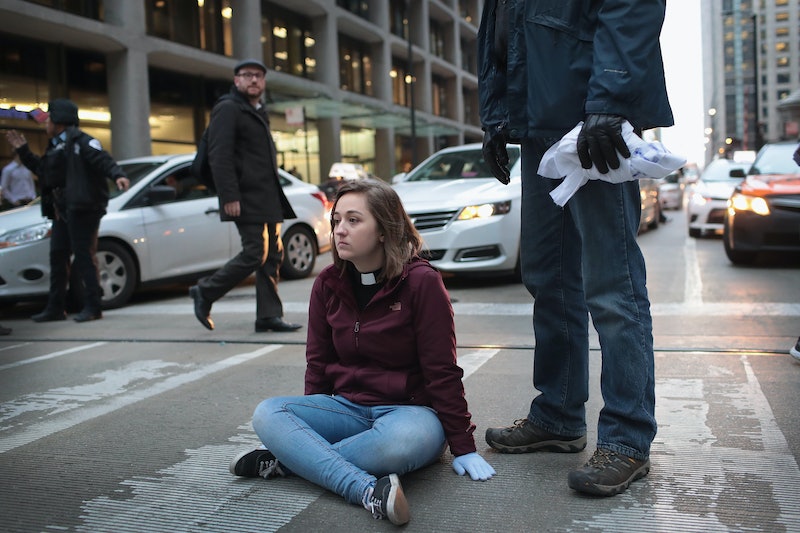 You awake feeling panicked. You attempt to calm down by looking at the news, in the hope that something sane has happened, something rational and irrefutably good, that you can cling to. It has not. You do not calm down.

You experience the constant, deeply desirable sensation that this is a hallucination, that the country did in fact choose Hillary Clinton in November and that you are currently existing in a waking dream populated by pussy hats and neo-Nazism while the real world quietly moves forward. You know this is delusional, and yet you find the feeling comforting.

You have to actively force yourself to look at the news. Could it be worse? It could. You need to lie on the floor to recover from each assault of new idiocy and erosion of democratic processes. Steve Bannon on the National Security Council? People disobeying court orders about immigration? You now spend most of your time on the floor, or wishing you were on it, with a duvet over your head.

Your attempts to be an engaged and enraged citizen battle constantly with your body's attempt at self-preservation. You are exhausted to the bone. Every attempt to mitigate the problem by, say, taking ten minutes to look at videos of dogs (they are so good! They have such fluffy tummies! We don't deserve them!) raises the sense of panic, as within that ten minutes something else could have gone wrong or erupted and you need to know about it. The dogs are hastily put away. They look at you mournfully.

Red baseball caps of any kind elicit a visceral response, as do hand-knitted pink hats, and building sites involving the erection of walls.

Twitter begins to make your heart race until it hurts your ribs. Your eyes prickle. You stay away from stores with CNN or FOX on their TVs because you vaguely fear you'll break down in the middle of the toilet paper aisle and become a screaming mess, and the police will likely not accept that your diagnosis is acute anxiety and depression brought on by high levels of environmental stress, and will instead ask you not to crack up in public places.

Your body starts to run away from you, which is particularly problematic considering that your insurance is under threat. You can't sleep properly, and start to forget things (where the keys are, your appointments, where you put all your I'm With Her swag in disappointment in November). Your fight-or-flight response starts to flare at the merest flash of perma-tanned face on a screen or the mention of the word "fascism" in casual conversation. You feel rather like a gazelle living on adrenalin on the savannah. David Attenborough documentaries take on a new advisory capacity.

You experience a bunch of extreme new emotions you weren't aware existed. Weltschmerz, a state of deep melancholy at the state of the world, is one of them. A ricocheting ping-pong between weeping anger, hopelessness, and buoying cheer at protests or ACLU lawyers or Justin Trudeau being excellent, is another. The lack of permanence makes you dizzy and upset.

Previously benign parts of your life begin to take on the sheen of political stress. Taxis remind you of Uber, and the taxi strike crisis. The sight of pregnant women makes you terrified for Planned Parenthood. Red baseball caps of any kind elicit a visceral response, as do hand-knitted pink hats, and building sites involving the erection of walls. Google makes you think of Sergey Brin's immigration status. Getting coffee at Starbucks prompts the memory of their refugee hiring commitment. Everything personal is political.

You feel your attention pulled fifteen ways at once. You must know and understand constitutional law about immigration, the impacts of the global gag rule, the construction of the National Security Council, habeas corpus, the history of fascism, and what the hell Kellyanne Conway is doing this time. You feel as if you can't fully absorb any of it, and that you're basically Sisyphus rolling a rock up a hill made out of endless data feeds.

You experience depressive periods of apathy and sadness so deep you want to crawl into them and not come out. You wonder if waging psychological war against people, so that they're eventually too miserable and stressed to come outside and protest, has been done before on such a rampant scale. Is social media making it worse, or better? You'd investigate, but you feel as if you're in a cave at the bottom of the sea.

You spend your therapy sessions raging at Donald Trump and abortion gag laws. They consume you as much as personal problems, and likely seem far more important, or intertwined with them. Your therapist is likely pretty used to this, considering the current state of things. Your loved ones start trying to hide newspapers from you. You see your partner standing by the WiFi hub, guiltily, alleging that it's been disconnected all night and that she'll call the provider in the morning.

You become withdrawn and irritable, and start looking for something, anything, to make things seem a bit less abysmal. Bingeing on eccentric British murder mysteries. Attempting to make a complicated soup. Fan fiction. Whisky. All of the above, in a terrible cycle, after which you wake up and check the news again.

You close your eyes and try to think of the ocean. Unfortunately, the ocean is filled with boats of refugees, and sea levels are rising.

More like this
It's Hot When People Can Do Mental Math
By Sarah Berman
'Shadow And Bone' Season 2 Pics Show Mal & Alina Starting A New Journey
By Bustle and Bustle UK
Harry & Meghan's Body Language Shows They Are “Crazy About Each Other”
By Radhika Menon
Everything To Know About 'Money Heist: Korea' Part 3
By Gretchen Smail
Get Even More From Bustle — Sign Up For The Newsletter