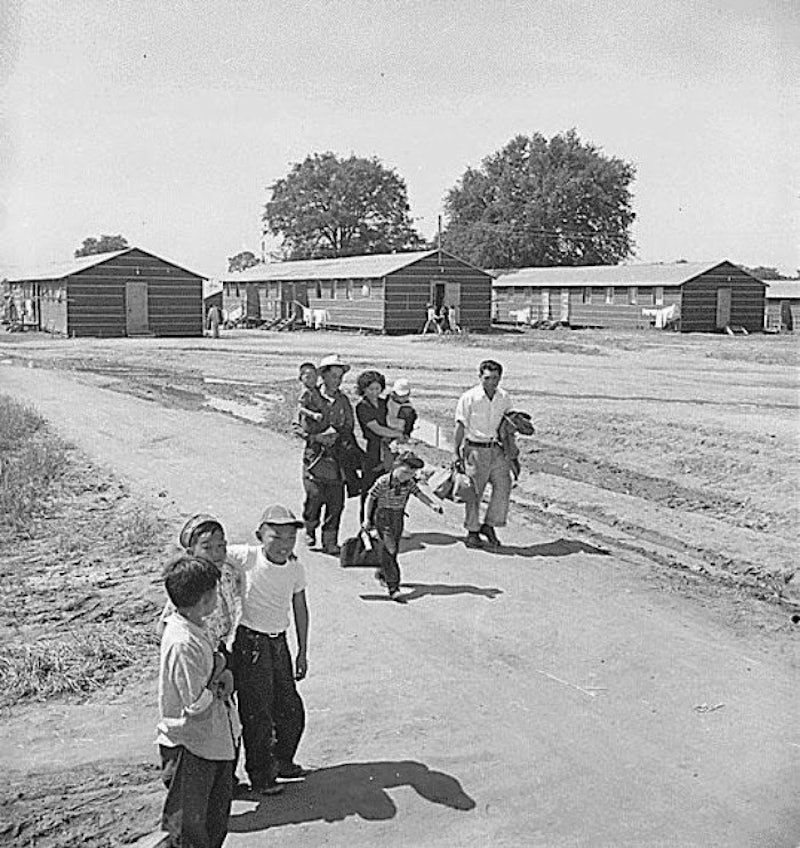 The backyard of my childhood home abuts a major, inter-county road, not far from the largest train yard on the west coast. But if you head the opposite direction on this road, you will see a large, fenced-in field. Most people drive by without noticing it. And if they do look, the main thing they’d probably notice is a large red antenna dish, spinning slowly and silently in the middle. Just outside of those perpetually-locked gates, there’s a reddish-brown sign. “Camp Kohler,” it reads. “Gate 201.”

On February 19, 1942, President Roosevelt signed Executive Order 9066, which set in motion the incarceration of nearly 120,000 Japanese-Americans at a number of internment camps located on the west coast.

For 52 days in the spring of 1942, Camp Kohler was a Japanese-American “assembly center.” It was one of 10 in the state, and this one operated as an emergency holding facility for detainees from Sacramento and San Joaquin counties, while they waited to be transferred to a more permanent internment camp, like Manzanar.

During those two months, Camp Kohler (also known as the Sacramento Assembly Center) held a total of 4,770 American citizens who happened to be of Japanese descent. Aerial photographs taken at the time show there were more than 225 buildings on the site, with one block likely used solely by the military police and camp administration.

After the war was over, returning Japanese-Americans often had nowhere to return to, thanks to discriminatory legislation that barred them from owning homes. A few hundred families made a temporary home at Camp Kohler, which was by then an Army Signal Corps training center. Much of the camp was eventually destroyed by a devastating fire in 1947. Today, it is surrounded by houses and apartment complexes, my old high school, a park, and bisected by a major overpass.

Before I go any further, I’d like to put it on the record that I have no Japanese or Asian ancestry. (I am as English as English gets.) I have no grounds upon which to tell the story of how interment personally affected the Japanese population of Sacramento and its surrounding communities, and will not attempt to try. It is not my story to tell.

The story I would like to tell is that of reluctant witness to a disappearing history. As a child, being told about Camp Kohler, it seemed like any other hyper-local rumor: something my mother half-mentioned to me, and that I then excitedly told my friends about at school. “Can you believe that?!” I’d ask, relishing my knowledge about something only I seemed to know. These conversations were, at best, more about me being a know-it-all child than the honest sharing of our neighborhood's history.

Some of my classmates didn’t believe me. Others had never noticed the field. Others lived near it but didn’t understand why it was fenced off, or didn’t seem to care, or had maybe once sneaked in to ride their dirt bikes around — but otherwise gave it little thought. When we learned about Executive Order 9066 in our classrooms, I raised my hand and told people about it. I don’t remember a single person, teachers included, who already knew about Camp Kohler.

As I got older, and realized that even the adults in my life hardly knew about Sacramento’s shameful connection to the internment of Japanese-Americans during WWII, I began to understand just how quickly history can be lost. I wanted to make sure people knew what that field was, and the conversations I had about it became honest and open about what that history meant to us as Californians.

I’m thankful to say that in recent months, the California History Museum, also here in Sacramento, has made a concerted effort to counter this lack of knowledge. Their new exhibit, “Uprooted! Japanese Americans During WWII” recognizes our local and state history for what truly happened, told by those who lived it, and honors the Japanese-American citizens who fought for decades — even into modern day — against discrimination and shame, and for redress.

For the next few months, students in our city will be able to visit the exhibit and get a tour from someone who actually experienced internment. I wish that when I was a child growing up here, my classmates and I could have had the same lesson. I think it would have helped us better understand what happened in our own neighborhood, to our own friends’ families.

As I said, Camp Kohler is not a part of my personal history, nor is it a part of my family’s. But it is a part of my neighborhood’s history, and I’m sorry beyond words to see that it has become a rusty, empty field with no recognition about what happened there. (Apparently, on the outskirts of the property, there is a playground where a small, historical marker can be found. It is the only hint of what once happened there.) The neighborhood needs to know what this piece of land was a mere 75 years ago. We all need to understand and honor what it means, because it’s so much more than an empty field to drive by.

In Germany, former concentration camps operated during the Holocaust are historical sites, horrific monuments to the terror that mankind can inflict upon those they deem “other.” The Germans do not shy away from their past. They stand in the face of it, as if to collectively say “We see this, we remember this, and we will not let it happen again.”

But on the west coast, you’d be hard-pressed to find too many people who can tell you much about Japanese-American internment camps. Maybe a few will know of Manzanar. (Fewer will know how to even spell it.) I bring this up today because I’m afraid that by forgetting what the United States did to Japanese-Americans during WWII, our country might repeat it again with our Mexican or Muslim residents in the 21st century. And that is unacceptable.

Philosopher George Santayana famously said, "Those who cannot remember the past are condemned to repeat it." I know this to be true, because this history is literally in my backyard.

On Sunday, February 19, I will drive by Camp Kohler. And for the first time in my life, I will get out of my car and walk up to the sign. I might even look for a hole in the fence and sneak in. But regardless of how close I can get, I will stand on that ground and I will remember what happened there. And I will do everything I can to make sure it never, ever happens in my neighborhood, or my country, ever again.