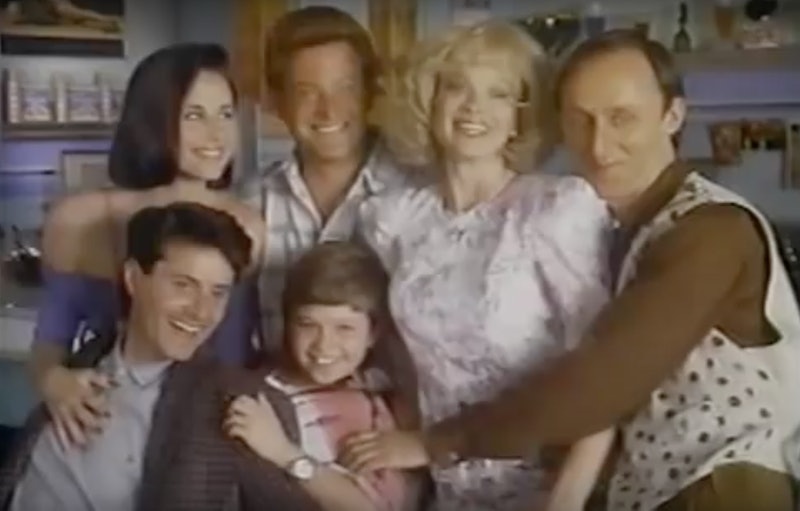 Riverdale might be a bold take on the classic Archie comics characters that have been around for decades, but it's not the first time that these characters have been brought to the big screen. Sure, Sabrina the Teenage Witch and Josie and the Pussycats have been adapted before, but there's a TV movie out there that imagines our teen favorites at their 15 year reunion. Archie: To Riverdale and Back Again shows us what your fave Riverdale characters looked like in the '90s — and oh my, it is something else.

First of all, stop everything you're doing and watch the TV movie trailer. The movie came out in 1990, and was released on video with the equally dramatic but less Tolkien-esque title Archie: Return To Riverdale. It starred television actors like Christopher Rich as Archie, Lauren Holly as Betty, Karin Kopins as Veronica, and Sam Whipple as Jughead.

Then watch this clip (at 3:15) from the movie in which the gang takes to the stage (no surprises there) and performs a song called "Jingle Jangle" — that's right, just like the Riverdale drug name. The movie is just as campy as the current CW series is, just with the added benefit of some wholesome late 20th century charm.

Not only are the characters envisioned with some amazing early '90s fashion choices, but the perpetual teens are supposed to be grown-ups. Here's what the crew looked like back then.

Still best friends and different as can be, Betty is now a teacher in town as well as a writer — and while Veronica has some more risqué ensembles in the tailer, this is a look and a half. Honestly, don't show this to the Riverdale Veronica, because she might try to bring back shoulder pads.

Archie is engaged to a woman who is neither Betty nor Veronica — and that totally checks out, as he still appears to be in love with both of them. How many women is enough, Andrews? Will you ever be satisfied?

"Break it down, won't you please?" The most befuddling page-to-screen transformation has got to be Cool Dad Jughead. At least he's streets ahead of the curve, rapping to "Sugar Sugar" to bond with his kid.

He's not that different, honestly, but the diner/chocolate shoppe doesn't quite have that "Rio de Janeiro" Instagram story filter aesthetic that we're used to on Riverdale. It's a lot more... "Rise" filter.

Archie's cool guy friend is not a major player on Riverdale, but he's somehow both the bass player and the villain in this movie. Why not? He's the one trying to buy out Pop, not Lodge Industries — and speaking of...

Even Veronica's father was in this '90s adaptation, and while he probably doesn't pepper every daughter doting sentence with "mija," he's just as moustache-twirly. In every universe, Hiram's up to no good.

According to IMDb, other Archie comics characters in the movie include Miss Grundy, Ethel, Moose and Midge, Smithers, and Coach Clayton. Unfortunately, there is no Cheryl Blossom in the mix. But, she probably invented '90s "girl power" and would have totally stolen the spotlight.

Would you watch a full series with this cast and these vibes? Better yet, would you watch a Riverdale remake of this trailer? Because based on the way the show has played around with the vintage looks from the original comics, that can likely be arranged. It's nice to know that no matter the decade, there's a certain flair that Archie comics always has — a flair for the dramatic in a bonkers town.