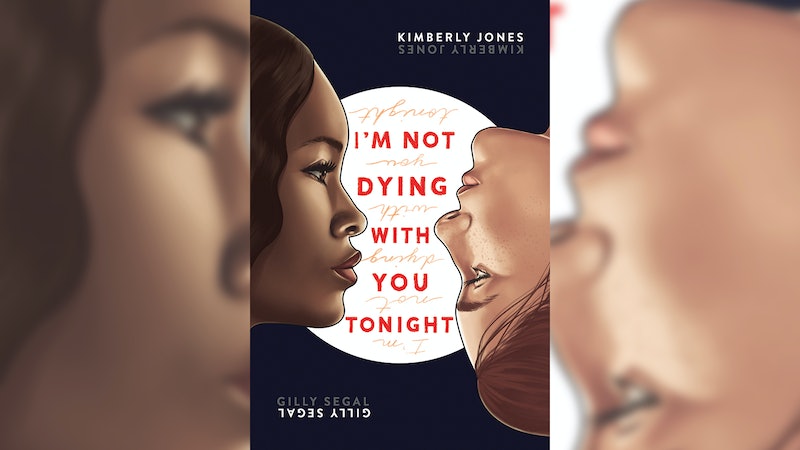 Young adult authors have tackled race relations with fervor, crafting stories both powerful and complex in books like All-American Boys by Jason Reynolds and Brendan Kiely, The Hate U Give by Angie Thomas, and Dear Martin by Nic Stone. And a new book is being added to this canon — this one focused on the story of two teenage girls: On Oct. 1, 2019, I'm Not Dying With You Tonight by Kimberly Jones and Gilly Segal will be published. Bustle has the cover reveal and exclusive chapter excerpt below!

I'm Not Dying With You Tonight is a dual-POV narrative about two teen strangers Lena and Campbell — one black and one white — who must rely on each other to safely make it through the night when their small town is engulfed by riots after a fight breaks out at their racially divided Atlanta high school.

It's a unique take on a topic that has only become more important to discuss widely in the last few years. Check out the cover below, and keep reading for an excerpt from I'm Not Dying With You Tonight below:

“Waiting for Black is on your agenda, not mine,” LaShunda barks as we leave the building.

I ain’t think she was gonna wait, no way, that ain’t what I was anticipating. I know she’s got responsibilities at home, but she knows I hate sitting out here by myself. If you ask me, this is really about her hating on Black. As usual.

“It don’t cost you nothin’ to walk away,” I snap back.

LaShunda cackles. “Can your grandfather stop speaking through your body?”

“I don’t know what you talkin’ about.” I flip my hair over my shoulder, but she got me laughing like she always does. “Pops got all the best sayings.”

She shakes her head and then looks down at my feet. “Anyway, I see you got them.”

A big smile takes over my face. LaShunda never misses anything I do. She knows me, like, really knows me, and she knew that statement would perk up both our moods.

“Bitch, you know they better than cute — they are fire, best friend. If I thought I could cram my size tens into them, I’d be trying to borrow them ASAP,” LaShunda says.

“I saw some size tens in a different style as cute as these. Let me turn a few more checks, and I’m going to hook you up.”

“Go, best friend. That’s my best friend,” she sings, and we both laugh. Her granny, Miss Ann, house is really her house. Miss Ann works two jobs and drives for Uber. LaShunda does all the laundry, cooking, and watching of her three bad, little cousins. Even though she works real hard, she’s not able to have an after-school job or anything. That’s why I love splurging on a pair of fly shoes for her when I can. I like being that person in her life who gives her the little extras. “So are we going to this game-slash-fund-raiser-slash-turnup-slash-piped-up lituation?”

"LaShunda does all the laundry, cooking, and watching of her three bad, little cousins. Even though she works real hard, she’s not able to have an after-school job or anything. That’s why I love splurging on a pair of fly shoes for her when I can."

“Yes, ma’am, you know if we don’t see the Dolls dance at halftime, they will kill us.”

“You ain’t never lied.” LaShunda winks. “NaNa, let me get out of here before Gram kills me.”

Anyway, it’s okay she has to go. Some days you just want to be alone with your man, and for me, this is one of those days. I’ve been missing him. He’s been grinding so hard lately that we never get to see each other. He always smells good enough to eat. He puts aftershave right on his neck too, because he knows I like to rest my head on his shoulder and just breathe him in. Ooh, that man does something to me. He makes my head spin. I’m so caught up thinking about his fine self that I don’t notice LaShunda walking away until she yells back at me.

“Love you later,” I shout. She hates goodbye. That’s the last thing her mom said to her before she passed away from a heroin overdose. She’s never said the word goodbye to anyone since.

I think about texting Black but that will only aggravate him. I know he’s coming, and he always says, what’s understood doesn’t need to be said. Not a minute later, he pulls up, bumping the new Kelechi album loud as he can. He has such amazing taste in music. He can’t stand trap music and only listens to real emcees who don’t do all that cursing and hating on women.

"I think about texting Black but that will only aggravate him. I know he’s coming, and he always says, what’s understood doesn’t need to be said."

“Did somebody request an Uber?” He smiles, leaning toward the passenger window.

“I did. I hit the button for cute, so I wasn’t expecting fine. Is it the same fee?”

“Uber Black is usually a little more, but I lower the rate when the rider is fine too.”

We both laugh, and I get in. I lean over to hug him, and he smells as good as I expected. I almost don’t want to let go. I lift my face for him to kiss me and melt into him. His soft lips press against mine, and it feels like sun rays warming my skin.

I gently pull away. “I need to go home and get myself together to be cute at the football game tonight.”

“The game?” He starts the car and pulls out. “Since when is that something you do?”

“My girls doing the halftime, and I’m a good friend, jerk.” I push his shoulder playfully. “But you know, I don’t plan on staying longer than their show. So I’ll have some free time left before curfew.”

"I lean over to hug him, and he smells as good as I expected. I almost don’t want to let go. I lift my face for him to kiss me and melt into him. His soft lips press against mine, and it feels like sun rays warming my skin."

I roll me eyes as I get out of the car. I walk in my house and head to the kitchen for a snack.

“What you doing?” Pops asks, not looking up from the sink as he washes the dishes. I have no idea why my grandfather won’t use the dishwasher. I refuse to hand-wash dishes, my nails too delicious to be ruined by Palmolive.

“Just making a snack before I get ready for the game.” I sigh. Black usually leaves me in the most amazing mood, except for when he plays like he Hansel, leaving me crumbs.

“What’s got you down in the mouth?”

“Don’t need to. I can hear it. I reckon it’s ’cuz of that little knucklehead you just got out the car with.”

He interrupts, “Go to lying and the only game you gon’ see tonight is Wheel of Fortune on the Game Show Network. If you had a nice boy, there would never be a need to lie.”

“Go on, little liar on the prairie.”

I don’t care what Pops says as long as he don’t say I can’t go to the game. Imma try to hook up with Black later. I think tonight can end better than we just left it in the car.

Want more from I'm Not Dying With You Tonight? Check out the first three chapters here!