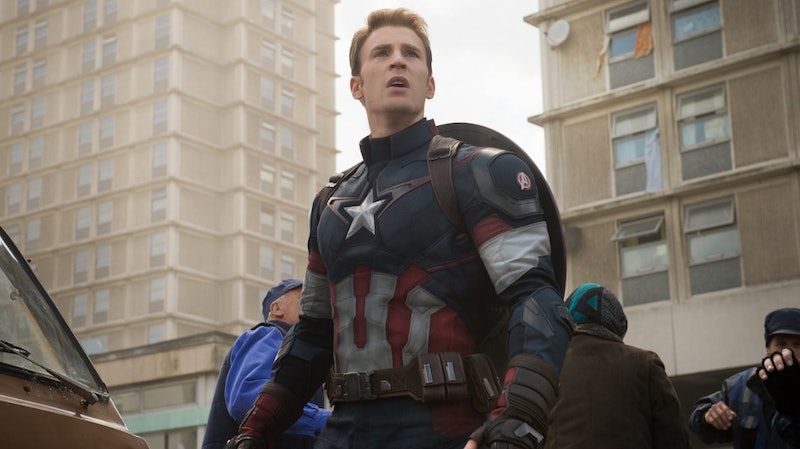 Captain America's been the moral compass of the Marvel Universe for over five films, but with rumors swirling and contracts ending, it's possible that Chris Evans is done playing Captain America after Avengers 4. But is that really the case, or will the beloved actor pick up the shield for a few more movies?

Astute observers have been curious what Evans' plan was since way back in 2014, when i09 noted that his six-film contract was trumped by Bucky Barnes actor Sebastian Stan confirming a nine-movie deal. Why would a second fiddle get three movies more than the leading man, unless Marvel execs were planning ahead for Evans leaving and paving the way for Stan to step up in his place?

Evans himself expressed reluctance about returning to the role back in 2016, when he told Rolling Stone that Civil War was definitively "the last installment of Captain America". The actor already seemed burned out by Hollywood and the Captain America franchise in particular saying, "Since 2010, I've never gone more than a year without putting that f**kin' thing on," referring to Captain America's suit. Considering his attitude on the issue, it came as a surprise to many fans when Evans extended his contract to include two more films.

Evans signed on not only for Infinity War, but also and most importantly for the as-yet-untitled Avengers sequel that's going to follow it. Speaking to The Telegraph, Evans gave a very Captain America reason for the extension — loyalty and a sense of honor. "I had six films in my Marvel contract, so I could have said after the third Avengers I was done, but they wanted to make the third and fourth Avengers films as a two-parter," h explained. "They said they had so many other characters to fit in...and couldn’t get them all into one movie.”

The internet's been abuzz over Evans' recent New York Times interview, where the actor explained why he's stepping back from the role he made famous. “You want to get off the train before they push you off,” he said, and combined with his Rolling Stone interview emphasis on disliking press junkets and wanting to expand his repertoire, the move makes a ton of sense. Taking a major franchise off your schedule certainly leaves a lot more room for other projects, including, as the NYT noted, Evans' current role as a creepy security guard in the stage drama Lobby Hero.

But for fans already mourning the loss of the noble Avenger, hope isn't completely lost. After all, Evans already extended his contract once, and after a break who's to say he won't want to don the blue, white, and red suit again? Evans' attitude seemed to reflect exhaustion and anxiety surrounding the Marvel Universe more than a dislike of his role. In a 2017 interview with Collider, when asked point-blank if he'd really be done playing Cap after the next two films, Evans said, “I’m not going to sit here and say, 'No more.' I think Hugh Jackman has made 47 Wolverine movies, and they somehow keep getting better."

If he keeps playing Cap, Evans will certainly make fans so, so happy. The actor's personality just seems to fit Captain America, or perhaps Captain America has become synonymous in fans' minds with Evans' honesty tinged with a hint of melancholy. As the actor explained to Collider, playing an MCU character so long is almost "like high school. You certainly always look to senior year, and then, all of a sudden, senior year happens and you’re like, 'I don’t know if I’m ready to go.' It’s tough thinking about not playing the guy.”

For now, Evans' work is complete after the next Avengers outing, and Marvel doesn't seem in a rush to recast the character, opting instead for other characters to step up to the plate. Seems like both sides are leaving the opportunity on the table for Evans to pick up his shield once again.